This week, we at Bourse discuss a subtle yet important development in the global investment landscape, specifically the diverging path of interest rates in major emerging and developed investment regions. While some of the major developed, low-growth economies seem to be on the cusp of increasing interest rates, emerging markets with higher growth trends are now doing just the opposite.

The direction of interest rates is a signal to investors on the outlook for economic growth and can play a vital role in general market sentiment. We explore some of the recent and upcoming international monetary policy decisions and their impact on global markets.

The central banks of the three largest emerging markets by nominal GDP, China, India and Brazil, are currently in a monetary easing cycle against a backdrop of moderating inflation and stimulating economic growth.

Even in the midst of a recession driven by low commodity prices, weaker global growth and some economic indiscipline, the Brazilian Central Bank has lowered its benchmark interest rate by 25 basis points to 14% from 14.25% where it has been maintained since July 2015. This decision comes on the heels of an improvement in inflation over the past 10 months, falling from 10.7% in January 2016 to 8.3% in October.

The much anticipated move by the Central Bank followed a significant market rally of Brazilian assets, which have erased their losses since 2015. Brazilian equities have appreciated 85.1%, while an index of Brazilian sovereign bonds has advanced 71.6% year-to-date in USD terms. 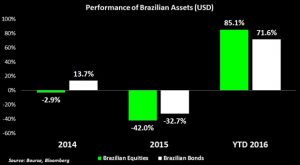 The country is expected to return to positive economic growth in 2017 with modest expansion of 0.5% (IMF World Economic Outlook – October 2016) after several years of decline. The launch of this long-awaited monetary easing cycle is seemingly a step in the right direction on the road to stimulating the economy into recovery.

Identified as one of the few “bright spots” by many research houses and the IMF, India is on a path of sweeping reforms intended to boost growth and cement itself as a favoured investment destination. Measures that have improved the country’s taxation structure and the ease of doing business, as well as vigilant monetary policy measures have stimulated greater investor appetite in India.

In a largely unexpected move by the Reserve Bank of India (RBI), the key interest rate was cut by 25 basis points to 6.25% on October 4th 2016. With inflation being one of the biggest concerns of the Indian economy, the recent rate cut signalled expectations of further cooling of inflation and a fillip to economic growth. Consumer inflation has been on the decline as a result of a favourable monsoon season and government policies which have helped to curb food prices. The RBI has cut the interest rate by a total of 1.75% since January 2015.

More rate cuts in India would stimulate additional capital investment and economic growth. A more upbeat view of the economy would fuel a bullish outlook for Indian equities, which have outperformed an index of world equities year-to-date. Most analysts predict two additional rate cuts in the next six months, so long as inflation remains under control. No rate cut is projected in December 2016, as the RBI may want to monitor the impact of a probable rate hike by the Federal Reserve (the Fed). 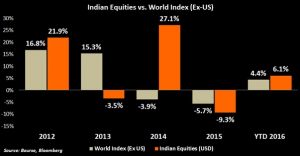 The largest emerging market, China, has reduced its benchmark lending rate by a total of 1.65% in the 12 months leading up to October 2015, when it was last cut to 4.35%.  The People’s Bank of China (PBoC) faces the dilemma of whether to maintain the rate at the current level so as not to exacerbate the risk of asset bubbles, or to cut rates to stimulate economic growth which has been a major concern for the Asian region as well as the global economy.

Indeed, China’s softening growth trajectory continues to be a major theme in the overall global growth/interest rate relationship, affecting both the developed and emerging economies. Should China’s growth continue to slow, as projected by the IMF, global interest rates will likely follow suit as more economic stimulus would be required to maintain growth. A more guarded approach to the Chinese market may be warranted, as the outlook for economy and the direction of interest rates remains uncertain. 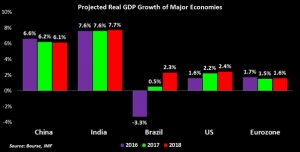 Divergence in the developed world

While many emerging markets have room for more expansionary policy actions, the same cannot be said for major developed markets like Europe, Japan and the US. All three have set interest rates at zero or near-zero levels to combat weaker economic growth trends.

However, while the stances of the European Central Bank (ECB) and the Bank of Japan (BOJ) remain accommodative (no rate hikes imminent); the US Fed is on track to hike rates further from its 25 basis point increase in December 2015. This is mainly attributable to positive economic fundamentals related to economic activity, employment and consumption. Based on analysts’ consensus, there is a 74.2% chance that the Fed will hike in December 2016, increasing the rate range from 0.25%-0.50% to 0.50%-0.75%. According to the IMF, while growth in the Eurozone is expected to moderate, the US is projected to expand by 2.2% and 2.4% in 2017 and 2018 respectively.

Monetary stimulus and policy, particularly in the US, has been a shot in the arm for global markets over the past several years. Many observers would attribute the longest rallies in recent market history more to Central Bankers’ policies than robust economic recovery and growth. With US interest rate policy set to change, however, there could be the introduction of some volatility to both equity and bond markets. Indeed, the first US rate hike in December 2015 brought with it uncertainty and lower investor confidence, sparking declines in both developed and EM markets in the first quarter of 2016. It should be noted, however, that this moment of weakness was eventually reversed and markets are broadly in positive territory year-to-date. 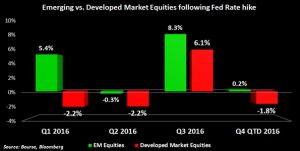 While there could be a return to volatility on the next announcement of a rate increase, financial markets may not be as surprised as they were several months ago.

With the major emerging markets of Brazil and India, decisions on further interest rate cuts are heavily dependent on internal economic fundamentals, rather than the path of US interest rates. As such, investing in both Brazil and India during an expansionary monetary cycle makes sense in the medium term. In Brazil, the bottoming out of the recession coupled with the prospect of lower borrowing costs may provide a good entry point despite the market’s outperformance thus far, as the potential for long term growth exists.  The Indian economy continues to be a source of optimism as the passage of reforms and the continuation of monetary stimulus will set the groundwork for better economic performance.

In general, (i) falling interest rates should positively impact growth trajectory from an economic standpoint in EM markets and (ii) hikes in interest rates by the US and other major central banks could prompt an increase in volatility across financial markets, providing possible entry points for investors. Investors should consider these two regions as part of a well-diversified investment portfolio through investing a mutual fund that can provide return on their US dollars

For investors interested in USD investments which provide asset and currency diversification, equity mutual funds are a sound option for those in the moderate risk category. They are professionally managed, hassle-free investments that give access to global market returns. With the TT equity market projected to decline further over the next 12 months, diversifying away from TT assets is preferred. Investment options like these are available locally through Bourse or other providers. The Bourse Brazil Latin Fund (BBLF), as well as funds offered by other local providers, covers the Latin America region and is a USD mutual fund listed on the local stock exchange. The Bourse Savinvest India Asia Fund (SIAF) provides direct access to the Indian equity market as well as other major Asian jurisdictions. Other local USD funds also offer access to Asia. With the local stock market projected to decline 4%-5% in the next 12 months, it has become increasingly important to diversify by geography and currency.

As covered in last week’s articled titled, “Focus on Fixed Return Investments”, investment grade emerging market bonds are also an attractive option for investors with a store of US dollar. Year-to-date, USD denominated investment grade emerging market bonds would have returned roughly 11% in interest and capital appreciation while USD denominated high yield bonds would have returned 18% over the same period. For investors with an interest in fixed income instruments, Brazilian and Indian USD denominated bonds can serve as a welcome addition to one’s portfolio. We at Bourse actively track USD denominated bonds in both Brazil and India, some of which offer a yield to maturity in excess of 5% in Brazil and over 3% in India.