This week, we at Bourse take a closer look at the performance of two manufacturing stocks listed on the local exchange; The West Indian Tobacco Company Ltd (WCO) and Trinidad Cement Limited (TCL). We share our perspective on both companies given the current economic climate, as well as any potential impact of taxation and other changes on future performance.

For the nine months ended September 30th 2016, TCL reported significantly lower Earnings per Share (EPS) of $0.12 versus $1.19 in the comparable period a year prior. The 90% fall in earnings resulted from lower revenues and abnormal expenses in the current period, as well as the non-recurrence of one-off gains which buoyed EPS in 2015. Even after adjusting for these anomalous gains and losses in both periods, TCL would have generated EPS of approximately $0.25 in 9M 2016 against $0.59 in 9M 2015; a still substantial decline of 58%.

Revenues for the nine month period declined 12.3% ($201.7 million) from $1.6 billion to $1.4 billion. The company cited the fall in construction activity in its domestic market, Trinidad and Tobago as well as weak demand across the Caribbean. According to the latest available data, local cement sales during the January to August period fell 21.6% from 461,664 tonnes to 361,820 tonnes.

The company incurred a total of $100.2 million in restructuring costs for the period, with 73.1 million attributed to a change in accounting policies with regard to inventories, and $27.1 million to severance costs during the manpower restructuring process. The comparable period in 2015 reported no such costs and also benefitted from a debt restructuring gain of $205.8 million which was one-off in nature. Consequently, profit before taxes decreased 79%, from $471.3 million to $97.9 million while after-tax profits declined 86.4% ($362.3 million) from $419.3 million to $56.9 million.

TCL’s main revenue drivers, Trinidad and Jamaica, were negatively affected by planned maintenance shutdowns in order to improve efficiency. However, it is expected that operations in Trinidad are expected to continue to be challenged by the softening economic landscape. Reduced or delayed government spending in many infrastructure projects could adversely impact TCL’s revenue generation going forward.

While there is a somewhat more optimistic outlook on economic growth in Jamaica (projected to grow 1.7% and 2% in 2016 and 2017 – World Bank), the country is still addressing its high debt position and is mainly focused on its fiscal management. These measures may have the effect of constraining the level of spending by the government. 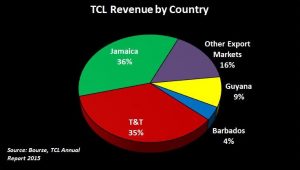 TCL continues to improve its debt metrics, with its total debt financing decreasing from $1.16 billion in FY 2015 to $1.08 billion as at 9M 2016. Long term debt decreased by 94.9 million from $976.5 million at the end of 2015 to $881.7 million. At the end of 2015, 74% of TCL’s total debt was USD denominated while the remainder was denominated in local currencies. The impending increase in US interest rates would likely increase the company’s debt burden as 100% of its remaining borrowings constitute floating rate debt. USD debt was issued at LIBOR plus 5.5%, whilst TTD debt was issued at the 3-month Treasury Bill plus 5.5%. Both LIBOR as well as the 3-month TT treasury rate have effective floors of 0.75%.

TCL’s debt restructuring and recapitalization should provide long term benefits for the company and its shareholders. In the current economic environment, however, the cyclical nature of the construction industry and general investment in infrastructure on both the public and private sector levels will likely remain challenged. Accordingly, TCL’s revenues and profitability could continue to be adversely affected by weak domestic and regional demand.

At a current price of $3.39 and 12-month reported EPS of $0.12, TCL is trading at a P/E of 27.8x. When adjusting for one-off items, trailing P/E is estimated to be 14.1x. The stock’s historically inconsistent dividend payments may prove to be less attractive to investors, who would seek equities which provide some stream of income while companies work through the prevailing recessionary environment. On this basis, Bourse places a SELL rating on TCL.

WCO generated EPS of $4.42 for the 9 month period ended 30th September 2016, a 5.2% uptick from the $4.20 generated a year prior. This performance was manly driven by higher Gross Profit Margins as well as significantly reduced operating expenditure.

WCO will likely face some headwinds to future performance. The Honourable Minister of Finance, during the FY 2017 budget speech, announced a 15% increase to excise and customs duties on all tobacco products produced and imported into the country. Stemming from this increase effective 20th October 2016, it is likely that WCO will face sustained pressure on volume sales as higher prices, if imposed on consumers, may deter consumption of WCO’s brands.

WCO is also likely to face continued competition from black market tobacco product suppliers, who allegedly place products into the marketplace without attracting the same levels of taxes.  These black market issues may become even more widespread as taxes continue to rise and WCO is forced to pass increased costs to consumers. Effective January 1st 2017, corporations earning in excess of $1M in Profits Chargeable to Corporation taxes, which includes WCO, will pay taxes at a rate of 30% on all incremental chargeable profits above $1M. The first $1M will be taxed at the current 25% tax rate. 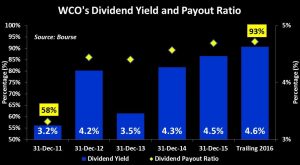 Priced at $127.00, WCO is trading at a trailing Price Earnings (P/E) multiple of 20.0x, slightly below the manufacturing I average P/E of 21.2x. As it is, WCO pays 92.7% of its earnings to investors, representing the highest pay-out ratio within the sector; where on average 63.5% of earnings are distributed. WCO announced a 3rd interim dividend of $1.44, payable to investors on November 24th 2016. The stock will trade Ex-Dividend on November 3rd 2016. Despite its attractive dividend yield of 4.6%, the potential to increase dividend payments is limited in the absence of earnings growth, in the context of an already high dividend payout ratio.

Given that approximately 90% of revenues are generated within Trinidad, higher revenue-based and earnings-based taxes, coupled with more intense (though unfair) competition and the realities of a contracting economic climate present several challenges to WCO’s ability to maintain current levels of revenue and earnings. Offsetting these headwinds to some extent is the fact that WCO shares are often closely held by investors. On this basis, Bourse maintains its NEUTRAL rating on the stock.