This week, we at Bourse take a closer look at developments in both the domestic and international bond markets. We examine the main factors driving the direction of interest rates and bond yields, as well as the possible implications of interest rate movements on investors going forward.

The Trinidad & Tobago yield curve has shifted upward over the past twelve months as at September 2016, with yields on short, medium and long-term bonds increasing. The 1-year TT treasury yield and 10-year TT treasury yield stood at 2.8% and 4.4% respectively as at September 2016, when compared to 2.3% and 3.3% in September 2015. This upward trajectory has implications for TTD fixed-income portfolio valuations, as well as investor’s demand for TTD bonds given the relatively more attractive yields.

The latest Monetary Policy Announcement by the Central Bank of Trinidad & Tobago (CBTT) on September 30th 2016, highlighted sluggish energy and non-energy economic activity, as well as muted aggregate demand. Private sector credit also lost some momentum in recent months, with lending to businesses contracting by -0.2% year-over-year in July 2016. In the context of lower growth and activity, the CBTT maintained the Repo rate at 4.75% at its September 2016 meeting. 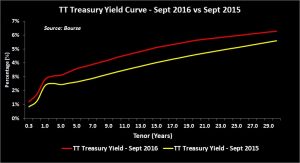 As a result of the 200 basis point increase in the repo rate from September 2014 to date, the Prime Lending Rate (Median) – the lending rate charged by commercial banks to their most credit-worthy customers – increased by 150 basis points from 7.50% to 9.00% over the same period. On the other hand, the savings deposit rate at commercial banks has been relatively sticky with the ordinary savings deposit rate at commercial banks unchanged at 0.2% over the same period. This does not bode well for savers, whose real rate of return is presently negative given the current headline inflation rate of 3.1%. Despite the marginal uptick in Money Market rates by some mutual fund providers, there is still a disincentive to save as TTD MMF rates currently average 1.32%, resulting in a negative purchasing power for investors.

While domestic bond yields could be influenced by a number of factors, the primary drivers in the near-term would include government borrowing activity, financial system liquidity and investor demand.

From the FY2017 National Budget, the fiscal gap to be funded – after one-off revenue and other non-recurring measures – stands at TT$6 billion or 3.9% of GDP. Should the Heritage and Stabilization Fund (HSF) be left untouched, this would likely mean a return by the government to the local bond market. Borrowing in the local market of such a magnitude could place upward pressure on TT dollar bond yields. Increased borrowing would also lead a deterioration of debt to GDP metrics and place further pressure on the country’s credit ratings, already facing challenges of lower energy prices and production.

In terms of liquidity, commercial banks’ average excess reserves remain around TT$3.2 billion. While excess liquidity has appeared to decrease over the past several months, it should be noted that excess liquidity could rise with a change in monetary policy stance. In particular, the primary reserve requirement – the percentage of deposits which must be held at the CBTT – currently, stands at 17%. A decrease in the required ratio, as recommended by the International Monetary Fund in its 2016 consultation with Trinidad and Tobago, could significantly increase excess liquidity. For example, given total commercial bank deposits of TT$106 billion as at June 2016, a 5% decrease in the reserve requirement from 17% to 12% could result in an additional TT$4 billion increase in excess reserves. This excludes US dollar reserves of US$3.9 billion, the equivalent of TT$26 billion. This result would be downward pressure on bond yields as banks put excess liquidity to work in the capital markets, in the absence of aggressive loan demand. The State could, as a consequence, benefit from lower costs of borrowing.

With regards to investor demand, there would appear to be considerable appetite for TTD government fixed income investments from individuals and particularly large institutional investors. A relative dearth of TT dollar investment instruments, growing liquidity and an economic environment encouraging a ‘safety first’ approach would all contribute to resilient investor demand, which could place downward pressure on local bond yields.

Notwithstanding this, we hold the view that, in the absence of a reduction in either the repo rate or required reserve ratio, local bond yields may continue to rise on the basis of extensive government borrowing and the likely deterioration in the credit rating of the government of Trinidad and Tobago.

The International Monetary Fund in its October 2016 World Economic outlook revised its outlook for global growth downward by 0.1% for both 2016 and 2017 to 3.1% and 3.4% respectively. The subdued outlook stems from uncertainty in advanced economies caused by political developments (such as Brexit) and lower growth in the US. Accordingly, monetary policy, particularly by the European Central Bank (ECB) and Bank of Japan (BoJ), remained accommodative, placing downward pressure on global interest rates. On October 20th 2016, the ECB held its prime interest rate at 0% and maintained it asset-purchasing program.

When pitted against the low and in some cases negative yields offered by developed market bonds, the higher yields of EM bonds continue to entice investors seeking greater returns. Being the preferred destination for investors in the fixed income space this year, EM investment grade bonds provided returns of 28% and 9% over a 5-year and 1-year period respectively, while EM high yield bonds returned 51% and 15% over the same period. This total return includes both price movements and interest earned over the respective periods. Therefore, an investor who acquired US$100,000 in EM investment grade bonds 1 year ago, would have benefited from US$9,000 in total returns. While US equities provided higher returns over a 5-year period, emerging market bonds outperformed on a 1-year and year-to-date basis.

The looming divergence in monetary policy by the US Federal Reserve could, however, pose a threat to the emerging bond market momentum. Despite the pronouncements by the US Federal Reserve (the Fed) to leave the target range for the federal funds rate at 0.25 percent to 0.50 percent at its September meeting, the possibility of a rate hike by year-end remains on the table. With a 67% probability of a rate hike at the December 14th 2016 meeting, a further strengthening in US inflation and labour market data may firm up the case to raise interest rates.

Outlook for US Interest Rates

Given the sluggish outlook for the global economy, major monetary policymakers are likely to continue with monetary stimulus, with the exception of the US. The ECB, BoJ, Bank of England and Reserve Bank of India all remained accommodative at their last respective monetary policy meetings. Should interest rates (and bond yields) rise, the consequent decline in bond prices is likely to present an entry point for investors holding hard currency. US dollar denominated, emerging market investment grade bonds maturing in 5-7 years would become an increasingly attractive investment opportunity to consider.

USD high yield emerging market bonds maturing in 5-10 years currently offer yields in the range 4% – 6% to investors. Similar rated regional corporate issuers such as Sagicor (5.5%) and Petrotrin (4.74%), as well as sovereign issuers such as Jamaica (4.93%) also offer yields in this region. Of noteworthy mention is the latest addition to the regional sovereign bond space, the Republic of Suriname, who tapped into international debt markets on October 19th 2016 to raise USD550 million in financing. The new issue matures in October 2026 and has a coupon rate of 9.25%. For investors with a riskier appetite and in search of a steady stream of income, this may be a suitable fit.

Also worth mentioning, are the new proposed notes due 2027 by Trinidad Generation Limited (TGU) – the power generation plant wholly owned by the government of Trinidad and Tobago. Credit rating agency Fitch assigned a ‘BBB-’ rating to the issue, reflecting the company’s state ownership, stable cash flows and TGU’s strategic importance to the state. Given TGU’s close alignment with the state, the notes are likely to be issued at a yield similar to GORTT’s current bond due 2027 of 4.1%.

At present, investing in the TTD space for the long-term may provide investors with positive real returns assuming inflation remains contained, on the basis that TT dollar bond investors are prepared to invest for longer periods (on average, 10 years). However, the purchasing power of persons holding their funds in a TTD savings account will continue to erode. The same holds for USD savers and investors. Investors’ holdings USD emerging market bonds would have earned a positive real return since December 2014 to date, while USD savers would have earned a negative real return.

With the broad menu available to select from when investing in the USD bond market, it makes sense to consult an experienced investment adviser, like Bourse, to help make better-informed decisions in building your portfolio.

For the detailed report and access to our previous articles, please visit our website at: https://bourseinvestment.com. For more information on these and other investment themes, please contact Bourse Securities Limited, at 628-9100 or email us at invest@boursefinancial.com.