This week we at Bourse review the nine-month financial results of two stocks within the Manufacturing 1 sector, Angostura Holdings Limited (AHL) and One Caribbean Media Limited (OCM). Both AHL and OCM continue to confront economic challenges which have negatively impacted revenue and profitability. We highlight some key areas of the performances and provide an outlook. 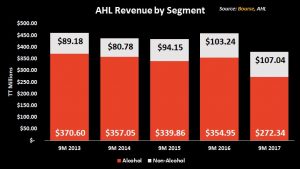 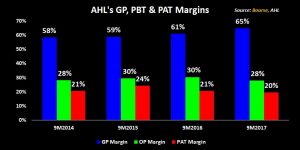 AHL has managed to maintain relatively stable margins over the past four years., however with declining revenue it is critical to reduce cost to improve margins. The last quarter, typically the strongest for the firm, of 2017 may see some improvement in the due to seasonal demand. Cost containment will be of key importance in improving efficiency. On a positive note, AHL’s USD earnings from its international markets should provide a partial hedge against any potential TTD devaluation.

The Honourable Minister of Finance once again referred to AHL as a potential divestment of the State, in its attempt to recoup some of the funds owed by the CL Financial Group. Notwithstanding its weaker financial performance, AHL possesses a very valuable asset: the Angostura brand. The resilience of AHL’s stock price may be a reflection of investors’ confidence in the potential value of the Angostura brand.

At a current price of $15.05, AHL trades at a trailing P/E of 30.71 times, above the Manufacturing 1 sector average of 22.72 times (excluding Guardian Media Limited). The stock offers a trailing dividend yield of 1.8%, below the sector average of 3.7% (excluding GML). On the basis of a strong international brand with stable USD earnings, but tempered by lower earnings, Bourse maintains a NEUTRAL rating on AHL. 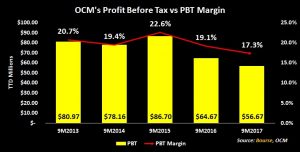 OCM’S revenue generation remains cyclical, driven by media events including elections and sporting events such as the World Cup and the Olympics. The cyclicality acts as a double edged sword for the company’s profitability, being a boon with increased event activity (as seen in 2015 during elections) and missed in the absence of the same. Profit before Tax has declined 30.0% over five years. OCM, like most companies within the Manufacturing 1 sector, will likely continue to face revenue pressures due to recessionary conditions. In addition, competition is more astringent, with the growing popularity of social media presenting a cheaper and more convenient medium for advertising.

According to the Chairman’s Report, the 3.0 % decline in revenue was attributable to contractions in advertising, compounded by new taxes in the Barbados market. In keeping with the Group’s strategic growth initiatives, OCM announced the acquisition of a 51% interest in Green Dot Limited, which specialises in Broadband and Cable Television. In 2016 OCM generated EPS of $0.82 and was able to pay dividend totalling $0.76. With lower earnings anticipated in 2017, the Group may encounter difficulties in sustaining comparable dividend payments from current earnings. 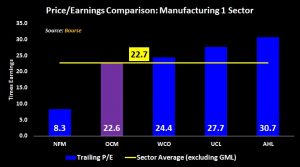 At a current price of $14.00, OCM’s share price has retreated 30.0% year-to-date. OCM’s trailing P/E of 22.6 times is in line with the Manufacturing 1 sector P/E of 22.72 times. The stock currently offers a trailing dividend yield of 5.43%. OCM has held trailing dividend payments constant at $0.76 year-on-year although EPS has decreased 28.6%. As a result, the dividend pay-out ratio moved from78.4% in September 2016 to 122.6% in September 2017. A persistent depression of earnings could result in current dividend payment levels becoming unsustainable.

On the basis of OCM’s continued challenges with market contractions coupled with declining earnings and a high dividend pay-out ratio, Bourse maintains a SELL rating on OCM.