This week, we at Bourse take a closer look at the performances of Trinidad and Tobago NGL Limited (NGL) and The West Indian Tobacco Company Limited (WCO) for the third quarter ended 30th September 2017. Energy commodity prices have steadily improved throughout the year, resulting in an improvement of TTNGL’s Share of Profit from Phoenix Park Gas Processors Limited (PPGPL). WCO’s earnings declined for the period due to continued business challenges. We discuss the main factors, which affected the performances as well as provide an outlook. 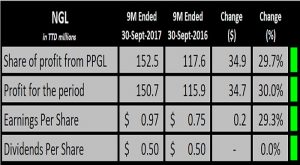 NGL reported Earnings per Share (EPS) of $0.97 for the nine-month period ended September 2017, up 29.3% when compared to the EPS of $0.75 earned in the comparable period in 2016. Total income increased $35.3M, moving from $117.7M in 9M 2016 to $153.0M in 9M 2017. The 30.0% increase was driven by improved profits from its 39% holdings in Phoenix Park Gas Processors Ltd (PPGPL). NGL’s Share of Profit from PPGPL climbed 29.7% for the period. PPGPL’s core business is natural gas processing, NGL aggregation, fractionating and marketing, with their primary products being Propane, Butane and Natural Gasoline. 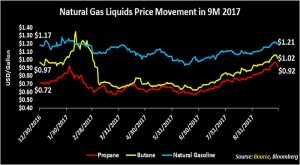 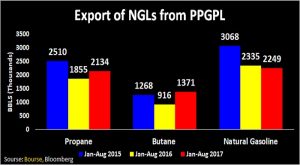 On the volume side, total exports of NGLs from PPGPL improved 12.7% during the first 8 months of 2017, when compared to the same period in 2016. However, export levels remain subdued when compared to 2015 levels (down 15.9%). In 2017, exports of Propane and Butane increased 15.0% and 49.7% respectively while Natural Gasoline decreased 3.7%. Moving forward, gas production is expected to improve as a number of new gas fields come on stream throughout 2017 to 2020. This could lead to improvements in production and export levels of NGLs, which will in turn be beneficial to PPGPL. 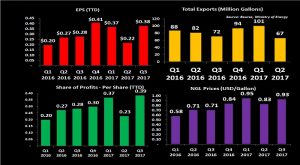 At a current price of $23.58, NGL trades at a trailing P/E of 17.09 times and offers investors a trailing dividend yield of 6.36%, the highest on the local exchange. NGL declared an interim dividend of $0.50 per share, which was paid on September 6th, 2017. This brings NGL’s trailing dividend to $1.50 for 2017, in line with 2016. NGL reported a cash position of $260.9M as at September 30th 2017, or roughly $1.69 per share. As a holding company with relatively limited cash expenses, this balance could become available for distribution to investors overtime.

On the basis of (i) a high trailing dividend yield, (ii) a relatively healthy cash position of $1.69 per share, (iii) the potential of continued stabilization / recovery of revenues through expected improvements in local energy production and global pricing and (iv) an implicit hedge against the TTD through its USD earnings, Bourse maintains a BUY rating on NGL 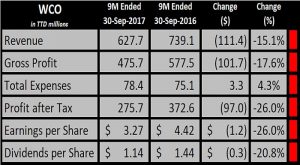 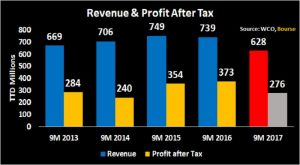 WCO continues to grapple with difficult economic conditions coupled with higher taxes on tobacco, and competition from illicit products. WCO’s reliance on imported raw materials in an environment where constrained access to foreign exchange could contribute to ongoing pressures on earnings production. 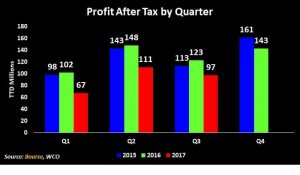 The decline in Profit After Tax represents the third consecutive quarter where earnings were lower in 2017 when compared to the corresponding period in 2016. The fall in earnings was accompanied by three consecutive declines in dividend payments. WCO has traditionally maintained a dividend payout ratio of over 90%. The trailing payout ratio is 103.2%. If revenue continues to fall, coupled with an unmatched decline in expenses, earnings and subsequently dividend payments are likely to continue to fall. 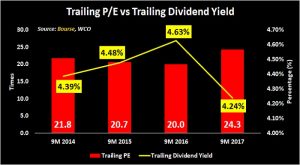 On the basis of (i) declining revenues and reduced earnings, (ii) lower dividend payments, and (iii) a relatively high valuation, Bourse revises its rating on WCO from NEUTRAL to SELL.