This week, we at Bourse review the performance of two stocks in the Non-Banking sector – Sagicor Financial Corporation Limited (SFC) and Guardian Holdings Limited (GHL) – for the third quarter ended September, 2017. Not surprisingly, both firms were negatively impacted by claims arising from the two major hurricanes during the period. We discuss the performance of both companies and provide an outlook. 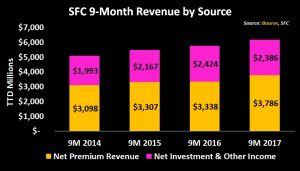 SFC has seen revenue growth in all of its segments. The Life, Health and Annuity Insurance (Individual and Group) segment, which represented 81.0% of revenue in 9M 2017, has grown 16.0% over the four-year period 9M 2014 to 9M 2017 and 7.7% in the past year. The Banking segment, which accounted for 13.3% of revenue, has grown 54.1% over the four-year period. Revenue from Property and Casualty segment (3.3% of revenue) increased 15.3% for the 9M period 2017. Nonetheless, this segment would have been negatively impacted by claims arising from the hurricane activity during the period. The Group recorded a net provision of (US $7.5M) TT $50.8M relating to claims exposure. This would have contributed to the 7.1% fall in Income before Tax. The 12.4% ($353.5M) increase in Benefits was attributable to a change in actuarial provisions in the Jamaica segment. 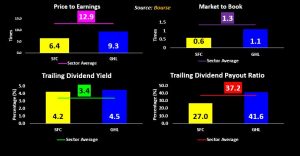 At a current price of $7.95, SFC trades at a trailing P/E of 6.3 times, below the Non-Banking sector average of 12.9 times. The Group’s market to book (M/B) ratio stands at 0.6, below the sector average of 1.3 .The trailing dividend yield of 4.3%, is above the sector average of 2.8%. SFC declares dividends in USD, which provides a hedge for investors against any possible depreciation in the TTD. On the basis of (i) continued revenue growth, (ii) relatively ‘cheap’ valuations (low P/E and M/B), (iii) an attractive dividend yield and (iv) a USD dividend hedge against the TTD, Bourse maintains a BUY on SFC. 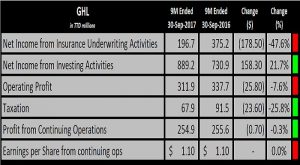 Guardian Holdings Limited (GHL) reported Earnings per Share from continuing operations (EPS) of $1.10 for the nine-month (9M) ended September 2017, in line with EPS of $1.10 reported a year earlier.

Net Income from Investing activities continues to represent a significant proportion of GHL’s revenue, increasing  from 49.4% of total Net Income in 9M 2015 to 81.9% in 9M 2017. Conversely, Net Income from Insurance underwriting activities has been declining, representing 33.9% in 2016 and only 18.1% in 2017. According to the Chairman’s Report, the sharp decline in Insurance Underwiting Activities for the period was as as result of hurricane related losses coupled with adjustments made to the Life, Health and Pensions devision .

Total Net Income from all segments (excluding Other consolidation adjustments) fell 2.1%% from 9M 2016 to the comparable period in 2017. The Life Health and Pension segment continued to be the main contributor to overall income, accounting for 60.7% of total Net Income in 9M 2017. Property and casualty fell 30.9% over the four-year period 9M 2014 to 9M 2017 and now represents for 22.8% of total Net Income compared to 36.0% in 2014. Operating Profit/ (Loss) from the Property and casualty business segment decline 58.5% from 9M 2016 to 9M 2017, owning to the one-off impact of two catastrophic hurricanes during September. However, GHL’s chairman stated that the Group has fully accounted for claims arising from the events amounting to $100.3M before tax.

. Notwithstanding the economic challenges in the GHL’s main operational territories, the Group’s core businesses maintained profitability. The upward trend in The Life Health and Pension segment could continue to promote profitability. 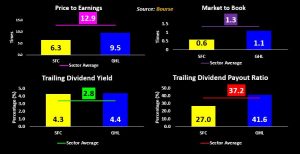 At a current price of $15.25, GHL trades at a trailing P/E of 9.3 times, below the Non-Banking sector average of 12.9 times. The trailing dividend yield is 4.2%, above the sector average of 3.4%. GHL continues to benefit from gains in Investing Activities but remains challenged with respect to Insurance Underwriting activities. On the basis of relatively attractive valuations, but tempered by continued challenges in its Insurance Underwriting activities, Bourse maintains a NEUTRAL rating on GHL.