This week, we review the 2016 performance of Trinidad Cement Limited (TCL) and GraceKennedy Limited (GKC). TCL was hit with one-off costs and lower revenues which negatively impacted earnings, while GKC reaped the benefits of growth in all of its segments. We look at their performance for the year and provide a brief outlook.

Notice was given in TCL’s audited financial report that on 24th January 2017, CEMEX, through its indirect subsidiary Sierra Trading, acquired 113 million ordinary shares of TCL, thereby increasing their shareholding from 39.5% to a majority stake of 69.8%.

Outlook
Recent efficiency measures implemented by TCL, among other initiatives, will prove key to future performance with the Group likely to face a cooling T&T market.

At a current price of $4.17, TCL trades at a trailing P/E of 41.7 times based on reported EPS. Historically, TCL has struggled to maintain consistency in dividend payments. After 7 years of no dividends, the Group made a payment of $0.04 on 1st July 2016. On the basis of a weaker T&T economy, more intense regional competition, and less-than-certain dividend payments to investors, Bourse maintains a SELL rating on TCL.

GKC’s higher revenues were driven by growth in all of its segments. Importantly for GKC, its Food Trading segment, which accounts for 78% of revenues, has continued to demonstrate strong performances in recent years. An improvement of 20% in 2014 and 1% in 2015, was followed by 10% growth in 2016. Looking ahead, this business line is expected to continue on a positive growth trajectory. 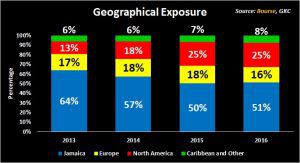 Jamaica remained the dominant market in 2016.  In recent years however, the Group has been diversifying to markets which earn hard currency, with greater focus on its North America market. This market, along with its European exposure, should help hedge against depreciation of the Group’s base currency, the Jamaican dollar.

On 28th February 2017, GKC’s Board of Directors approved an interim payment of TT$ 0.02, payable on 18th May 2017. It should be noted, however, that GKC pays its dividends in USD, providing an opportunity for investors to access US dollars via a TT dollar or Jamaican dollar investment. GKC’s trailing dividend yield is 2.13%, falling below the market average of 3.11%.

At a current price of $2.63, GKC trades at a trailing P/E of 12.34 times, in line with the Conglomerates sector average of 12.5 times. However, GKC’s 3 year average P/E stands at 9.23 times. The stock trades at a market to book of 1.2x, in line with its sector average of 1.4x. GKC’s price and P/E have both increased in recent years, reflecting investors’ positive sentiments surrounding the firm. In 2015 alone, the stock appreciated some 98%. Based on the firm’s continued improvement in profitability, but tempered by a low trailing dividend yield and a relatively high 3-year P/E, Bourse maintains a NEUTRAL rating on GKC.