This week, we at Bourse review the performance of FirstCaribbean International Bank (FCI), Scotiabank Trinidad and Tobago Limited (SBTT) and Scotia Investments Jamaica Limited (SIJL) for the quarter ended January 2017. FCI experienced a dip in Net Interest Income among other declines. SBTT benefitted from higher Net Interest Income, which positively impacted its Earnings per Share. SIJL continued its diversification strategy, as it aims to become less reliant on Net Interest Income. We take a closer look at the performances as well as provide a brief outlook.

FCI’s Interest Income fell while Interest Expense increased. The combined effect was a decline in Net Interest Income of TT$ 13.8M. Operating Income also took a hit, leading to a fall in Total Revenue by TT$ 33.2M. FCI incurred a higher Loan Loss Expense of TT$ 13.3M. Consequently, Profit Before Tax fell by TT$ 57.2M. The bank was faced with a lower effective tax rate of 4%, down from 11% in 2016. As a result, Profit After Tax experienced a shortfall of TT$ 33.4M. 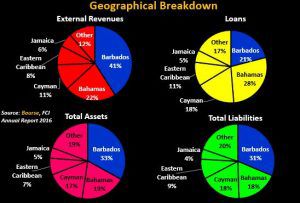 In 2016, 41% of external revenues was generated in Barbados. At the end of 2016, loans in Barbados accounted for 21% of the overall loan book.
On 3rd March 2017, international ratings agency, Standard and Poor’s (S&P), downgraded the credit rating on Barbados from B- to CCC+ (Junk), with a negative outlook. This reflects a decline in the country’s capacity to service its debt obligations, which in turn will result in higher borrowing costs. The downgrade was due to increased reliance on Central Bank financing of high government deficit and falling international reserves. The rating agency expects debt to GDP to continue rising to levels as high as 111% over the next three years, up from its 2016 level of 101%. S&P noted that this level of debt is “a key credit weakness, particularly given Barbados’s narrow, open economy”. 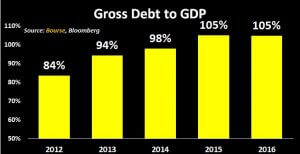 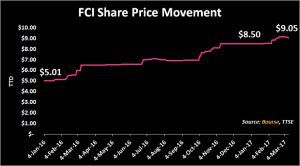 At a current price of $9.12, FCI trades at a trailing P/E of 15.6 times, above the Banking sector average of 14.5 times. The stock offers investors a trailing dividend yield of 3.7%, in line with the sector average of 3.8%. FCI rallied 69.6% in 2016 and is already up 6.5% Year-to-Date. In the event of adjustments to the Barbados dollar, FCI’s revenue will be negatively impacted. As a result, Bourse revised its rating on FCI from BUY to NEUTRAL. 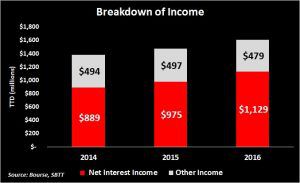 Over the last three years, SBTT has had a steady increase in its Net Interest Income, rising by 27% or $240.16 M. In the first quarter of 2017, the positive change in Net Interest Income was $39.4 M. This was attributed mostly to improvements in the company’s retail loan portfolio and investment securities which advanced by $467.1 M and $60.64 M respectively. Other Income has remained steady over the course of three years. Furthermore, due to the company’s ability to control its non-operating expenses, its productivity ratio has improved to 38.8% during the first quarter, which compared favorably to the 43.6% reported in the prior period. Notably, the company’s efficiency ratio has been better than its local competitors; First Citizens Bank Limited (FIRST) and Republic Financial Holdings Limited (RFHL). 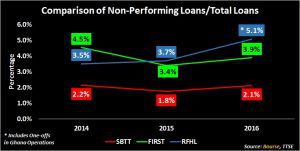 In terms of non-performing loans as a percentage of gross loans, SBTT recorded a ratio of 2.1%, a marginal increase from 1.8% reported a year earlier but still better than its domestic competitors.

Despite the slowdown in economic activity, SBTT has been able to increase its EPS by $0.08. To this end, it is likely that its FY EPS could come in somewhere between $3.65 and $3.70. At a current price of $58.75, this would represent a forward P/E of around 16 times.

On 7th March 2017, SBTT declared an interim dividend of $0.50, payable on 13th April 2017. This payment represents an increase of 25% when compared to $0.40 paid in 2016. Its trailing dividend yield currently stands at 3.57%, which is marginally lower than the Banking sector average of 3.82%. SBTT trades at a trailing P/E of 16.23 times, above its sector average of 14.36 times This however  is marginally below its three-year average of 18.1 times. Despite some positive developments, the company’s ability to generate further loans will be challenging given the contraction in the local economy, which is likely to persist in the near future. In light of market conditions and fair valuations, Bourse maintains a NEUTRAL on SBTT. 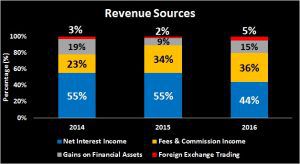 Looking ahead, SIJL will need to continue growing its funds under management in order to benefit from higher fee and commission income, as it strives to diversify its revenue source. The Group managed to reduce operating expenses by 2.7% Y-O-Y. Expense management will also be important in order to maintain or increase efficiency.

SIJL declared an interim dividend of TT$ 0.02, payable on 19th April 2017. At a current price of $2.19, the stock offers investors a trailing dividend yield of 4.35%, above the Non-Banking Finance sector average of 3.1%. Although dividends are declared in JMD, it is paid in USD, thus providing investors with the opportunity to invest TTD, and earn USD through its dividend payments.

The current price of $2.19 results in a trailing P/E of 12.7 times, above its sector average of 10.7 times (excluding N.E.L.). This is also above SIJL’s 3-year average P/E of 9.4 times. On the basis of SIJL’s stable earnings and attractive dividend yield, but relatively high P/E multiple, Bourse maintains a NEUTRAL rating.