This week, we at Bourse review the performance of two companies within the Non-Banking Finance sector (though with very different business models), National Enterprises Limited (NEL) and JMMB Group Limited (JMMBGL). While lower energy commodity prices have weighed on NEL’s earnings, JMMBGL continues to improve on higher net interest income margins, among other factors. We examine both stocks and identify some of the main factors affecting their performance.

Historically, NEL’s ammonia-producing joint venture, Tringen, has accounted for the majority of Share of Profits of Equity Accounted Investees. While ammonia exports (for Tringen 1 & 2) have been on an upward trend in 2015 and 2016, prices have retreated. In 2012, average annual ammonia prices stood at US$559.92 /Tonne, whereas prices hit US$235.13 /Tonne in 2016, some 58% lower. Should prices remain at the current low levels in the near-term, Tringen’s contribution to NEL’s Share of Profit of Equity Accounted Investees will remain constrained.

Another major contributor to the Share of Profit of Equity Accounted Investees is via NEL’s 37.8% ownership in NGC LNG, who in turn owns 10% in Liquefied Natural Gas exporter Atlantic LNG (Train 1), taking NEL’s interest to 3.78%. Production of LNG has been on a downward trend over the last 5 years. In 2012, LNG production amounted to 32.67 million cubic meters. In 2016, production levels slipped to 24.4 million cubic meters, a decline of 25%. This somewhat corresponds to natural gas production in T&T, where 2012 average daily production was 4,122 mmcf/d while 2016 average just 3,326 mmcf/d (19.3% lower)  Looking ahead, the new gas fields which are expected to come on stream in 2017 and 2018 should – in the short term – arrest the declining trend of production. Consequently, NGC LNG’s contribution to NEL may improve, pending any unforeseen movements in LNG prices. 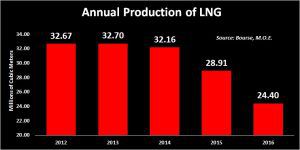 The third largest contributor to NEL’s share of profits has traditionally been its 20% interest in NGC NGL, which owns 51% of Phoenix Park Gas Processors Limited (PPGPL). PPGPL operates the country’s only natural gas processing and natural gas liquids (NGLs) fractionation plant and is the largest producer of propane, butane and natural gasoline. Total export of natural NGLS from PPGPL declined 21% in 2016, compared to 2015. NGL prices however, have recovered from its lows in quarter 1 of 2016, and has been on an upward trend throughout the year. Like LNG production, NGL production stands to benefit from the new gas fields which are expected to be commissioned in the coming months.

Historically, NEL’s 33.33% holding in Panwest, which owns 10% of PPGPL, has contributed positively to the Share of Profit of Equity Accounted Investees. Additionally, NEL’s 1% shareholding in TTNGL (which owns 39% of PPGPL), account for a further 0.38% exposure to PPGPL, taking NEL’s total holdings in PPGPL to 13.9%. In recent times, several losses related to NEL’s 51% position in TSTT have weighed on NEL’s earnings. Should these trends continue in the near term, earnings is likely to remain subdued.

At a current price of $10.94, NEL trades at a trailing P/E of 182.3 times, considerably above the sector average of 10.9 times (excluding NEL). Additionally, NEL offers investors a trailing dividend yield of 2.74%. On the basis of expected higher LNG and NGL production expectations, but tempered by the negative impact of lower ammonia prices, Bourse maintains a NEUTRAL rating on NEL.

Net interest income increased by 20% or TT$44.63M to TT$268.24M, with net interest margin rising from 42.5% to 47.3%. This performance was due to improved interest income, while interest expenses were contained. Net interest income has increased on average by 19% since 2011. The loan and investment portfolios, which were up a combined TT$1.5 billion, would have benefitted from an improving interest rate spreads.

Securities trading increased 48.3% or TT$71.82M, while Fee and Commission income improved by 28% or TT$9.79M. Net foreign exchange trading rose to TT$49.25M from TT$41.74M and dividends increased from TT$1.58M to TT$0.87M. Furthermore, 83.4% of the company’s operating revenue was generated from net interest income (45.8%) and securities trading (37.6%) combined. The 48.3 % improvement in securities trading fees was reportedly attributable to opportunities arising from Brexit and Emerging markets, and a higher demand for Government of Jamaica bonds.

JMMBGL is currently trading at a trailing P/E of 11.5 times, significantly higher than its 6-year average of 7 times and is in line with the Non-Banking Finance sector average of 11 times . The stock offers investors a trailing dividend yield of 1.76% and currently has a market to book value of 1.5x. Year-to-date, the share price has rallied 33%, after an increase of 64% in 2016. Based on the valuations and share price appreciation, Bourse maintains a NEUTRAL rating on JMMBGL.