This week, we at Bourse review the financial results of Sagicor Financial Corporation Limited (SFC) and National Flour Mills Limited (NFM) for their financial years ended 31st December 2018. While SFC recorded commendable Revenue growth across all segments, overall profitability was impacted by certain one-off provisions related to the Government of Barbados debt restructuring. NFM, meanwhile, continues to challenges to growth. We take a closer look at the results and provide an outlook. 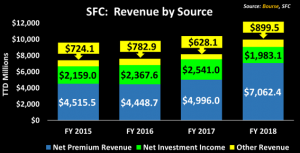 SFC’s Total Revenue has improved by more than 34% over the past three financial years. In 2018, the Group recorded a 41.4% surge in Net Premium Income, from TT$5.0B to TT$7.1B According to the Chairman, the improvement was primarily due to increased premiums from the USA segment, where the Group has opted to retain 100% of production instead of engaging in reinsurance. This was evident by a 42.8% cut in Reinsurance Premium Expense YoY, from TT$1.02B to TT$585.5M. A rise in Fee Income in the Group’s Jamaica through greater investment banking business also contributed to overall Revenue growth in FY 2018.  On the other hand, Net Investment Income, which grew consistently over the two prior periods, recorded a decline of 22.1%, from TT$2.54B in FY 2017 to TT$1.98B in FY 2018. With broadly positive global financial markets in Q1 2019, SFC’s Net Investment Income could benefit. 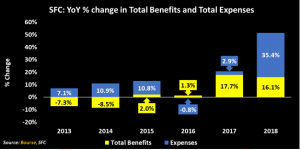 A question on the mind of many SFC shareholders is whether or not Canadian-based Alignvest Acquisition II Corporation’s (AQY) scheme of arrangement with SFC will go ahead. Investors following these developments would recall that AQY shareholders are now set to vote on the proposed acquisition in May 2019. If approved, it would pave the way for SFC’s delisting from exchanges in the Caribbean and UK, instead being listed on the Toronto Stock Exchange. A successful transaction could offer benefits to SFC shareholders – opting to exchange their old SFC shares for new Sagicor shares –  of improved trading liquidity and price discovery. From a financial perspective, a successful deal would give a green light for SFC’s acquisition of Scotiabank’s insurance operations in Trinidad and Tobago and Jamaica. Also on offer would be a wealth of international experience and support, as well as access to deeper and broader capital markets. 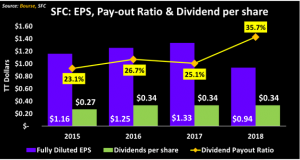 At a current price of $8.60, SFC trades at a trailing P/E of 9.2 times, below the Non-Banking Finance sector average of 11.6 times (excluding NEL). The market-to-book ratio is 0.65, also below the sector average of 1.4. SFC offers investors a trailing dividend yield of 3.9%, higher than the Non-Banking Finance sector average of 3.1% (excluding NEL). With attractive valuations (after adjusting for one-off items), SFC remains a reasonably compelling addition to an investment portfolio. Should the AQY offer for SFC be approved and concluded, SFC’s attractiveness would be further enhanced. On this basis, Bourse upgrades its rating on SFC to BUY. 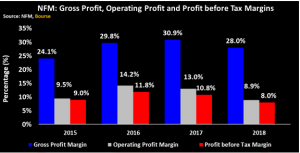 NFM’s Gross Profit Margin experienced a decline in FY 2018 from 30.9% to 28.0%, resulting from a $10.0M increase YoY in Cost of Sales which the Chairman attributed to narrowing of export margins. This was exacerbated by an 8% hike in grain prices and a total increase of $4.3M in wages and salaries for the year due to trade union pressure. Increases in transportation costs, wages and provision for bad debts collectively led to a $4.1M or 11.3% rise in Selling and Distribution Expenses. Therefore, Operating Profit Margin fell moderately from 13.0% to 8.9%. Of particular note was a $5.7M or 59.8% reduction in Net Finance Costs resulting from a $32M (26%) decline in Total Borrowings. Notwithstanding, Profit before Tax Margin, followed the trend of compression over the past periods, declining to 8.0% from 10.8% in FY 2017. Going forward NFM’s profitability will be dependent on its ability to foster sustainable revenue growth in both its domestic and international operations while containing costs to maintain or improve profit margins.

At a current price of $1.75, NFM is trading at a trailing P/E of 9.2 times, well below the Manufacturing I Sector P/E of 22.9 times (excluding GML & UCL). NFM has reduced its annual dividend payment (subject to approval) from $0.10 to $0.07. The stock now offers investors a trailing dividend yield of 4.0%, in line with the sector average yield of 4.0% (excluding GML & UCL). On the basis of relatively low valuations but tempered by downward trending profit margins and the continued adverse impacts of the slow economic environment on operations, Bourse maintains a NEUTRAL rating on NFM.