This week, we at Bourse review the financial performance of the two largest stocks by market capitalization listed on the Trinidad and Tobago Stock Exchange for the six months ended 31st March, 2019 – NCB Financial Group Limited (NCBFG) and Republic Financial Holdings Limited (RFHL). Both banks reported top line growth but fared differently with respect to overall profitability due to various one-off events. We discuss the performance of both companies and provide a brief outlook. 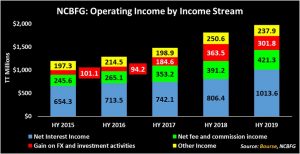 NCBFG’s Operating Income has shown an upward trend over the last four comparable periods, growing 65.0% from TT$1.20B in HY 2015 to TT$1.97B in HY 2019. For FY 2019 thus far, the Group experienced notable growth in Net Interest Income (+25.7% YoY) which has, on average accounted for over 51% of Total Operating Income since 2015. This was bolstered by an expansion in the loan portfolio as Total Loans and Advances (Net of Credit Impairment Losses) stood at TT$19.5B at the end of Q2 2019, up 14.7% from TT$17.0B as at the end of Q2 2018. According to the Group CEO’s statements, the ratio of Non-Performing Loans to Gross Loans increased from 4.4% to 4.5% over the past year. Net Fee and Commission Income also improved by a modest 7.7% YoY. In contrast, Gains on Foreign Exchange and Investment Activities – a more volatile income stream – declined from TT$363.5M to TT$301.8M due to a reduction in profits on the sale of debt securities. Other Income (including Premium and Dividend Income) collectively fell 5.1% YoY.

The Group reported YoY Operating Profit growth (prior to eliminations) in four out of seven segments. The Life Insurance and Pension Fund Management Segment contributed TT$197M (24.3%) to total Operating Profit, a significant 40.6% YoY improvement, effected by the release of reserves due to improving spread performance and changing mortality assumption. The Corporate Banking segment grew Operating profit by 71.4%– primarily from the consolidation of Clarien Group and loan portfolio expansion. The General Insurance segment also improved Operating Profit 155% from TT$8M in HY 2018 to TT$20M in HY 2019, due to lower claims. Conversely, Wealth, Asset Management and Investment Banking declined 18.3% YoY from $203M to $166M. Treasury and Correspondent Banking also fell marginally from $198M to $195M.

NCBFG’s PBT has retreated 6.8% compared to that of the previous year. PBT in HY 2019 fell to TT$788.9M, driven in part by the uptick in Operating Expenses including Staff Costs (up $95.6M), Credit Impairment Losses (up $74.3M) and Other Operating Expenses (up $88.7M). However, a significant $139.7M reduction in Policy Holders’ and Annuitants’ Benefit Reserves tempered the effect of this increase on overall PBT.  Additionally, in HY 2018, the Group would have had a significant non-recurrent gain of TT$222.7M related to Negative Goodwill on the Acquisition of Clarien Group Limited in 2017 which outweighed the non-recurrent gain experienced in HY 2019 of TT$166.9M from the disposal of its 26.3% shareholding in JMMB Group Limited.

On May 2nd 2019, NCBFG announced that all terms and conditions upon which the acquisition of GHL was contingent had been met or waived. A total of 118,517,936 GHL shares were deposited, exceeding the maximum number of shares to be accepted by NCBFG. As a result, the number of shares for which depositors will receive the consideration of US $2.79 per share will be determined on a pro-rata basis. The extended closing date for the offer remained on May 3rd, 2019 and settlement should be expected by May 13th 2019. Going forward, NCBFG expects to improve its regional foothold in the Insurance and Asset Management industries through the GHL acquisition, which could significantly improve core income.

At a current price of TT$8.45, NCBFG trades at a trailing P/E of 15.3 times, below the Banking sector average of 16.6 times but well above its 3-year average P/E of 10.5 times. NCBFG offers investors a trailing dividend yield of 1.9%, below the Banking sector trailing dividend yield of 4.0%. On the basis of continued Revenue growth and increased earning potential through pending acquisitions, but tempered by rising Operating Expenses, fair valuations and a relatively low dividend yield, Bourse maintains a NEUTRAL rating on NCBFG.

RFHL’s Operating Income has improved steadily over the past three years. In HY 2019, Total Operating Income exceeded the corresponding HY 2016 figure by 15.1%. Net Interest Income has grown at an average rate of 4.9% per year over the past three years. Other Income followed a similar trend, expanding by an average rate of 4.4% per year over the same comparison dates. As RFHL continues to vigorously pursue opportunities for expansion, it can be expected that core Income may climb at an even higher rate going forward. On March 13th 2019, the Group completed the acquisition of Cayman National Corporation (CNC) which contributed to the 22.0% or $15.1B growth in Total Assets.

The Group’s Profit Before Taxes (before eliminations) in HY 2019 was propelled by its Trinidad and Tobago operations which contributed $2.56B, 82.7% higher than the previous year. This was driven by adjustments to the terms of its Post-Retirement Medical Benefits plan which resulted in a one-off write-back of $438.4M before taxes. The Guyana segment also grew PBT contributions 60.0%, while contributions from Barbados fell 6.0%.

Following the consolidation of CNC, RFHL’s FY2019 result should reflect an increase in Earnings per Share of $0.50. Furthermore, RFHL continues to await the requisite approval for the acquisition of Scotiabank’s Banking Operations in Guyana, St. Maarten and the Eastern Caribbean. The consolidation of these operations is expected to improve their regional market share in the Banking Industry and lead to further growth.