This week, we at Bourse review the performance of two cross-listed stocks JMMB Group Limited (JMMBGL) for the six-month period ended September 2017 and NCB Financial Group Limited (NCBFG) for its financial year ended September 2017. Fortunes for these stocks were mixed, with JMMBGL reported lower earnings while NCBFG reported another year of earnings growth. We discuss the performance of both companies and provide an outlook.

JMMBGL reported Earnings per Share of TT$0.05 for the six-month ended September 30th 2017, a 16.9% decline over the prior year. This result was driven in large part by a sharp increase in operating expenses, despite some growth in revenues.

Net interest income grew 15.3% to TT$198.9M, while Fee and commission income increased 43.8% to $42.2M for the period under review.  Other sources of revenue, Gains on securities trading, Forex trading and Dividends fell 5.6%, 20.9% and 27.1% respectively. Operating revenue stood at $TT 429.9M, a 5.4% improvement over the prior period’s comparative results. This was primarily due to higher spreads and volume growth in the loan and investment portfolios. Operating expenses, however, increased 14.8% from TT$268.8M to TT$308.6M, leading to a fall in Operating profit to TT$121.3M, 12.9% lower than the prior period. Tax expense was 11.5% higher amounting to TT$36.0M for the six-month period 2017. Overall, Profit for the period attributable to equity holders of the parent, declined 17.3% to TT$88.5M. 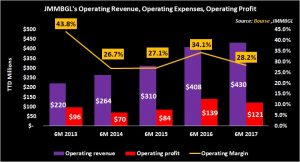 The Group is currently unrolling its expansion and development plans which include the launch of commercial banking in Jamaica (JMMB Bank) and pension fund management (JMMB AFP) in Dominican Republic. The price of growth, both in terms of technological advancement and physical presence in its target markets, would have been reflected by an increase in JMMGL’s operating expenses. In the short term, the Group’s growth initiatives may weigh on profitability. 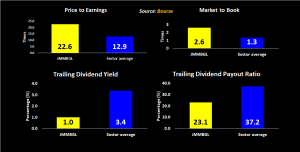 At a current price of TT$2.18, JMMBGL trades at a trailing P/E of 22.6 times, above the Non-Banking Finance sector average of 12.9 times (excluding NEL). The trailing dividend yield is 1.0%, below the sector average of 3.4% (excluding NEL). JMMBGL’s pursuit of new growth opportunities and the recent announcement of dividend payments in US dollars to Trinidad & Tobago shareholders is tempered considerably  its by subdued short-term financial performance, high valuations and a relatively low dividend yield on account of a sharp advance in the stock price. On this basis, Bourse revises its rating on JMMBGL from NEUTRAL to SELL.

NCBFG reported Earnings per Share (EPS) of TT$0.41 for the year ended September 30th 2017, a 32.3% increase from EPS of TT$0.31 reported a year earlier. A combination of organic growth and growth through acquisition (the purchase of a stake in Guardian Holdings Limited) would have contributed to the improved results.

Interest income grew 9.4% to TT$2.3B, while Interest expense increased 18.5% to $691.8M for the financial year 2017. The combined effect resulted in a 5.8% increase in Net interest income to TT$1.6B. NCBFG experienced revenue growth in all segments for the period under review. The two other major contributors, Net fee and Commission income and Gains on FX and Investment Activities, increased 26.9% and 63.1% respectively. Operating income stood at TT$3.1B, a 15.3% improvement over 2016’s results. Operating expenses increased (14.5%) to TT$2.0B, stemming from investments in operational initiatives and increased staff costs. Operating profit closed 16.9% higher at TT$1.1B. Share of profit of associates increased 242.4% mainly due to the Group’s recent acquisition of  29.99% holdings in  Guardian Holdings Limited’s (GHL), which itself delivered an   improved performance. As a result, Net Profit grew 32.3% from TT$764.3M in financial year 2016 to TT$1.0B in financial year 2017.

Over the past five years, NCBFG’s Operating income has grown 56.7%, with Operating profit increasing 107.6%. The advance in Operating income in 2017 was primarily due to growth in two income streams, Gains on FX and Investment Activities and Net fee & commission income. Expenses have increased approximately 6.0% every year since 2013.2017 Expenses were impacted by increases in salary, wages, allowances & benefits causing a 12.6% jump. Operating profit margin has been improving since 2013, increasing from 26.8% to 35.6% in 2017. 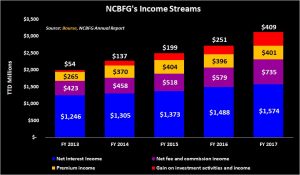 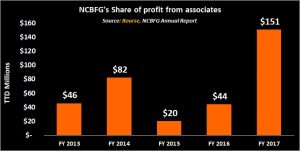 NCBFG’s Share of profit of associates have also grown significantly (230.1%) over the past five years, on account of improved performance by its associates and new acquisitions. Profit contributions from Guardian Holdings Limited spurred a 242.0% increase in Share of profit from associates in the financial year 2017. Share of Profit of Associates would have accounted for TT$106.8M of the overall TT$268.8M increase in Profit before Tax, 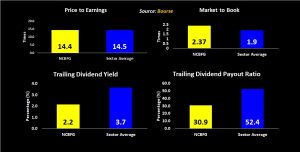 At a current price of $5.90, NCBFG offers investors a trailing dividend yield of 2.2%. Furthermore, the stock trades at a trailing P/E of 14.4 times (down from the 10.5% in 2014 and more than double its valuation of two years ago despite earnings growth) in line with the Banking Sector average P/E of 14.5 times. On the basis of improving corporate performance, but tempered by an aggressive increase in share price and reduced dividend yield, Bourse maintains a NEUTRAL rating on NCBFG.