This week, we at Bourse begin an analysis of several economic trends and consider what investors and the wider public might expect in the upcoming National Budget carded for October 7th, 2019. In the first of a series of articles, we consider the revenue side of the budget equation. Will economic growth remain muted, or will it accelerate? Will energy revenues be higher or lower than projected and how might this impact fiscal decisions for FY 2019/2020? We discuss below.

GDP Growth on the rebound 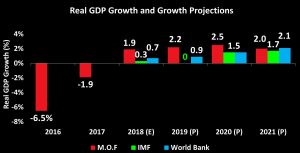 According to the Ministry of Finance, real GDP Growth recovered in 2018, measuring 1.9% year-on-year (YoY) in contrast to the contractions of 6.5% and 1.9% recorded in 2016 and 2017 respectively. Based on the most recent estimates of the World Bank (WB) and the International Monetary Fund (IMF), growth is expected to be relatively muted in 2019, but consistently improve by 2021 (WB: ↑2.1%, IMF: ↑1.7%). The expansion is expected to be supported by projected increases in exploration and production activity in the oil and gas industry. 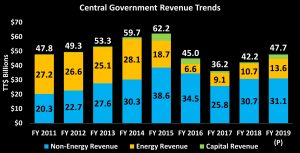 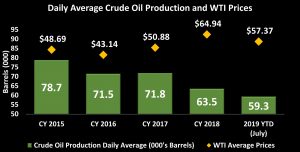 Daily Average Crude Oil Production levels have been consistently declining over the past four years, falling from roughly 78,700 barrels per day (bopd) in 2015 to a 2019 year to date average of 59,300 bopd. On the other hand, WTI prices over the same period have been recovering, recording a high of US$64.94 per barrel at the end of 2018, the same period for which Daily Production Average was lowest. 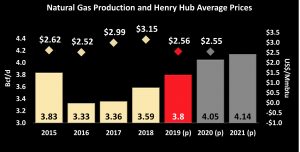 Production of Natural Gas has trended upward since 2016 and is forecast to continue on this trajectory into 2021, owing to increased exploration activity and development of existing wells by upstream companies. According to the Honourable Minister of Finance in the 2018/2019 Budget Statements, natural gas production is estimated to be 3.8B cubic feet per day (bcf/d) in 2019, and rise to 4.14 bcf/d in 2021. Henry Hub Natural Gas prices have declined 10.4% year-to-date (YTD) and the U.S. Energy Information Administration, in its latest short-term energy outlook, projects an average price of US$2.56/MMBTU for 2019 which remains relatively flat into 2020 at US$2.55/MMBTU. 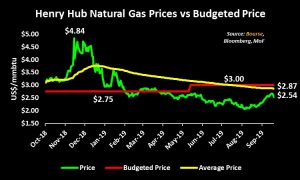 The 2018/19 Budget was predicated on a Natural Gas price of US$2.75/MMBTU. This was subsequently raised to US$3.00/MMBTU in the mid-year budget review on the basis that the average fiscal YTD Henry Hub prices were well above budgeted. However, the downward trend of natural gas prices has persisted over the course of the fiscal year, with the average fiscal YTD price falling below budgeted for the first time in mid-August. As at September 20th 2019, the spot price stood at US$2.54/MMBTU bringing the average YTD price to US$2.87/MMBTU. 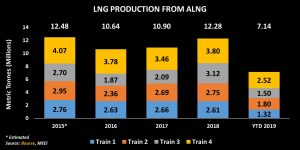 Following a significant 43.1% decline from US$413.1 per tonne in 2015 to US$235.1 in 2016, the average price of Ammonia has remained relatively stable, trading within a range of US$229.50-US$268.30. The average YTD Ammonia price sits at US$229.50, its lowest price since 2015. Ammonia Production and Export levels over the past four years have remained relatively flat with no significant deviations from its four year averages of 4.93 million metric tonnes and 4.50 million metric tonnes respectively.

Amidst generally weaker conditions in energy markets, it remains to be seen whether energy revenues will in fact meet projections or fall short. With non-energy sector revenues typically being more stable, revenue shortfalls (in the absence of adjustments to expenditure) will likely have to be made up through some combination of borrowing, drawdowns on savings and/or sales of assets.

Next week, we discuss the expenditure side of the budget equation.