This week, we at Bourse continue our analysis of economic data in the lead up to the National Budget for the fiscal year 2019/2020. With some uncertainty as to whether revenues for FY2019/2020 will meet projections given the weaker tone of international energy markets, we turn our attention to the expenditure side of the budget equation. We also take a look at the current position of government borrowings and national savings, the facilities which have historically been drawn upon to fund the fiscal deficit. 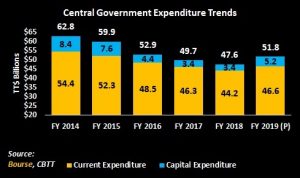 Actual expenditure would have strayed moderately from projections, according to the Honourable Minister of Finance in the mid-year budget review. For the fiscal half-year (Oct 2018- Mar 2019), government recurrent expenditure fell $2.55B shy of estimates at $23.63B driven by reductions in expenditure on goods and services and interest payments as a result of “tight cash flows”. However, the total expenditure projection for FY 2018/2019 was adjusted upward by $300M to $52.2B which, if realized, represents a 9.7% increase YoY. The revision was based on plans for increased infrastructural activity and the discharging of arrears to commercial suppliers and contractors as well as liquidating VAT refunds. 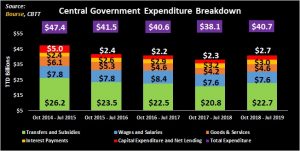 Transfers and Subsidies amounted to $22.7B (up 9.0% YoY) during the fiscal 10-month period (October 2018 – July 2019) and continue to represent the lion’s share of government expenditure, accounting for an average of 55.6% of total expenditure over the last five comparable periods.  Expenditure on Goods and Services also increased by 11.5% YoY, while allocations to Wages and Salaries remained relatively flat at $7.6B (averaging 18.9% of Total Expenditure) and Interest payments fell from $3.2B to $3.0B. The allocation to Capital Expenditure has increased from $2.3B to $2.7B and now accounts for 6.7% of Total Expenditure, down from a high of 10.5% ($5.0B) during the comparable period of FY 2014/2015.

The overall fiscal deficit, or the difference between revenues and expenditures, has narrowed from $8.0B and $13.5B in FY2016 and FY2017 respectively, to $5.4B in FY2018. Given the downward revision to government revenue from $47.7B to $47.5B and the upward revision to expenditure, the deficit is now expected to amount to $4.57B for FY2019. Financing of the deficit was projected to consist of $3.826B in domestic financing and $225.7M in foreign financing.

Net Official Reserves and Import Cover have been consistently declining over the past five years. Net Official Reserves have fallen from US$10.5B in 2015 to US$7.0B in 2019, a 33% reduction. On the other hand, Import Cover as at August 2019 stood at 7.9 months. Though this is well above the international standard of 3 months, it is well below the 12.1 month figure observed in 2015. Several factors would have accounted for this change, including lower Government Revenues from the Energy sector- a major foreign exchange contributor- as a result of lower levels of production and falling volatile energy prices. Relatively inelastic import demand, combined with the Central Bank’s efforts to maintain the TTD/USD exchange rate would have also placed a strong downward pressure on Net Official Reserves.

T&T’s Heritage and Stabilization Fund (HSF) remains a source of funding upon which the government can rely in instances where energy revenue falls more than 10% short of budgeted projections. Net contributions by the government since inception currently stand at US$3.3B. With a Net Asset Value of US$6.19B as at June 30th, 2019, the performance of the HSF has been predominantly driven by strong investment returns. The fund’s asset allocation consists of 38.9% equity and 61.1% fixed income investments.

Government Debt on the Rise 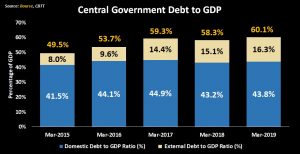 While mention has been made of the issuance of approximately $1B in housing bonds and a second offering of NIF-type bonds, none of these have yet come to market. Otherwise, it remains to be seen what additional measures will be put in place to fund the fiscal gap in light of the projected uptick in expenditure.

It would appear that some combination of drawdowns on savings, borrowing and/or asset sales may be necessary to fund the likely fiscal deficit for FY2018/2019, should revenue and expenditure trends persist.

While investors may ponder which specific assets may be up for sale or used as collateral (as was the case of the NIF bonds), the more likely short-term solution to raising funds will be via borrowing. Although debt-to-GDP levels have climbed, they remain within comfortable international norms and below the 65% guidance level mentioned by the Honourable Prime Minister in past communications.

In an environment in short supply of fixed income investment opportunities, investors will be looking out for opportunities to acquire relatively safe fixed income assets while aiding the sovereign in funding its expenditure initiatives.