This week, we at Bourse review both the local and select international fixed income market performance thus far for 2019. The local market remained subdued despite the promise of new offerings for investors, while the international bond investors have experienced positive returns for 2019. We take a closer look at the main drivers and the impact for the investors.

The Government of the Republic of Trinidad and Tobago (GORTT) Treasury Yield Curve remained fairly stable year-to-date (YTD), with short-term yields marginally higher while longer-term yields have trended down. The yield on 1-year GORTT bonds increased to 2.90% in August 2019 from 2.75% in December 2018. Conversely, the 30-year GORTT yield fell over the same period to 6.18% in August 2019 from 6.31% in December 2018. Investors continue to bemoan the lack of new public bond issues coming to market, while secondary trading activity has also been subdued.

The Honourable Minister of Finance, Colm Imbert, in his national Budget presentation in October 2018, made mention of a Government housing bond and a second National Investment Fund (NIF) bond to be brought to market in 2019. Minister Imbert gave additional details in the mid-year budget speech in May 2019 of the proposed TT$1 billion housing bond, stating that it would have a 4.5% coupon with a 5-year tenor and come to the market in July-August 2019. To date, however, neither the ‘new NIF’ nor housing bond have been formally announced.

The Monetary Policy Committee (MPC) of the Central Bank of Trinidad and Tobago (CBTT) maintained the repo rate at 5.00% in June 2019, despite persistent Commercial Bank Excess Reserves and record low inflation in the Trinidad and Tobago economy. Commercial Bank Excess Reserves with the CBTT amounted to TT$3.7 billion in July 2019, while year-on-year (Y-O-Y) inflation remained low at 1.1% in July 2019. With the next monetary policy announcement due later this month, will the CBTT follow recent actions by the US Federal Reserve (Fed) and other international Central Banks to cut interest rates? If not, what would be the reasons to maintain rates? 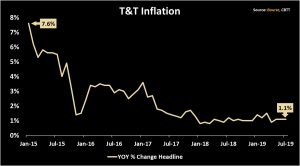 The U.S. Federal Open Market Committee (FOMC) cut U.S. interest rates by 25 basis points (0.25%) on July 31st, 2019, citing global developments and muted inflation as the rationale for the cut. Since then, Central Banks around the world including Brazil, India, Mexico, Russia and the European Central Bank (ECB) have followed with their own rate cuts. The International Monetary Fund (IMF) cut the global growth forecast to 3.2% in July, its second revision in 2019. The FOMC is widely anticipated to cut interest rates again at its next meeting on September 18th, 2019. 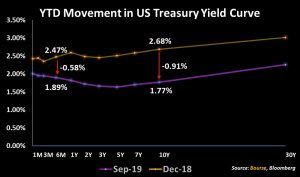 An inverted US Treasury yield curve is often viewed as an indicator of a looming recession, with some market participants believing it may hit as soon 2020. However, the U.S. economy has preserved economic growth thus far, supported by consumer spending and historically low unemployment

With expectations of interest rate cuts and an ongoing tit-for-tat trade war between the U.S. and China, investors have flocked to bond markets seeking more stable returns. This increased demand has led to one of the more pronounced credit rallies in recent memory, with the Emerging Market (EM) Investment Grade (IG) and High Yield (HY) US denominated bonds registering a total return of 12.5% and 6.9% respectively YTD. 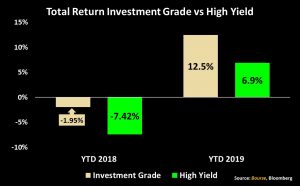 Despite a downgrade by S&P in mid-2019 and generally lacklustre economic performance, T&T’s US dollar denominated EM bonds have been buoyed by strong global bond market demand.

Locally, there remains some uncertainty as to the direction TT-dollar interest rates will take. Nevertheless, investors should seize any bond opportunities which become available in a market in short supply, particularly if offered by a high credit quality TTD bond issuer such as the Government of Trinidad & Tobago.

Against a backdrop of slowing global growth and trade tensions, it would appear that a lower US dollar interest rate environment is here to stay for the foreseeable future. With the probability of global recession increasing, investors might place more emphasis on credit quality and choose short-to-medium bond tenors (3-8 years) when investing.