This week, we at Bourse recap the performance of local and international equity markets for the first 9 months of 2019. Despite signs of decelerating global growth, escalating trade tension between the US and China and major market events, international stocks continue to rally. At home, market performance has been significantly supported by cross-listed stocks. Will these trends continue into the final stages of 2019? We consider below.

Within Q3 2019, JMMBGL received shareholder approval for the issuance of 325M additional shares (or 19.93% of its current outstanding shares) which, pending regulatory approval, will be offered to the public.

Republic Financial Holdings Limited’s (RFHL) pursuit of the banking operations of ScotiaBank in nine Caribbean jurisdictions has hit some stumbling blocks. While approval for six jurisdictions has been received, RFHL has been met with resistance from some jurisdictions, particularly Guyana, Antigua and Barbuda and St. Maarten. The acquisition of Sagicor Financial Corporation Limited (SFC) by Canadian-based Alignvest Acquisition II Corporation (AQY) is expected to be completed in Q4 2019, leading to SFC’s delisting from the TTSE, BSE and LSE and listing of ‘New Sagicor’ on the Toronto Stock Exchange.

The S&P 500 has been on an upward trend, advancing 18.7% as at the end of Q3 2019. The performance of US markets has been largely linked to improved investor sentiment caused by the shift of the US Federal Reserve to an accommodative, more dovish stance on monetary policy. Ongoing trade and geopolitical tensions between the US and countries such as China and Iran have seemingly not worried investors except for a few fleeting moments in the year. 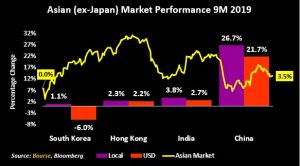 Asian (excluding Japan) markets ended September up 3.5%, after advancing as much as 15.0% in April. China’s market, as measured by the CSI 300 Index, maintains healthy returns of 21.7% despite ongoing trade rumblings between itself and the US. Fiscal stimulus in the form of corporate tax rate cuts and infrastructural investment by the Chinese government in areas such as transportation and energy would have mitigated declines in trade activity. China’s monetary stimulus took the form of a series of reductions of banks’ reserve requirement ratios, freeing up approximately US$126B which can be used to increase lending to small and medium enterprises. Elsewhere, ongoing trade tensions between South Korea and Japan, disruptive protests and political unrest in Hong Kong, and slower private consumption and investment activity in India would have erased much of the gains accrued earlier in the year for the respective markets. South Korea’s Kospi, Hong Kong’s Hang Seng and India’s BSE 100 recorded returns of -6.0%, 2.2% and 2.7% in USD terms respectively. 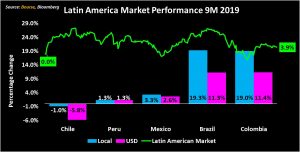 Latin American markets also receded after a more positive start to 2019, up 3.9% at the end of September. In contrast to the overall region, Brazil’s equity markets have fared well, advancing 11.4% YTD in USD terms. The performance was attributable to progress being made toward the approval of a pension reform proposal, positive trade deal developments mainly with the European Union, and interest rate cuts to boost stagnating growth and slowing inflation.

Despite resolving migration issues following the US tariff threats earlier in the year, the Mexican economy continues to struggle. Most recent metrics released in August showed the economy contracted 0.8% in the second quarter of the year mainly due to decreased industrial activity. As such the return on Mexican equities remained relatively muted with a YTD return of just 2.6% in USD terms. 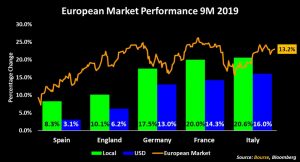 European equities advanced with the EURO STOXX 50 Index up 13.2% to close September. German, French and Italian equity markets have posted strong advances, up 13.0%, 14.3% and 16.0% respectively in USD terms. The European Central bank held its main refinancing rate steady at 0.00%. However, the deposit rate was lowered from -0.4% to -0.5% in September in attempt to combat slowing inflation and boost economic growth in light of trade tensions and BREXIT uncertainty. British parliament passed a law essentially forcing Prime Minister Boris Johnson to delay BREXIT if a deal has not been reached. The Prime Minister has said he will obey the law but also affirmed that Britain will leave the EU on October 31st.

With markets advancing despite mounting uncertainty, investors should consider strategies to minimize risk.

As always, consult with a trusted and experienced investment services provider, such as Bourse, to help you make more informed financial decisions.