This week, we at Bourse review the first quarter results for the period ending December 2016 of Massy Holdings Limited (MASSY) and First Citizens Bank Limited (FIRST). We take a closer look at the drivers of each company’s performance and provide an outlook on various factors which are likely to contribute to performance in the near term.

MASSY reported Earnings per Share (EPS) of $1.42, an improvement of 2.9% when compared to the EPS of $1.38 earned in the prior year. MASSY’s revenue remained relatively flat, moving from $3,095.5M to $3,089M. Despite the falloff in revenue, operating profit marginally improved by $1.5M (0.7%). After experiencing losses from the impairment of its ownership in a Costa Rican I.T. company, Share of results of associates increased by $12.8M (429%). As a result, Profit before Tax moved up by 6.8% ($14.3M). MASSY’s main segment, Integrated Retail, delivered a 10.9% increase in Profit before Tax over the comparable periods. Additionally, its Financial Services and Energy segments also improved by 12.8% and 10.9% respectively. The Automotive segment stabilized, whilst the ITC segment negatively impacted earnings. This was due to its IPTV business, which is still in its start-up stage. Overall, profit for the period improved from $146.3M to $151.2M, up $4.9M (3.4%).

Outlook
While the Trinidad and Tobago market accounts for the majority of the MASSY’s revenue by geography, exposure to the domestic market has been on a downward trend (55% in 2012 compared to 48.4% in 2016). This is consistent with MASSY’s objective to continue diversification by expanding throughout the region. MASSY’s announcement of its acquisition of another car dealership in Colombia, taking its total exposure to the Latin American country to 5% (compared to 0% in 2012), is another step in direction of currency and geographic diversification. The  exposure to the Trinidad and Tobago economy could pose some challenges to corporate performance particularly with respect to  higher corporate taxation of 30% (previously 25%), which will likely impact earnings  from Q2 2017 going forward . 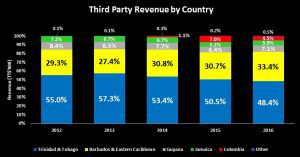 At a current price of $52.00, MASSY trades at a reported trailing P/E of 10.1 times, which is lower than the only other locally competing conglomerate, AMCL, which trades at 14.8 times. Adjusting for one-off costs in the last fiscal year, MASSY’s P/E would be in the range of 8.9 times. The firm pays a trailing dividend yield of 4%, above the Conglomerate sector average of 2.7%. On the basis of performance stabilisation and relatively attractive valuations, but tempered by ongoing challenging economic conditions on its main market, Bourse maintains a NEUTRAL rating on MASSY.

Outlook
FIRST will continue to experience some headwinds, given the slowdown in economic activity in its main market, Trinidad and Tobago. Loan growth remains tepid at 2.67% year-on-year. Over the past 5 years, FIRST has encountered mixed performances in growing its loans to customers, which may be a continuing trend in a muted economic environment. The upward trend in loan impairment is expected to continue, should loan quality decline as recessionary conditions persist. Corporate taxation increases, as with most other companies, will likely impact after-tax profits.

Since listing on the TTSE, FIRST has traded at an average price of $35.50, reflecting its earnings stability and measured growth. Year-to-date, however, the share price has declined 7.1%. This could be attributable to investors’ expectations of the second public offering of FIRST shares within the next few months. Based on the announcement by the Minister of Finance in the 2016/2017 budget, it is estimated that the secondary issue will be at a price of around $30.00.  The estimated offer price, if realized, would represent a trailing P/E of 11.8 times, significantly lower than the banking sector average of 14.3 times and more compelling value than purchasing at the current market level. Bourse maintains a NEUTRAL rating on FIRST.