This week, we at Bourse review the performance of two cross-listed stocks, NCB Financial Group Limited (NCBFG) and JMMB Group Limited (JMMBGL) for the period ended 31st December 2018. The companies would have parted ways in recent times, with NCBFG selling its 26.3% stake previously held in JMMBGL. While higher taxation weighed on the performance of NCBFG, JMMBGL reported improved earnings driven mainly by top line growth. 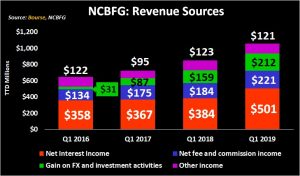 Over the past four years, NCBFG has grown its core Revenue sources (Net Interest Income, Gain on Foreign Currency and Investment Activities and Net Fee and commission income), with the exception of Other Income, which remains volatile. In the first quarter of 2019, the consolidation of Bermuda-based Clarien Bank supported growth in Net Interest Income. Meanwhile, Gain on Foreign Currency and Investment Activities improved 33.9%, attributable to higher exchange income stemming from a 5% appreciation of the Jamaican currency against the US dollar. Increased credit related and e-commerce fees from Clarien Bank also supported a 20.2% increase in Net Fee and Commission income. 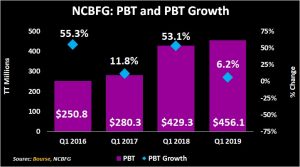 NCBFGs Profit before Tax (PBT) continues to grow, driven both by organic growth and acquisitions. The Group announced a revised proposal for the acquisition of up to a total of 62.0% of Guardian Holdings Limited (GHL). The new proposal offers investors an enhanced price of US$2.79. Since the announcement, the closing date of the offer was extended three times with the most recent date carded for April 30th, 2019. If the offer is successful, NCBFG has indicated that the consolidation of GHL could increase the group’s revenue to over US$1.5B or JD$200.0B. Additionally, the Group can benefit from synergies derived from consolidation.

At a current price of TT$8.39, NCBFG trades at a trailing P/E of 14.6 times, in line the Banking sector average of 14.1 times but well above its 3-year average P/E of 9.9 times. NCBFG offers investors a trailing dividend yield of 1.8%, below the Banking sector trailing dividend yield of 3.9%. On the basis of higher potential earnings through acquisitions, but tempered by continued increases in Operating Expenses, fair valuations and a relatively low dividend yield, Bourse maintains a NEUTRAL rating on NCBFG.

The Group experienced consistent improvements in performance across all revenue segments with the exception of Gains on Securities Trading. Significant expansion in the loan book and investment portfolios, up 12% and 6% for the 9M period respectively, were the main drivers of growth in Net Interest Income, which contributed $339.8M to Operating Revenue. Fee and Commission Income rose by more than 40% YoY, from $66.9M to $93.8M, on the back of higher revenue from managed funds and collective investment schemes. Foreign Exchange Margins from Cambio Trading experienced a substantial $51.3M gain, more than double that of the previous year, due to higher volume trading activity and growth in the regional markets. However, this was offset by an equivalent reduction in Net Gains on Securities Trading of $53.6M, a 24% decline YoY, attributed to negative investor sentiment for emerging markets. 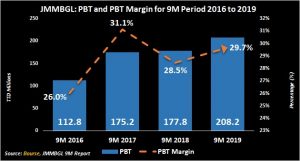 Notwithstanding the improvement in Profit for the Period, the Group reported a $169.1M decline in Shareholder’s Equity for the 9M period, reflective of the implementation of IFRS 9 and a drop in emerging market bond prices. Since the launch of the JMMB Express Finance (T&T) Limited in September 2018, growth has been recorded in the loan portfolio driving an expansion of the Group’s operations to two additional branches. This, coupled with a growing Dominican Republic portfolio, is anticipated to positively influence the Group’s profitability going forward.

At a current price of TT$1.78, JMMBGL trades at a trailing P/E of 14.3 times, above the Non-Banking Finance sector average of 12.5 times (excluding NEL). The trailing dividend yield is 1.37%, lower than the sector average of 2.9%. On the basis of a positive earnings trend, but tempered by relatively high valuations and low dividend yield, Bourse maintains a NEUTRAL rating on JMMBGL.