This week, we at Bourse review the performance of West Indian Tobacco Company Limited (WCO) and Prestige Holdings Limited (PHL) for their financial years ended 2018. On a positive note, both companies experienced top line growth, despite a weak economic environment. PHL felt the impact of foreign exchange shortages on overall profitability, while WCO recovered in the face of a more competitive market. We take a closer look at the results and provide an outlook.

The West Indian Tobacco Company Limited (WCO) reported Earnings per Share (EPS) of $4.81 for the year ended 31st December 2018, a 6.5% increase compared to the $4.51 EPS reported a year earlier. 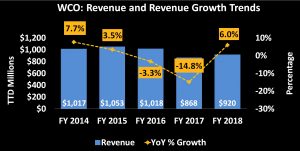 WCO recorded 6% improvement in top line growth in FY 2018 amidst competitive pressures in the domestic market from cheaper, potentially illicit products which drove Revenue down in 2016 and 2017. In response to this, as well as an overall reduction in consumers’ purchasing power and disposable income (brought on by a harsh local economic climate), the Group strategically repositioned some of their brands, to boost sales of its lower-end branded products. 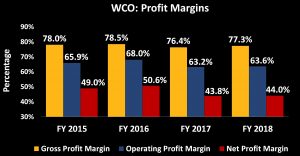 WCO has been able to maintain its operating efficiency and profitability over time. Despite a $3.5M increase in Cost of Sales, Gross Profit Margin increased to 77.3% in 2018. Distribution Costs and Administrative Expenses rose $9.7M (76.7%) and $12.5M (18.5%) respectively. However, this was offset by a $10.4M or 30.4% reduction in Other Operating Expenses. Overall, Operating and Net Profit Margins improved marginally (to 63.6% and 44.0% respectively) YoY after a fall in 2017.

While not impacting financial performance, the pending 3 for 1 stock split could have some influence on the performance of WCO’s stock once effected.

At a current price of $96.02, WCO trades at a trailing P/E of 20.04 times, relatively in line with the Manufacturing I sector average of 19.1 times (excluding GML and UCL) and just below its five-year average of 20.8 times. WCO offers investors a trailing dividend yield of 4.8%, just above the sector average of 4.5% (excluding GML and UCL). On the basis of a rebound in profitability and attractive dividend yield, but tempered by relatively fair valuations and a still weak economic environment, Bourse maintains a NEUTRAL rating on WCO.

Despite minimal improvement in PHL’s Revenue in 2018, Gross Profit declined as the Group cited difficulties in procuring the foreign exchange necessary to adequately meet obligations. The associated high conversion rates from having to purchase alternative currencies was the major cause of the recorded increased costs. According to the Chairman, “that cost in 2018 alone was approximately $6M”. PHL also suffered from the weak economic conditions, as well as a decline in demand following price adjustments to offset the rising Cost of Sales. PBT Margins have fallen from 8.33% in 2015 to 3.71% at the close of FY 2018. 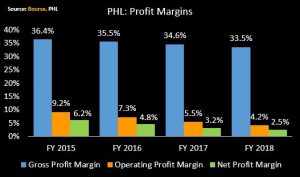 PHL’s Profit Margins have declined consistently over the period 2015 to 2018. Gross Profit Margin contracted to 33.5% in FY 2018 from 34.6% the previous year. Operating Profit and Net Profit Margins dropped to 4.2% and 2.5% respectively. In FY 2018, the Group brought three new restaurants into operation and renovated three KFC branches across Trinidad. PHL plans to continue its organic growth initiatives in 2019 with the anticipated operationalization of five new restaurants in 2019. Cost management will be critical to improving the fortunes of PHL, as seen by the impact on profitability by higher cost of sales. Should the foreign exchange situation not improve for PHL, profitability is likely to face continued headwinds. 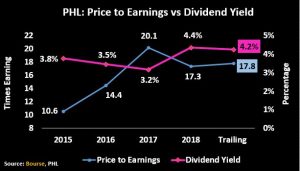 At a current price of $7.54, PHL trades at a trailing P/E multiple of 17.8 times, above the Trading sector average of 11.0 times and its four-year average of 15.6 times. The stock offers investors total dividends of $0.32 per share in FY 2018, lower than the $0.34 per share in FY 2017. The trailing dividend yield is 4.3% (above the sector average of 3.6%), with trailing payout ratio of 75.5%. On the basis of PHL’s continued expansion and current attractive dividend yield, but impeded by rising operational costs, margin compression and relatively high valuations, Bourse maintains a NEUTRAL rating on PHL.