This week, we at Bourse take a closer look at the highlights of the 2017 Mid-year Budget Review as presented by the Honourable Minister of Finance on May 10th 2017, placing particular emphasis on opportunities and implications to investors.

Mid-Year Fiscal Position at a Glance

The Minister of Finance indicated that Government revenue for FY2017 was revised upward to TT$48.0B, from the previous TT$47.4B, largely due to an expected increase of $575M stemming from income taxes from petroleum companies. He noted that there was a shortfall on projected VAT collections in the first half of the year amounting to TT$669M. This was partially offset by income tax collections of $743M, which was 11% higher than projected. The higher income tax collections stemmed from the ‘millionaire tax’, as well as the Supplementary Petroleum Tax (SPT), which petroleum companies are required to pay once the WTI oil price crosses US$ 50/BBL. Should  oil prices average below US$ 50/BBL for the second half of the fiscal year  (current average is US$ 47.82/BBL), it is unlikely that the positive variance attributable to SPT would recur.

The fiscal deficit is now projected to be TT$5.9B for Fiscal 2016/2017, a marginal improvement from the original TT$6.0B. However, for the first half of the fiscal year, central government operations has resulted in an interim deficit of TT$5.4B, up from the projected TT$3.85B. The Honourable Minister advised that this was due to temporary shortfalls in capital revenues and lower than projected tax collections in certain areas.

The Honourable Minister noted a number of measures to fund the fiscal deficit. One measure of continued interest to investors is the divestment of state-owned assets, which may provide opportunities to the capital markets, at the right price(s).

The Honourable Minister indicated that the National Gas Company of Trinidad and Tobago Limited (NGC) would be selling 40,248,000 class B shares or 26% of its shareholding in Trinidad and Tobago Natural Gas Liquids (TTNGL), a holding company listed on the Trinidad and Tobago Stock Exchange, via an Additional Public Offering (APO). Based on the estimated proceeds from this sale of TT$800M, it is likely that the offer price could be close to the IPO price of $20.00. The Honourable Minister noted that the APO “would be launched shortly.” This was a change from the initial position in September 2016, where 78,948,000 shares with estimated proceeds of $1.5 billion was to be divested.

Another potential investor opportunity could arise from the announced 50% divestment of Trinidad Generation Unlimited (TGU) by Union Estate Electricity Generation Company Limited (UEEGCL). The Honourable Minister indicated that it is the Government’s intention to sell up to 40% of TGU through the introduction of an Independent Power Producer (IPP) or other qualified private sector investors. It was stated that the remaining 10% would be offered to the public and/or institutional investors. Total proceeds from the divestment is expected to range between TT$3B to TT$5B. If listed, TGU would be the first utilities listing on the Trinidad & Tobago Stock Exchange (TTSE). Internationally, utilities stocks are traditionally favoured by investors for their stable, above-market dividend yield characteristics.

The Honourable Minister stated that as at September 2016, the Government spent approximately $20.3B in relation to the bailout of Clico Financial Group (CLF Group). By April 2017, the Government had incurred a further $3.2B in funding costs, while noting a further $4.3B in liabilities could arise. The Government could, therefore, be owed up to $27.7B by the CLF Group. 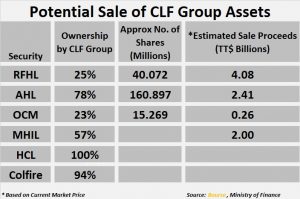 With respect to a repayment plan, the Honourable Minister stated that the Government is focusing on the recovery of taxpayers’ funds. In this regard, the Minister outlined several assets owned by the CLF Group which “are available to settle the Government’s debt”. These include Republic Financial Holdings Limited (RFHL), Angostura Holdings Limited (AHL) and One Caribbean Media Limited (OCM), all of which are listed on the Trinidad and Tobago Stock Exchange. These listed stocks could potentially generate up to $6.75 billion at current market prices. It should be noted, however, that sale of such significant positions of stock in a relatively short space of time would likely have to be undertaken at a discount to the current market price. Other companies owned by the group include Methanol Holdings International Limited, Home Construction Limited and Colfire, among others. If these assets are to be sold by the Government on behalf of the CLF Group, it could present an opportunity for investors.

With respect to Petrotrin’s debt obligations, the Honourable Minister of Finance noted that the company has been meeting its debt repayments, as they arise, for its amortizing bond due 2022. However, for Petrotrin’s US$850 million bond due in 2019, he alluded to the fact that this lump sum payment would be “problematic” for the company. Discussions are underway to develop an economical solution without the explicit financial support of the government.  One such consideration, is a partial refinancing of the bond on the domestic market, followed by an international bond issue. We hold the view that this proposed structure to refinance Petrotrin’s debt may be widely accepted by local investors, once they are rewarded in a similar fashion to that of international investors.

In terms of pricing, you may recall from Bourse’s May 1st article – “The Impact of the T&T Downgrade” – that investors might require a spread/yield of 550 basis points over US Treasury bonds to invest in Petrotrin’s debt. This equates to a cost of borrowing somewhere in the region of 8% (+/- 1%) if Petrotrin were to issue another 10 year note.

In an investment starved environment with high levels of liquidity, coupled with low interest rates, investors continue to search for value in the market. The divestment of state-owned assets could present opportunities for investors, depending on the price(s) of such sales.