This week, we at Bourse review the latest financial results of Sagicor Financial Corporation Limited (SFC) and Massy Holdings Limited (MASSY). SFC’s market price has advanced 16.7% year-to-date, while MASSY has declined marginally by 1.0%. We highlight some key areas of the performances and provide a brief outlook on each stock.

SFC reported fully diluted Earnings per Share from continuing operations of TT$ 0.29 for the first quarter ended March 31st 2017, 13.2% higher when compared to the prior period in 2016.

SFC’s Total Revenue advanced by TT$ 122.8M (6.9%). This was met by an increase in Total Benefits and Expenses of TT$ 114.2M (7.2%). The Chairman noted that higher administration costs were incurred in relation to the expansion of cards and payments business in the Jamaica segment, coupled with some other non-recurring costs in Jamaica. Profit before Tax moved from TT$ 196.3M to TT$ 204.9M. The Group’s Profit before Tax margin remained relatively stable at 10.7%, when compared to the 11.0% achieved for the same period in 2016. The Group faced a lower effective tax rate of 23% for the period (compared to the previous 30%). Overall, Profit from Continuing Operations for the period moved from TT$ 138.0M to TT$ 158.4M, an improvement of 14.8%. 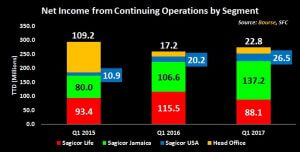 Massy Holdings Limited (MASSY) reported diluted Earnings per Share (EPS) of $2.59 for the six months period ended March 31st 2017, an improvement of 2.4% when compared to the EPS of $2.53 earned in the corresponding period in 2016. Total Revenue increased 1.5%, while Operating Profit declined by 2%. Operating Profit Margin declined from 6.9% to 6.7%. MASSY also generated $30.7M from Share of results of associates and joint ventures, as opposed to a net loss in this line item for the prior comparable period. Consequently, Profit before Tax rose to $430M, an increase of $32.3M. Taxation expense grew by $30.7M, due to an increase in effective tax rate from 32% to 36%. As a result, Profit after Tax grew marginally from $270.8M to $272.5M. 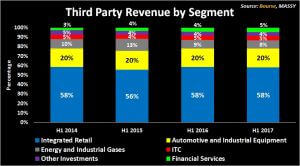 The Integrated Retail segment, MASSY’s largest business segment, has remained stable in recent years. This segment in most years has accounted for 45 percent of Profit before Tax and 58 percent of Third Party Revenue. Acquisitions in March 2017 of car dealerships in Colombia could improve the revenue generation in MASSY’s Automobile and Industrial Equipment segment, while also providing further geographical diversification. This could prove important to the Group’s performance, given that new car sales in the Trinidad and Tobago remain sluggish. New vehicle sales in T&T declined in the first quarter of this year by 25.5% compared to the same period in 2016. 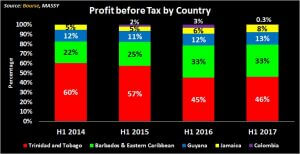 MASSY’s has operations in Colombia and various Caribbean countries. This forms part of MASSY’s diversification strategy.  In the Eastern Caribbean, Guyana and Jamaica there were double-digit increases in PBT however collectively these three regions accounted for 30% of total PBT (excluding from Head Office and Other adjustments). Operations in Trinidad and Tobago and Barbados accounted for 69% of total PBT in 2017. Growth in PBT in these territories were 8.33% and 0.68% respectively, well below the profitability levels MASSY generated in other markets. With both the T&T and Barbados territories expected to face some headwinds in the near-term, MASSY’s geographic diversification initiatives, among other efforts, may play a greater role in determining the Group’s financial performance.

At a current price of $51.48, MASSY trades at a trailing P/E of 10.05 times, below the Conglomerate sector average of 13.85 times. Its market to book ratio is 1.03x, which is below the sector average of 1.25x. MASSY declared an interim dividend of $0.52 per share payable on June 16th 2017, an increase of 2% compared to the same period in 2016. This brings MASSY’s trailing 12-month dividend yield is 4.10%, higher than the sector average of 2.79%. On the basis of relatively attractive valuations, but tempered by a more uncertain outlook in its main operating territories, Bourse maintains a NEUTRAL rating on MASSY.