Learnings From The FIRST APO

This week, we at Bourse take a closer look at results of the recently concluded First Citizens Bank Limited (FIRST) APO. We highlight possible reasons for the undersubscription of the APO and discuss what this could mean for subsequent APOs, in particular, TTNGL. 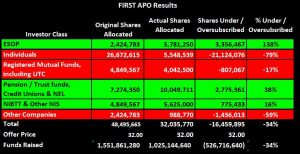 During the 2016/2017 budget, the Minister of Finance announced several measures to fund the Government’s fiscal gap. One such measure was the divestment of GORTT’s shareholding in First Citizens Bank Ltd (FIRST), via an Additional Public Offering (APO). In March 2017, GORTT offered 48,495,665 shares for sale at a price of $32.00 per share. The total expected funds to be raised from the offer was approximately $1.55 billion.

At the close of the offer, it was announced that 32,035,770 shares, or 66% of the issue, were subscribed. The APO was undersubscribed by 16.459 million shares, leaving a shortfall of approximately $526 million.

A closer look at the investor buckets/types and their respective appetite for shares would shed some light on actual investor interest. The Employee Share Ownership Plan (ESOP) was given top priority in the allocation for shares in the APO followed by Individuals, Registered Mutual Funds, Pension/Trust Funds and NEL, NIB, and Other Companies the in descending order. The ESOP category was able to access 3.3 million shares (138%) more than it would have originally been allocated (2.42 million). The Pension/Trust funds category, which included credit unions and NEL, and the NIB category were both able to access more shares than originally allocated (2.8 million and 0.8 million respectively). The individual category however, was undersubscribed by 21.1 million shares (79%).

In an excess liquidity environment with a relative lack of cash flow-generating assets, large institutions with considerable cash holdings may have chosen to participate in the APO to earn a relatively stable dividend yield since listing (currently 4.2%). From the individual, company and mutual fund perspective, however, the offer price would appear not to have presented much of a value proposition for participation in the APO, given that the market price was also $32.00 prior to the offer.

Another possible reason for the undersubscription of the APO in certain investor categories could be the relatively stable corporate earnings performance of FIRST in the last 4 years. While stable corporate earnings may have been viewed as attractive at the institutional level, it did not appear to appeal to the individual investor in terms of opportunity for near term capital gain. Profit after Tax for FIRST moved from $609M in 2013 to $637M in 2016, growing at a compound annual growth rate of 1.5%. In the current environment of lower economic activity, loan growth is expected to remain tepid, which could in turn weigh on the earnings of FIRST, being part of the Banking sector.

Finally, basic demand and supply relationships would have also suggested that, for a given significant increase in supply of any item, there should be a fall in value, other things held constant. Put differently, to incentivize the absorption of the considerable block of shares made available to the market (20% of the total shares outstanding), the seller might have had more success by providing a price incentive to would-be buyers.

As the dust settles on the FIRST APO, investors may quickly turn their attention to the next investment opportunity in the stock market, the pending TTNGL APO. The Minister of Finance indicated GORTT’s intention to sell its 51% shareholding in Trinidad and Tobago NGL Limited via an Additional Public Offering, similar to that of FIRST. GORTT’s 51% shareholding amounts to 78,948,000 shares (a combination of class A and B shares). The Minister had indicated that the sale was expected to raise $1.5B. If GORTT is to sell both class A (converted to B shares) and existing B shares to raise $1.5B, the APO price could be close to the IPO price of $20.00. 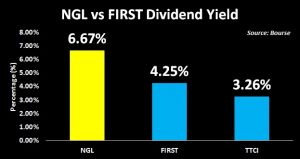 An offer price of $20.00 would result in a discount of 11% from the current listed price of $22.50. Notwithstanding the total quantum that may be offered to the market, the critical issue is what price will incentivise investors to purchase the shares in anticipation of near term capital gains and attractive dividend yield. We should mention that a comparison between FIRST and TTNGL must be put into context:

In determining the proposed offer price for the NGL APO, it may prove useful to consider the experience of the FIRST APO, as well as the current market conditions faced by TTNGL. Investors continue to search for value in the market, seemingly willing to be patient and wait on the side lines for suitably attractive investment opportunities.