The Impact of the T&T Downgrade

This week, we at Bourse take a closer look at the recent rating downgrades on both Trinidad and Tobago (T&T) and its domestic quasi-sovereign companies. We assess the impact of these downgrades on the sovereign and evaluate possible implications and opportunities presented to investors.

Within the space of one week, T&T together with its quasi-sovereign entities had their international credit ratings lowered by rating agencies Standard and Poor’s – S&P (April 21st 2017)  and Moody’s Investor services – Moody’s (April 24th 2017). This was also the case for its quasi-sovereign entities – the National Gas Company of Trinidad and Tobago (NGC) and Trinidad Generation Unlimited (TGU)

In the wake of an economic contraction and rising debt levels, S&P downgraded T&T’s rating from ‘A-’ (which represents a “strong capacity to meet financial commitments”) to ‘BBB+’ (defined as an “adequate capacity to meet financial obligations”). Following suit, NGC’s rating was subsequently lowered from ‘BBB+’ to ‘BBB’, TGU was downgraded from ‘BBB’ to ‘BBB-’ and Petrotrin’s rating was affirmed at ‘BB’. A stable outlook was assigned to all issuers.

The driving factors behind the downgrades included a contraction in the energy sector and its subsequent impact on the country’s Gross Domestic Product (GDP) and debt burden. The combination of a domestic decline in crude oil and natural gas production was coupled with a precipitous fall in energy prices. This caused T&T’s taxation Energy Revenues to fall by 78% from TT$17.8 billion over the period January-August 2014 to TT$ 3.8 billion over the same period in 2016.

A significant decline in GDP combined with additional borrowings resulted in a rise in the country’s debt ratios. Total Debt to GDP rose from 36.6% in fiscal 2011-2012 to 60.8% in fiscal 2015-2016. External Debt to GDP increased from 6.40% to 14.8% over the same period. Moody’s now expects the country’s debt ratio to climb to nearly 70% of GDP by 2019. The realization of Moody’s forecast would exceed the limit of 65% targeted by the Honourable Minister of Finance as noted in the 2017/2018 budget presentation.

Rising Borrowing Costs for the Country

The direct impact of a rating downgrade on T&T is a likely increase in its international cost of borrowing. As an issuer becomes riskier, investors demand a higher additional yield above risk free bonds (US Treasuries) to hold the issuer’s bonds. This has been observed in the case of T&T, as the extra yield demanded by investors to hold T&T US dollar denominated increased following the downgrades.

The sovereign’s last issue – T&T 4.5% bond due 2026 – was oversubscribed by 3.5 times.   Should the country’s debt metrics continue to weaken, sovereign issues may have to offer higher yields to attract investors. This translates into a higher cost of borrowing.

Though the recent downgrades are likely to have a limited impact on the Government’s local bond issues, there are both negative and positive impacts for investors holding T&T US dollar denominated bonds. 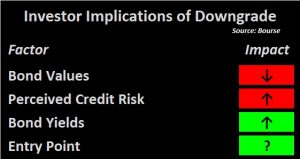 Investors holding T&T sovereign bonds are likely to face a downward adjustment in the values of their holdings, given the inverse relationship between bond prices and yields. That is, as bond yields increase, prices decrease, all other things being equal. However, we reiterate the benefits of adopting a hold-to-maturity approach.

Holding other factors constant, investors who adopt a hold-to-maturity approach will not be affected by volatility at a point in time in market prices. In other words, even though bond prices may go up or down, investors will continue to receive a fixed coupon and the face value at maturity. In contrast, investors who exit their positions prior to maturity will be subject to current market prices at the time of the sale. It should be noted, however, that investors holding to maturity should be reasonably confident that the bond issuer – in this case the GORTT – is able to make repayments of principal at maturity.

For investors who have been waiting for an opportunity to purchase T&T USD sovereign bonds, the rating downgrades may have a created an entry point. At this time, the resulting downward movement in bond prices has led to a rise in bond yields.