This week, we at Bourse review the financial performance of two commercial banks listed on the Trinidad and Tobago Stock Exchange (TTCI) for the first quarter ended 31st December 2018, First Citizens Bank Limited (FIRST) and Republic Financial Holdings Limited (RFHL). Both banks reported positive earnings growth, supported by different factors. We discuss the performance of both companies and provide a brief outlook. 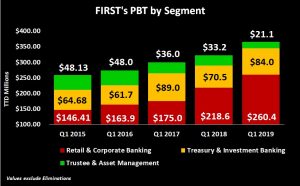 Consistent with performance over the past four years, FIRST has been able to improve Profit before Taxation in the Retail & Corporate Banking segment. Contributions from this business segment added an incremental $41.8M to the group’s PBT in the first quarter. According to the Chairman’s report, the group recorded a 10.3% or $1.7B uptick in consumer loans. Going forward, the increase in the group’s loan portfolio coupled with a higher prime lending rate – which increased from 9.25% to 9.50% in October 2018 (as per the Central Bank of Trinidad and Tobago data on FIRST prime lending rates) – should support interest income in 2019. PBT contributions from the Treasury & Investment Banking segment also improved 19.1%, following a fairly weak performance in the first quarter of 2018. The Trustee and Asset Management segment, however, experienced a 36.4% decline in PBT. While FIRST continues to record growth within its main operating segments, continued weak economic activity in the Trinidad and Tobago and Barbados market could weigh on the Group’s performance in the short term. 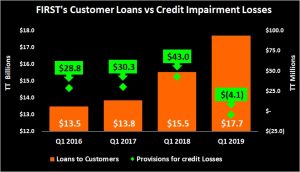 Over the three-year period (Q1 2016 to Q1 2018) the increase in Provisions for Credit Losses has remained relatively in line with growth in Loans to Customers. However, in Q1 2019, while Loans to customers rose 14.2%, the Group reported a credit reversal in Provisions for Credit Losses, which resulted in credit gain net of recoveries of $4.1M compared to a loss of $43.0M a year ago. Despite this one-off gain, provision for credit losses could continue to increase in weak economic conditions. Going forward, the Group’s profitability would depend on the ability to continue to drive growth in both the loan and investment portfolios. Of greater importance would the group’s ability to manage expenses.

Shareholders’ Equity remained relatively consistent at $6.8B. This reflected a 7.7% growth in Assets offset by a 9.2% jump in Total Liabilities. While Loans to Consumers drove Total Assets higher, Total Liabilities rose with a $1.4B increase in Debt Securities in issue. 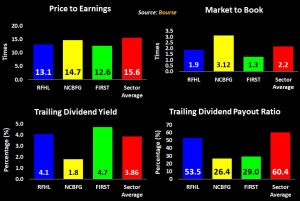 At a current price of $33.96, FIRST trades a trailing P/E of 12.5 times, below the Banking sector average of 15.6 times and its 3-year average of 13.5 times. FIRST offers investors a trailing dividend 4.7%, above the sector average of 3.9%. On the basis of relatively attractive valuations and dividend yield, but tempered by a subdued economic environment, Bourse maintains a NEUTRAL rating on FIRST.

Over the past four years (Dec 2015 to Dec 2018), RFHL has been able to consistently improve income across its revenue streams.  For the first quarter of 2019, Net Interest Income contributed an additional $63.0M or 7.6%, while Other Income contributed $33.0M or 8.4%. Going forward, the Group could continue to experience growth in Net Interest Income on the back of a higher lending rate of 9.75% compared to 9.50% a year ago (as per the Central Bank of Trinidad and Tobago data on RFHL’s prime lending rates). 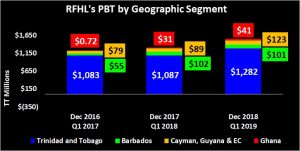 With the exception of the Barbados operations, RFHL has experienced consistent growth in Profit before Tax (PBT) contributions from all its operating locations over the past three years. In Q1 2019, the Trinidad and Tobago operations had the largest impact on PBT, contributing an additional $194.7M. The Group also benefitted from higher PBT contributions from its overseas operations, mainly driven by the performance of the Guyana segment, up 56.5%.

Looking ahead, the Group could continue to experience improved profitability, supported by the acquisition of Cayman National Bank, which (According to the Managing Director of RFHL) could add as much as $0.50 per share to EPS, if the transaction is successful. Additionally, the potential acquisition of nine of Scotiabank’s banking operations would likely strengthen the Group’s regional foothold and potentially bolster further growth in overseas operations. According to the Chairman’s Comments, “the CNC acquisition is at an advanced stage of the regulatory approval process and the process for the Scotiabank transaction has recently commenced”. 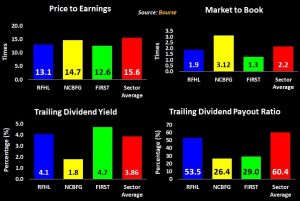