Bourse Weekly Review – Can more value be derived from NEL?

Can more value be derived from NEL?

This week, we at Bourse review the most recent financial results of National Enterprises Limited (NEL). NEL’s share price has slipped from $10.81 to $9.65 (down 10.7%) year-on-year, which may be reflective of investor expectations of the performance of NEL’s investee companies. We take a look at the NEL’s nine-month performance relative to the value contributed by its investee companies and provide a brief synopsis of the company’s value.

Going forward, NEL’s share of profits from NGC NGL and NGC LNG may be positively impacted by improvements in energy prices and production.

At a current price of $9.65, NEL trades at a trailing P/E of 53.6 times, higher than the Non-Banking Finance sector average of 11.9 times (excluding NEL). NEL offers investors a trailing dividend yield of 3.63%. On the basis of expected improvements in energy production, however dampened by declining contributions from non-energy investments, Bourse maintains a NEUTRAL rating on NEL.

Can more value be derived from NEL?

With relatively muted financial performance, investors may be pondering what, if any, measures could be implemented to derive more value from NEL. As a holding company, NEL is comprised of  several companies. Some of its key holdings are in the energy sector, including NGC NGL, NGC LNG, Tringen and PanWest Engineers and Constructors Limited. All of these investments would generate US dollar cashflows. On the other hand, TT dollar holdings include National Flour Mills Limited (NFM) – a stock already listed on the Trinidad and Tobago Stock Exchange – and TSTT. 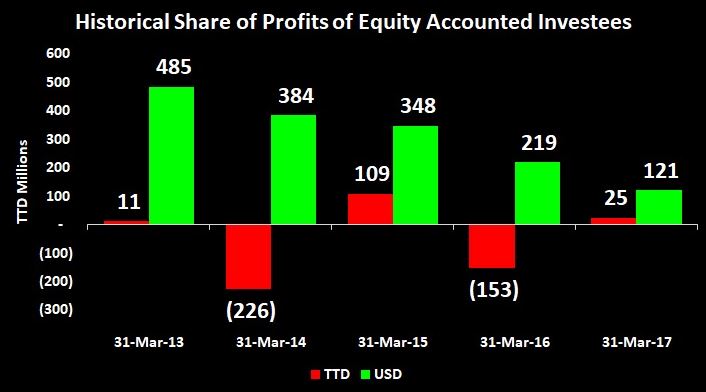 Over the last five years, the companies that generate USD flows have accounted for the majority of NEL’s Share of Profits of Equity Accounted Investees. In 2017 for example, USD flows comprised 83% of Share of Profits. Investors might very well welcome some reorganization of NEL, to the extent that USD-generating investments were carved out into a separate security (and possibly listed on the USD trading platform of the T&T Stock Exchange). At the same time, reorganization could provide shareholders with the option to either hold or sell the TT dollar component (comprising NFM, TSTT and other TT-dollar investments) of NEL’s portfolio. Ultimately, any reorganization initiative should have the effect of increasing shareholder value.