This week, we at Bourse review the most recent financial results of Trinidad Cement Limited (TCL) and MASSY Holdings Limited (MASSY). Despite higher revenues, MASSY posted a decline in corporate earnings. TCL recorded declines in both revenues and earnings. We look at their performance and provide a brief outlook. 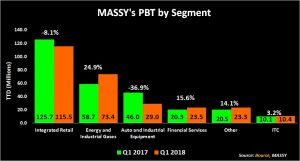 Lower economic activity in the Group’s main market continues to negatively impact PBT. This is reflected by an 8.1% decline in MASSY’s largest segment, Integrated Retail, which accounted for 42% of total PBT. Similarly, the Auto and Industrial Equipment segment fell 36.9% from $46.0M in quarter one 2017 to $29.0M in quarter one 2018. The impact on this segment is also highlighted when examining the trend in new car sales. According to data from the Central bank of Trinidad and Tobago, new car sales have been declining of the past four years, falling by 6.9% in 2017 following a 15.1% decline in 2016. 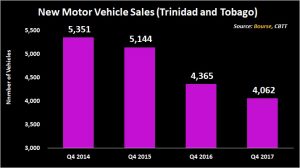 Conversely, the Energy and Industrial Gases segment posted an improvement in PBT of 29.4%. According to the Chairman, the Group saw improvements in the energy services companies in Trinidad and Tobago and Colombia. 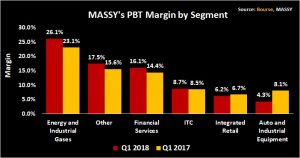 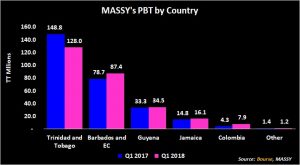 Despite MASSY’s diversification efforts, the Group’s exposure to the Trinidad and Tobago market (40.0%) continues to negatively impact PBT. The Trinidad and Tobago segment had the largest impact on PBT with a 14.0% decline, offsetting improved performance reported in all other geographical locations (which collectively saw an improvement in PBT of 11.1%). Improving economic conditions in countries such as Guyana and Jamaica may continue to provide some insulation against declines in MASSY’s main market, Trinidad and Tobago.

At a current price of $47.00, MASSY trades at a trailing P/E of 10.7 times, which is below the Conglomerate sector average P/E of 14.7 times. MASSY provides investors with an attractive trailing dividend yield of 4.5%, above the sector average of 2.9%. On the basis of relatively attractive valuations, but tempered by adjustments to changing economic realities across its main operating territories, Bourse maintains a NEUTRAL rating on MASSY.

TCL reported a Loss per share of $0.72 for the year ended 31st December 2017, compared to Earnings per Share (EPS) $0.10 reported in 2016. Earnings were negatively impacted by poor results from the concrete segment. The concrete segment experienced a 13.6% drop in revenue and a PBT loss of $9.7M.

TCL’s revenue fell 9.2% to $1.7B from $1.9B reported in FY 2016. Although operating expense improved marginally by 1.6%, the fall in revenue led to a $151.2M reduction in earnings before interest, tax, depreciation and amortisation (EBITDA). TCL’s EBITDA margin also narrowed from 24.6% in FY2016 to 18.3% in FY2017. Manpower Restructuring, stockholding and inventory restructuring costs continued to weigh on performance through a transitional period for the company. As a result, the Loss before Tax stood at $172.2M. Higher taxation charges ($82.9M) brought Losses after Tax to $255.1M, from a profit of $52.42M in FY 2016. 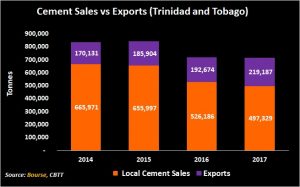 TCL continues to confront sluggish economic activity and increased competitive pressures within the Trinidad and Tobago market. According to data from the Central Bank of Trinidad and Tobago, Local Cement sales declined 5.48% in 2017, following a 19.8% decline in 2016. Exports however, improved 28.8% over the four-year period 2014 to 2017. Competitive pressures in T&T have resulted in lower prices and margins.

Weaknesses in the Trinidad and Tobago economy is reflected in the change in the Group’s revenue composition over time. The Trinidad and Tobago segment, which accounted for 41.5% of revenue in 2015 accounted for only 35.5% of revenue in 2016. However, the Jamaica segment increased its revenue contributions from 32.1% in 2015 to 40.9% in 2016. Expected growth in the Jamaican economy via improving business confidence and continued fiscal spending could drive its construction sector further in the coming years. This provides an opportunity for TCL to bolster revenue generation, placing greater focus in the Jamaican market.

TCL’s third largest geographical territory (other), which represents Guyana, Brazil and Venezuela, has improved revenue contributions from 17.6% in 2014 to 21.6% in 2016.  The new ownership structure and potential changes in strategic direction could present a platform to increase its market share in these countries. Additionally, the new structure could help to identify new markets, which may in turn lead to higher revenues in the future.

At a current price of $3.50, TCL trades at a market to book of 1.72 times, above the Manufacturing II sector average of 1.30 times. TCL offers a trailing dividend yield of 0.57%. Historically, TCL has struggled to maintain consistency in dividend payments. After 7 years of no dividends, the Group made a payment of $0.04 on 1st July 2016 followed by $0.02 on 19th July, 2017. On the basis of a weaker T&T economy, more intense regional competition, and less-than-certain dividend payments to investors, Bourse maintains a SELL rating on TCL.