This week, we at Bourse take a closer look at the highlights of the 2016/2017 fiscal Budget as presented by the Honourable Minister of Finance on September 30th 2016, placing particular emphasis on opportunities and implications to investors.

Going forward, the government assumes a cautiously optimistic growth in real GDP of 1% in 2017 and 2% each year in 2018-2020 based on a recovery in the energy sector. The Debt to GPD ratio in a declining economy has an important bearing on the country’s credit rating and the corresponding cost of borrowing, which should trend upwards.

Actual revenue in fiscal 2016 declined to $44.9 billion, compared to the revised mid-year budgeted figure of TT$52.3 billion. This was impacted by a significant decline in energy tax revenues estimated to be TT$9 billion less than FY2015 and shortfalls in value-added tax (VAT) collections FY 2016. Further, one-off capital revenues were $3 billion lower than projected due to lower divided payments (as a result of depressed energy prices) from the National Gas Company (NGC).

Actual expenditure in FY2016 was TT$52.2 billion, TT$6.8 billion less than the mid-year revised figure of TT$59.0 billion. This was achieved through major reductions in capital expenditure from TT$7 billion to below TT$5 billion, further deferment of public sector arrears (now estimated between TT$5 and 6 billion), reductions in payments to state enterprises (estimated at over TT$ 1 billion) and a reduced fuel subsidy.

FY2017 total expenditure is budgeted at TT$ 53.4 billion, representing an increase of TT$1.2 billion compared to the estimated expenditures for FY 2016.

Taxes on Tobacco and Alcohol

With effect from October 20, 2016 an increase in the excise duty on locally manufactured tobacco products by 15% will be implemented. According to the Excise Act (Amended 4 of 2014), the excise duty on cigarettes containing tobacco is $3.81 per pack of 20 and so in proportion when not so packed. Consumers will now have to pay $4.38 per pack of 20, an additional $0.57 in excise taxes or 13.7% of the sales price from 11.9% (assuming various brands of a 20-pack cigarettes average cost is $32). This measure could have has implications for WITCO, a locally-listed manufacturer of cigarettes. Imported tobacco from Common Market Origin and extra-regional sources would also be subject to increases in duties.

With effect from October 20, 2016 an increase in the excise duty on locally manufactured alcoholic products by 20% will be implemented. Customs duty on imported alcoholic products from the Common Market Origin and from extra-regional sources would also be increased by 20%. These changes could have implication for companies such as WCO, AMCL, AHL and MASSY, among others, who are involved in the manufacture, distribution and/or sale of related products.

The Honourable Finance Minister announced the introduction of a new tax bracket for individuals and corporations whose chargeable profits exceed $1 million per annum. Effective January 1st 2017, those falling within the new bracket will pay taxes of 30% on all incremental chargeable profits over and above the $1 million, whilst the first $1 million will be charged at the original 25% personal and corporation tax rate. This measure is expected to raise a total additional $560 million in taxation revenues.

Based on preliminary estimates, approximately $325 million or 65% of the $500 million expected to be raised through corporations could come from listed companies. This translates into an approximate fall in after-tax earnings of 4%, based on the trailing 12 month earnings of listed companies who could be affected. From an investor perspective, however, the taxation measure presents yet another headwind to equity valuations in an already challenging environment.

The Honourable Minister of Finance, in an effort to generate part of the estimated TT$9.6 billion in one-off revenues, announced the sale of several assets owned by directly or indirectly by the state. We consider these hereunder.

The National Gas Company of Trinidad & Tobago Limited (NGC) would put up for sale its 51% shareholding of Trinidad & Tobago NGL Limited (TTNGL) , a holding company listed on the Trinidad & Tobago Stock Exchange whose sole investment is a 39% shareholding of Phoenix Park Gas Processors Limited (PPGPL). At its current share price of $23.66 and with NGC’s 51% holding amounting to 78,948,000 shares, total proceeds from sale could be in the vicinity of TT$1.8 billion. The Minister, however, expects this sale to generate TT$1.5 billion, suggesting that the secondary offering price could be quite close to the original IPO price of $20 per share. This represents an approximately 15% discount to the prevailing market price

NGC’s sale of its TTNGL holdings would reduce its effective economic interest in PPGPL – through its direct and indirect ownership in several companies – from 63% to around 43.1%. Importantly, however, NGC’s effective control of PPGPL shareholdings would remain in the majority, falling from 90% to 51% post-sale.

With respect to the proposed divestment, some clarifications would be needed. Firstly, the TTNGL IPO  provided for two classes of shares- Class A and Class B. The Class A shares held by NGC provided for certain preferential voting rights. Potential investors would need to know how these voting rights would be changed with a full divestment. Secondly, the Minister alluded to an arrangement similar to a rights issue regarding the proposed sale.  Our reading is that this sale involves no issuance of incremental shares.  If so, it may be that existing shareholders (other than NGC) could have  a first right of refusal  on the shares to be divested. More guidance would be required in order to make any pronouncements on share valuation implications.

Through its 100% ownership of First Citizens Holdings Limited (FCHL), the State currently retains a 77.2% shareholding of the First Citizens Group (FIRST). The proposed sale of a further 20% stake of FIRST would reduce the State’s holdings to 57.2%, retaining control of the Group. Based on expected proceeds of TT$1.5bn (as mentioned in the FY2017 budget) from approximately 20% or 50,272,710 of FIRST’s ordinary shares, the secondary offering price would be somewhere in the region of $30 per share. If so, this represents a considerable discount (around 14%) to the current traded price of $35.00. Similar to the case of TTNGL, clarification would be needed regarding the first right of refusal arrangement being proposed of shareholders. 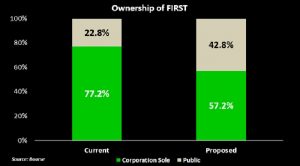 Will TGU be listed?

Other divestment initiatives, such as the sale of Evolving Technologies and Enterprise Development Company Ltd, or eTecK, were mentioned, expected to generate TT$500M. The partial sale of Lake Asphalt was proposed. 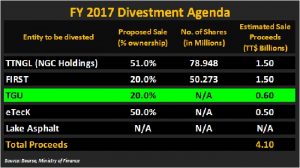 Importantly, however, was the proposed 20% sale of Trinidad Generation Unlimited (TGU) to institutional investors such as the NIB and T&T Unit Trust Corporation (UTC). TGU, a power utility company, owns the Union Estate Power Station which is capable of supplying up to 720 Mega Watts of power as compared to the country’s total generation capacity of just over 2,000 Mega Watts.

A listing such a TGU would be welcomed by the investment community as the first utility company on the local stock exchange. It would be a useful addition to capital market development. Utilities companies are widely accepted as publicly listed equity investments globally. Estimated proceeds of TT$600 million for a 20% stake would put the value of TGU’s equity at TT$3 billion.  An IPO would allow for direct ownership by the broader investment public, individual and institutional, rather than a ‘transfer’ only to quasi-state institutions. The drawback may be extended timing to bring the issue to market.

In total, expected divestment proceeds for FY2017 are estimated to be in the vicinity of TT$4.1 billion. When compared to the budgeted one-off revenue figure of TT$9.7 billion, this would leave a balance of TT$5.6 billion to be raised from other one-off sources. Although no mention has been made of Clico, this may be a one-off source by way of liquidation of the Company’s assets for debt repayment to the State.

In the context of divestment activity, opportunities should arise for investors to add to their portfolios over the next fiscal year. Combined with new taxation and other activity-dampening measures, however, the economic environment will continue to warrant vigilance in making investment decisions.

To close the projected budget deficit of TT$6bn, the government could pursue borrowing and/or further withdrawal from the Heritage and Stabilization Fund (HSF).

According to Section 15 of the HSF Act, withdrawals from the fund can only be made where actual petroleum revenues collected fall below the estimated petroleum revenues for that financial year by at least ten per cent. Previous pronouncements by government officials have suggested HSF withdrawals in FY2016 and FY2017 totalling US$1.5 billion. With just US$375 million being drawn thus far, a further US$1.125 billion or TT$7.5 billion could be effected. Such action would also add to the official reserves.

No mention has been made in the Budget as to borrowing for fiscal 2017. Using a static GPD of TT$ 145 billion, a further borrowing of TT$6 billion would take Debt to GDP up to the self-imposed 65% threshold.

With the depletion of one-off revenue sources and debt capacity approaching uncomfortable levels, the challenge is to get the economy on a growth path. Fiscal 2017 represents a holding position. A return of natural gas production to 2011 levels by 2018 will be transient, given the rate of depletion of existing gas wells without being accompanied by medium term enhancement of gas reserves. This can only be achieved through successful exploration and discovery, for which there is some cautious optimism. Even if successful, commercialization of new gas finds could have a lag time of 7-10 years. Getting the balance between optimal incentivization of exploration companies and some return through enhanced tax flows from the energy sector will be critical to economic success.   The need for further value adding to our existing gas is evident and critical. In the meantime, adjustment is necessary and unavoidable.