This week, we at Bourse continue with our two-part series highlighting the possible challenges to be faced by the Honourable Finance Minister in the upcoming 2016/2017 National Budget. The first part of our series took a closer look at the economic activity and some of the difficulties faced within a low energy price environment. Here, we consider potential initiatives to increase revenue, reduce expenditure and ultimately fund another fiscal deficit.

Against a backdrop of low energy prices and lethargic domestic gas and oil production levels, generating recurrent revenue from alternative sources will be critical to managing T&T’s economic fortunes. With a relatively short timeframe to cover the significant fall in energy-related revenues and a usually long gestation period required for diversification initiatives, it would appear that the more immediate route to revenue generation may be through taxation measures.

In the first instance, the Honourable Minister of Finance in the mid-year budget review signalled his intent to increase taxes on alcohol and tobacco products following the passage of Finance Bill No. 2 in July 2016. Secondly, the introduction of a more robust property tax regime – to be based on market values versus rental values – is another possibility, though clarity will likely have to be provided on its calculation methodology before being implemented.  Thirdly, further adjustments to Motor Vehicle Tax could also be made. A less likely (though possible) avenue for recurrent revenue improvement through taxation, would be a reversal of VAT from 12.5% to the previous level of 15%, despite its short time frame since implementation. Another approach could be upward adjustments to personal and corporate tax levels, though this would likely require consultation with the population prior to its enforcement.

Even with the implementation of all these measures,  the increase in recurrent revenue may not be nearly enough to offset the declines from energy-related sources. As an example, revenue collection from property taxes averaged TT$75M annually over the five year period 2004-2008. As another example, taxes (excise and import duty) on tobacco products were raised by 15% in 2009, with the intent to raise an additional TT$30 million in revenues. A return to 15% VAT on a wider base of goods would be difficult to estimate, should consumption patterns respond to its change. A similar story applies to changes in Motor Vehicle Tax.

As opposed to revenue initiatives, more tangible and immediate results to fiscal management could be realized through moderation of expenditure. A fine balance, however, would need to be achieved between cutting expenses and deepening the prospects of recession. For the upcoming fiscal year, it is expected that the government would adopt a more stringent policy concerning expenditure levels.

A closer look at the composition of expenditure reveals that Transfers & Subsidies account for around 57% of total Expenditure for the nine months ended June 2016. It stands to reason, then, that the most cost savings could be realized within this area. One of the most discussed subsidies included under this section is the fuel subsidy, which would have cost the state an estimated TT$1.5bn in 2015. According to the Minister of Finance in the 2016 Mid-year budget-review, the fuel subsidy amounted to TT$31 billion over the last 10 years (during which the price of WTI oil over this period averaged US$78.75).

Moving to fully-floating fuel prices in the current environment would provide much-needed expenditure reduction to the state, without significant pain to consumers of super and premium gasoline. Diesel users, however, could be significantly impacted. The diesel subsidy accounts for more than 50% (over TT$750 million) of the total fuel subsidy borne by the state according to some estimates.

In terms of Central Government Transfers, there are several potential areas which could possibly be trimmed. Transfers to Households, for example, would have ballooned from TT$6.6 billion in FY2010/2011 to an expected TT$13 billion in FY2015/2016. Over the same period, Transfers to Statutory Boards and Similar Bodies increased from TT$5.3 billion to TT$7.6 billion. State Enterprise transfers also increased from TT$1.7 billion to TT$2.2 billion. Transfers to Statutory Boards may be reduced by minimizing the ‘implicit’ subsidies afforded to them, such as financial support provided to the Water and Sewerage Authority (WASA) and the Trinidad & Tobago Electricity Commission (T&TEC). Such a move could only be accommodated through the increases in utility rates to consumers.

As noted in our previous article, Capital Expenditure amounted to TT$1.8 billion (5% of Total expenditure) for the nine months ended June 2016, lower than the budgeted figure of TT$8.4 billion (13% of expenditure) in fiscal 2015/2016. However, capital expenditure ought not to be sacrificed as it could impact the development of national infrastructure and by extension, the economy.

Lastly, wages and salaries are generally thought to be “downward sticky”, meaning that they tend move up easily but are difficult to adjust downward, given its implications on worker productivity and possible trade union activity. As such, cutting wages may prove challenging for the government, who instead may have no choice but to freeze wages and salaries at current levels and/or defer the payment of any salaries in arrears. In a previous instance, such a deferment was done by the government through the issuance of emolument bonds.

Routes to closing the gap

After adjusting recurrent revenue and expenditure, there are several options available to close what will most likely be a fiscal deficit. The divestment of state owned assets, further drawdowns from the Heritage and Stabilization Fund, borrowing and a possible currency adjustment are a few such measures.

In a previous article, we would have alluded to potential further divestments of other partially state-owned enterprises. As an example, divestments of First Citizens Bank Ltd. (FIRST) and the possible IPO of the talked about Trinidad and Tobago Mortgage Finance (TTMF)/ HMB merger, could potentially raise funds in the amount of TT$2.01 billion and TT$0.85 billion respectively.

Additionally, the Government could consider further divesting its holdings in National Enterprises Ltd. (NEL). The Government of Trinidad and Tobago, through its 66.05% direct holding and its 16.67% indirect holding (through NGC), owns 82.72% of NEL. Through its ownership, the Government has the flexibility to divest a further 31.7% of the company, while still maintaining its 51% controlling interest. This divestment could potentially generate proceeds in the amount of TT$1.7 billion at the current TT$10.01 trading price, less a 10% offering discount.

Alternatively, through its holdings in USD-generating companies like Tringen (51% ownership), NGC LNG (37.84% ownership) and NGC NGL (20% holding), NEL could package some of these holdings into a separate holding company for sale on the international market to raise USD proceeds. In turn, the state would receive proceeds from the sale of the new holding company’s shares.

With the recent domestic and external borrowing undertaken up until August 2016, there was a deterioration in the country’s debt metrics as the total debt to GDP ratio rose from 49.8% in 2015 to 56.7% (2016 projection using 2015 GDP figures).

In TT dollars, if the government were to issue 10 year domestic bonds, it would fall closely in line with the current 10-year TT treasury yield of 4.4%. Additionally, being an investment grade rated country (S&P: A-, Moody’s: Baa3), if the government were to issue 10 year US$ bonds externally, yields may fall in the 4.0-4.5% region, in line with the government’s current US$ bond maturing in 2026 (TRITOB 2026). With the prospect of a US interest rate hike and the possibility of a further credit rating downgrade, the government may have a small window in which they can borrow before their cost of funding increases. 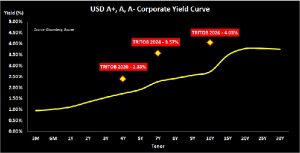 The contentious matter of currency adjustment is another tool which may be employed in closing the fiscal gap. Total exports for 2015 declined significantly to US$10.8 billion, 25% below the five year average of US$14.4 billion while imports fell marginally to US$9.4 billion, 8% below the average of US$10.3 billion over the same period. The greater decline in exports relative to imports filtered into the country’s merchandise trade balance which stood at US$1.3 billion in 2015 (↓72% from 2010 level of US$4.7 billion).

Having already fallen 4.8% year to date to $6.7615 on September 22nd 2016, by allowing the currency to float to market levels, a weakening in the USD/TTD exchange rate could improve the country’s current account balance and by extension, the balance of payments. The effect of a weaker currency could push up the cost of imports (potentially reducing the levels of imports for which there are local substitutes), while increasing the TT dollar value of exports.