This week, we at Bourse take a closer look at the main features of the 2017/2018 fiscal Budget as presented by the Honourable Minister of Finance on October 2nd 2017. We focus specifically on measures likely to affect investors and the possible investment opportunities. 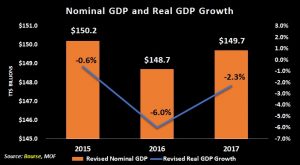 According to the IMF, real GDP growth is projected to be 3.4% for 2018. This recovery is premised on a rebound in the energy sector and the successful implementation of public sector programs. Debt to GDP plays an important role in the country’s credit rating and more so on its cost of borrowing. Given its current position at 62.6% in September 2017 up from 58.8% in the corresponding period in 2016, cost of borrowing is expected to increase.

Actual revenue in fiscal 2017 was revised to $37.8 billion from a projected $47.4 billion at the 2017 mid-year review. This shortfall of 25.4% or $9.6 billion was caused by a delay in expected revenue receipts from the property tax, gambling and gaming sector and one-off revenue flows from the sale of CL Financial’s assets. Furthermore, the actual weighted average prices of crude oil and natural gas were US$48.03 per barrel and US$2.00 per MMBtu respectively when compared to the budgeted estimates of US$48.00 per barrel and US$2.25 per MMBtu respectively.

Actual expenditure in fiscal 2017 amounted to $50.5 billion, TT$3 billion less than the budgeted estimate of $53.5 billion. Consequently, there was a sharp increase in the overall budget deficit from $6 billion (4.0% of GDP) to $12.6 billion (8.4% of GDP). This gap was financed through a drawdown of US$252 million or TT$1.7 billion from the Heritage and Stabilization Fund (HSF), domestic borrowing ($6.6 billion) and the remainder through foreign loans.

Accordingly, the fiscal deficit for FY 2018 is estimated at $4.76 billion (3.1% of GDP). The Honourable Minister noted intentions to finance the deficit by tapping into the domestic market to raise $4.5 billion. Furthermore, asset sales relating to CL Financial’s liquidation coupled with drawdowns from the HSF are expected to generate $7.5 billion in non-core revenue.

The Honorable Minister of Finance indicated that the Government intends to divest the major strategic assets of the CL Financial Group, in an effort to recover in excess of $15.6 billion. This would be done through public offerings on the Trinidad and Tobago Stock Exchange (the Exchange) or through placement in a new National Mutual Fund. The Minister indicated that the National Mutual Fund would be comprised of 29.9% (61.68 million shares) of Angostura Holdings Limited (AHL) and 16.0% of Home Construction Limited (HCL). The fund is expected to be worth $1.4 billion. Based on AHL’s closing price as at September 29 of $15.23, the estimated value of AHL would be $939.3 million, leaving the HCL component at $460.7 million.

Investors will be keenly awaiting more information on this and Home Construction Limited in particular, to determine if this investment will be worthwhile. It should be noted however, that many of the close-ended funds trading on the exchange have done so at a discount to the Net Asset Value (NAV). Clico Investment Fund (CIF) for example, has traded at an average discount of 7.5% to its net asset value over the last two years.

Among the fiscal measures announced was a higher corporation tax rate for commercial banks. Effective January 1, 2018, commercial banks will now pay 35% on chargeable profits, up from the current 30%. The three locally listed banks, First Citizens Bank Limited (FIRST), Republic Financial Holdings Limited (RFHL) and Scotiabank Trinidad and Tobago Limited (SBTT) could face some pressure on after tax earnings as a result.

If Profit before Tax is held constant, an additional 5% in taxation expense could result in a decline in Profit after Tax between 4.8% and 6.6% for these banks. This decline in earnings, coupled with current (P/E) valuations, could result in a decline in the share prices by an equal amount. It should be noted however that RFHL generates over 30% of its operating income outside of Trinidad, thereby limiting the impact of the increase in corporate tax.

The Honourable Minister of Finance signalled the government’s intentions to pursue further withdrawals from the HSF, in order to finance the 2018 fiscal deficit. This measure, coupled with the sale of CL Financial’s assets, is expected to raise $7.5 billion.

It was also noted that discussions are underway to separate the Heritage and Stabilization components into two separate funds, with the majority going towards the Heritage component.

In order to fund the fiscal deficit for 2018, the Honourable Minister of Finance alluded to the fact that the Government will utilize all available financing options, one being tapping the domestic capital market. Domestic borrowing for fiscal 2018 is expected to be $4.5 billion or 3% of GDP. This additional debt burden could increase Net Public Sector Debt from $93.7 billion (Sep-17) to $98.2 billion. This represents an increase in Net Public Sector debt to GDP from 62.6% (Sep-17) to an estimated 65.6% (holding 2017 GDP constant). If the Government has to provide a guarantee for the Petrotrin 2019 bond in the event of early refinancing, the debt to GDP ratio could reach 69.5%, with Net Public Sector Debt totalling $104.0 billion. 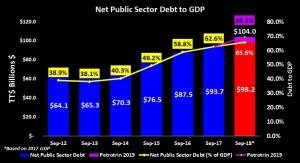 Assuming the Government were to issue domestic 10-year bonds, the issue yield may fall in line the with the current 10 year TT-Treasury yield of 4.6% (as at July 2017). This compares favourably with the outstanding domestic bond issues due to mature in 2018, which were issued at yields ranging between 6.2% – 6.5%. However, this steep drop in yields is likely to impact individual and institutional investors holding bonds due to mature in 2018. Such investors would face a significant reduction in interest income if proceeds were to be reinvested into proposed new issues.

Given the high demand for domestic bonds and high levels of liquidity in the financial system, the government’s bond auctions for 2018 are likely to be successful. However, it must be noted, that the country’s local currency long-term credit rating (S&P: BBB+, Moody’s: Ba1, Outlook: Stable) could come under pressure in the event of any additional borrowings to fund revenue shortfalls or refinance debt of state-owned enterprises such as Petrotrin. 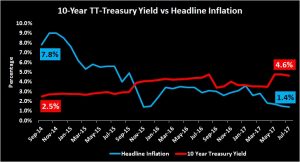 If a new 10-year bond is indeed issued at 4.6%, investors who choose to participate will earn a real rate of return of 3.2%, given that current figures point to headline inflation of 1.4%. This compares favourably to the situation in September 2014, where headline inflation stood at 7.8%, while a 10-year bond yielded 2.5%. In other words, investors were earning a negative real rate of return of 5.3%

Investors will be keenly looking ahead to the initiatives outlined in the FY 2018 Budget, as it relates to opportunities. As always, investors should consult a trusted and experienced advisor, such as Bourse, to make a more informed investment decision.