This week, we at Bourse review the third quarter performance of two stocks withing the Banking sector, Scotiabank of Trinidad and Tobago Limited (SBTT) and FirstCaribbean International Bank Limited (FCI). Despite an increasingly difficult local economic environment and continuing low credit demand, the Banking sector has, thus far, proven resilient. SBTT has delivered strong earnings growth for the nine-month fiscal period, while FCI’s results were negatively impacted by higher costs.  We take a closer look at their respective performances and provide some perspective on future performance. 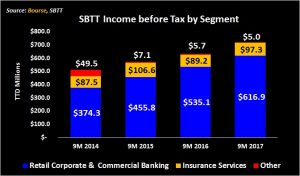 From a segment perspective, core banking remains the major income generator. Retail Corporate & Commercial Banking represents 86% of Income before Tax. This continues to be SBTT’s best performing segment, increasing 64% over a four year period from $374.3M in for the nine-month period in 2014 to $616.9M in the comparable period 2017.  The Insurance Services segment remains a distant second, with 11% growth from $87.5M in third quarter 2014 to $97.3M in the comparable period 2017. 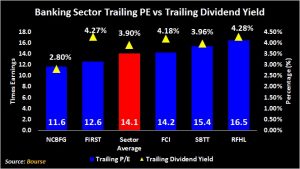 At a current price of $58.05, SBTT trades at a trailing P/E of 15.4 times, above the Banking sector average of 14.0 times. The trailing dividend yield stands at 3.96%, in line with the sector average of 3.91%. On the basis of improving performance and an attractive dividend yield, but mitigated by a subdued economic environment and fair valuation, Bourse maintains a NEUTRAL rating on SBTT. 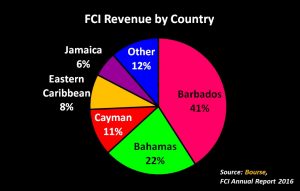 FCI remains geographically diversified with operations throughout the Caribbean.  The Group’s siginificant exposure to Barbados (41% of revenue) remains a concern, given negative economic environment of the country. 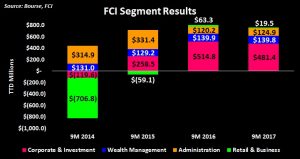 From a segment perspective, Corporate and Investment Banking has been FCI’s main contributor to Income before Tax, averaging 62% for the last two years. This segment amounted to TT$ 481.4M for the nine month period ended July 2017, a decline of 6.5% over the comparable period in 2016. The second largest segment, Wealth Management, remained relatively flat year on year. The Retail and Business segment contributed TT$ 19.5M for the period, which was 69.2% lower than 2016. However, this represents a significant improvement from 2014, where this segment experienced losses of TT$ 706.8M.

At a current price of $8.10, FCI trades at a trailing P/E of 14.2 times, marginally above the Banking sector average of 14.0 times. The stock offers investors a trailing dividend yield of 4.18%, which is above the sector average of 3.91%. Investors may recall that FCI offers investors the added benefit of investing in TTD and receiving dividends in USD. As such, investors are provided with a hedge against further depreciation of the TTD. Looking ahead, FCI will face headwinds with some of the territories it operates in, which could weigh on results. Bourse maintains a NEUTRAL rating on FCI.