This week, we at Bourse review the nine-month results for the period ended June 2017 of two stocks within the Banking sector, Republic Financial Holding Limited (RFHL), and First Citizens Bank Limited (FIRST).

Republic Financial Holdings Limited (RFHL) reported diluted Earnings per Share (EPS) of $5.93 for the nine-month period ending June 2017, an increase of 5.7% compared to the EPS reported for the same period in 2016. 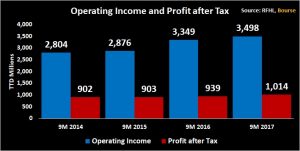 RFHL has been able to grow both Operating Income and Profit after Tax in each consecutive year since the third quarter of 2014. Operating Income advanced 24.7% while Profit after Tax grew 12.4% from nine-month 2014 to nine-month 2017. The growth in Operating Income was attributed to the growth in RFHL’s Net Interest Income from the 3rd quarter 2014 to the corresponding period in 2017. Other Income fell over the same period. RFHL has been able to grow its loan and portfolio business despite the economic headwinds in its operating territories, particularly its main market Trinidad and Tobago.

While RFHL had success growing Operating Income, controlling Operating Expenses and loan impairments have been a challenge. Operating Expenses have risen from $1.57B in the nine-month 2014 to $2.6B in the corresponding period in 2017, an increase of 65%. Consequently, RFHL’s operating efficiency ratio has deteriorated from 56.2% to 58.1% over the same period. This compares unfavourably to its competitors Scotia Bank of Trinidad and Tobago Limited and First Citizens Bank Limited, which reported operating efficiency ratios of 38.7% and 51.2% respectively. Loan impairment expenses have also increased from $79.2M at the end of the third quarter 2014 to $129.9M at the end of the third quarter 2017. Higher loan loss expense may be a consequence of the challenges in the economies RFHL operates in, more so the Trinidad and Tobago market where unemployment is rising and businesses are under pressure due to difficulty accessing foreign exchange and the economic downturn. 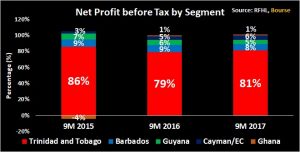 Due to RFHL’s diversification strategy, there has been less reliance on the Trinidad and Tobago market for Net Profit before Tax. Countries such as Ghana and the Cayman Islands/ Eastern Caribbean have accounted for a growing share of Net Profit before Tax from the third quarter period in 2014 to the equivalent period in 2017. While currently RFHL operates in several territories as part of its diversification strategy, there have been some economic challenges. In the long term however, this strategy should be beneficial. With improving economic prospects in some of the territories RFHL operates in, alongside cost containment and astute management of its loan and investment portfolios, RFHL’s performance should improve in the future. 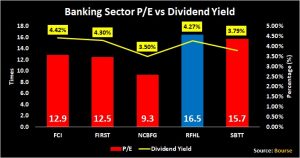 Total Net Income grew 19.4% ($246.4M) from the nine month period ended June 2014 to the corresponding period in 2017. This growth is mainly attributable to growth in Net Interest Income, which grew 21.3% or $185.4M for the period. Other Income grew 15.2% or $61M over the same period. Net Interest Income improved by 11.2% year-on-year. According the Chairman, this growth was due to the expansion in the Investments and Loans portfolios of 7.0% and 5.7% respectively. 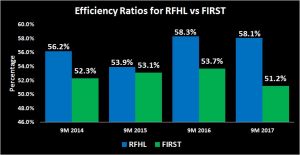 FIRST’s efficiency ratio, a measure of how well the bank manages its expenses, stood at 51.2% as at June 2017. This was an improvement from 53.7% reported in June 2016. With respect to other locally listed banks, FIRST efficiency ratio was marginally above the average of 49.3% as at June 2017. Looking ahead, expense management will be of key importance to overall profitability.