This week, we at Bourse examine the six-month performance of Guardian Holdings Limited (GHL) and the nine months results of NCB Financial Group Limited (NCBFG). We look at factors contributing to the strong performance of both entities and provide a recommendation

Guardian Holdings Limited (GHL) reported Earnings per Share (EPS) of $0.83 for the six month period ended June 2017, an 18.6% increase over its reported EPS for the comparable six-month period in 2016.

Total Net Income from all segments grew 2.2% (excluding ‘Other consolidating adjustments’) from half-year 2016 to the equivalent period in 2017.

The LHP segment continued to be the main contributor to overall income accounting for 63.8% of total Net Income at half-year 2017. Net Income from Asset Management improved $2.0M year-on-year to $43.0M and accounted for 5.2% of total Net Income. Given the declining contribution of Insurance underwriting to Net Income and the relatively small contribution of brokerage activities, it would appear that GHL’s performance is becoming increasingly reliant on Net Income from Investing activities, which may be subject to vagaries of financial markets. 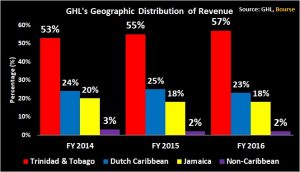 With respect to geographic diversification, over the last three years the Trinidad and Tobago market has accounted for a greater share of GHL’s revenue (57%). Notwithstanding the economic challenges in the territories GHL operates in, the firm’s focus on improvements in investing income has led to resilience in profitability. According to the Central Bank of Trinidad & Tobago, activity is expected to improve in Trinidad and Tobago during the second half of 2017. Jamaica’s economy, meanwhile, is projected to grow at a faster pace in 2017.

At a current price of $16.50, GHL trades at a trailing P/E of 9.5 times, above its three-year average of 8.9 times. The current dividend yield is 4.06%, above the sector average of 3.49%. On the basis of a relatively attractive valuation, but tempered by continued challenges in its Insurance Underwriting activities, Bourse maintains a NEUTRAL rating on GHL.

NCB Financial Group Limited (NCBFG) reported an EPS of TT$0.32 for the nine month period ended June 2017, an improvement of 48.0% when compared to the EPS of TT$0.21 reported in the equivalent period in 2016.

NCBFG’s Net Interest Income grew TT$1.17B at the end of the nine-month period, an increase of TT$61.2M (5.5%) over the corresponding period in 2016. Primarily due to higher revenues from Net fees and commission income and Gains on foreign currency and investment activities, Operating Income grew 16.2% to TT$2.3B. Operating Expenses rose TT$122.3M mainly on account of higher staff costs and other operating expenses. As a result, Operating Profit rose 31.0% to TT$857.7M. Share of Profit from associates increased $97M or 470.8%. This contributed to NCBFG’s Profit after Tax of TT$778.5M, a 48% increase compared to Profit after Tax of TT$525.6M reported in the prior period.

Non-Interest Income has grown faster than Interest Income and currently accounts for a larger proportion of total Operating Income compared to the nine month period ended June 2014. Over the past four years, Non-Interest Income has grown from 42% of Total Operating Income in nine months 2014 to 50% in nine months in 2017. Net Fees and commissions has grown 31% year-on year and greater than any other income stream in the last four years. From the end of the third quarter 2014 to the equivalent period in 2017, Net Fees and Commissions increased 66% due to growth in NCBFG’s loan and unit trust portfolios. Gains on Investment activities and Other Income increased 22.0% year-on-year, a faster pace than Net Interest Income, which grew 5.5% year-on-year.

While Profit before Tax grew TT$300.0M, Share of Profit of Associates accounted for TT$96.99 or 32.3% of the increase. The growth in Share of Profits from Associates is primarily due to the inclusion of earnings from NCBFG’s acquisition of 29.99% of Guardian Holdings Limited (GHL), which was finalised in May 2016. 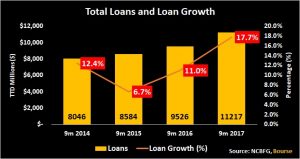 NCBFG has been succesful in expanding its loan portfolio and as a result been able to grow both interest and non interest income. Overall, loan growth has increased annually from the nine month period in 2014 to the same period in 2017. The growth in overall loans (year-on-year) was mainly attributable to 23% loan growth in NCBFG’s Retail Banking portfolio. NCBFG’s has been able to expand credit due to the turnaround in the Jamaican economy which has recorded nine consecutive quarters of economic expansion at the end of the first quarter of 2017. Besides growing its loan portfolio 17.7% year-on-year, NCBFG has also been able to reduce its non-performing loans as a percentage of total loans to 2.6% at the end of the third quarter 2017 from 4.8% in the same period in 2016.

In Jamaica, NCBFG trades at a trailing P/E of 10.8 times, in line with other financial instituions such as JMMB Group Limited, Scotia Investments Jamaica Limited and Scotia Group Jamaica.

In Trinidad, at the current price of $4.20, the trailing P/E is 9.6 times, above its three year average of 7.5 times. The trailing dividend yield is 3.50%, in line with the market average of 3.62%. On the basis of fair valuations, Bourse maintains a NEUTRAL rating on NCBFG.