This week, we at Bourse review the six month performance of The West Indian Tobacco Limited (WCO) and Trinidad Cement Limited (TCL).  Both companies have felt the impacts of a slowdown in economic activity and increased competitive pressures. We discuss the performances and provide a brief outlook. 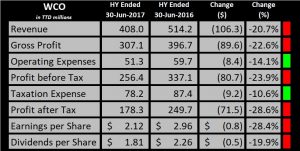 WCO’s decline in revenue is likely attributable to the economic climate both within the wider economy, policy changes and competitive forces. WCO continues to grapple with heightened competition from illicit tobacco products, which appears to be impacting sales.  A 15 percent increase in the excise taxes on imported and locally manufactured cigarettes, imposed on October 20th 2016, has led to revenue pressures, with WCO facing the decision to either absorb some or all of this higher cost of sales or pass this cost onto consumers. Geographic concentration has not worked to the advantage of WCO, with the Trinidad and Tobago market accounting for 89.3% and 88.3% percent of WCO’s revenue in HY 2016 and HY 2017 respectively.

WCO’s reliance on imported raw materials in an environment where foreign exchange has become an issue for importers could contribute to ongoing pressures on earnings, particularly where the majority of sales are in local currency. 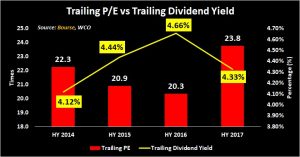 At the current price of $125.82, WCO trades at a trailing P/E of 23.8 times, above the Manufacturing sector 1 average of 22.3 times. The current P/E ratio is also above WCO’s three year P/E average of 21.4 times. The dividend yield currently is 4.32%, above the sector average of 3.61%.  On the basis of a still-attractive dividend yield, but tempered by falling earnings, a commensurate decline in dividends and a relatively high P/E ratio, Bourse maintains a NEUTRAL rating on WCO.

Recessionary conditions in TCL’s main market Trinidad and Tobago has adversely affected the construction sector and cement sales. Local sales of cement has declined 13.7% year-on-year from for the period January to June inclusive (2017 vs. 2016) and 32.6% from the comparable periods in 2015 and 2017. Besides declining activity in the construction sector, TCL continues to confront competition from imported cement.

According to the Central Bank of Trinidad & Tobago’s May 2017 Monetary Report (CBTT), the domestic economy is expected to modestly recover in the second half of 2017. For TCL, future improvements in earnings will depend on how successfully TCL can compete against imported cement, construction activity in the local economy and  product export initiatives.

At the current price of $4.14, TCL trades at a trailing P/E of 153.33 times. The trailing dividend yield is 0.48%. On the basis of declining earnings, a challenging business environment and the absence of regular dividend payments, Bourse maintains a SELL rating on TCL.