This week, we at Bourse review the performances of ANSA McAL Limited (AMCL) and one of its subsidiaries, ANSA Merchant Bank Limited (AMBL) for the year ended December 2016.AMCL incurred two significant one-off events which negatively impacted Earnings per Share, while AMBL’s profits marginally improved. We take a closer look at the performances and provide a brief outlook.

AMCL reported Earnings per Share of $4.01 for the year ended December 2016, a decrease of 9.9% from $4.45 recorded in the previous year. During the year, the Group incurred two one-off events, a fire at Carib Glass Limited and an increase in corporate taxation. This resulted in a reduction in Profit After Tax of $76M. Without these two one-offs, the Group would have generated Earnings per Share of approximately $4.45.

In 2016, the Group’s revenue from its Automotive, Trading and Distribution segment, which accounts for 43% of total revenue, declined by 3.7%. With respect to Automotive, the fall in new car sales from 2015 to 2016 of 2,562 vehicles (13.7%) would have weighed on revenue. Looking ahead, it is unlikely that this trend will be reversed, given the persistent economic downturn coupled with foreign exchange pressures. New car sales totalled 1,993 vehicles in January and February 2017, 22% lower when compared to the same period in 2016. 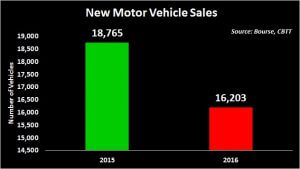 The Manufacturing, Brewing and Packaging segment accounted for 36% of revenues in 2016. Despite the fire at Carib Glass Limited, revenue in this segment remained relatively flat. During the year, the Group made two acquisitions, Easi Industrial Supplies Limited (T&T) and Indian River Beverage Corporation (USA). The Group expects both acquisitions to generate US dollar earnings, which would boost overall revenue within the segment and provide a hedge against further depreciation of the TT dollar.

Revenue from the Insurance and Financial services segment grew by 5.3% in 2016. This segment would have benefitted from the strong performance of Ansa Merchant Bank Limited (AMBL), which experienced an increase in Total Operating Income of 12.9%.

A fall in revenue of 21.7% in Guardian Media Limited (GML) would have negatively impacted the Media, Retail, Services and Parent segment. Revenue in this segment deteriorated by 24.1%. Looking ahead, it is likely that this segment will continue to struggle in the current economic environment. 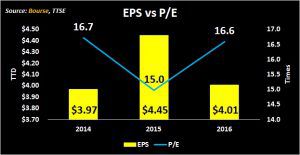 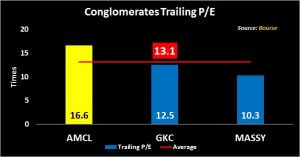 On the basis of increased potential for revenue growth, but tempered by a pessimistic economic environment and a relatively high valuation, Bourse maintains a NEUTRAL rating on AMCL.

Ansa Merchant Bank Limited (AMBL) generated Earnings per Share of $2.94 for the year ended December 2016, an improvement of 1.7% from the previous year. Total Operating Income increased by $92.7 million, driven by growth across all segments including Insurance Revenue and Loan Fees. Approximately 50% of the growth in revenue was a result of a $46 million improvement in foreign exchange trading and gains. AMBL incurred higher Insurance Claims and Interest Expenses of $18.7M and $16.5M respectively. Net Operating Income climbed by $40.2M. Other key highlights include higher personnel expenses, which was driven by an increase in salaries and bonus expense of $13.9M. Profit Before Tax stood at $322.M. In 2015, AMBL benefited from a reduction in deferred taxes of $18M, which was not repeated in 2016. This resulted in a higher effective tax rate of 22% in 2016, from 17% in 2015. Profit After Tax moved from $247.4M to $251.7M. 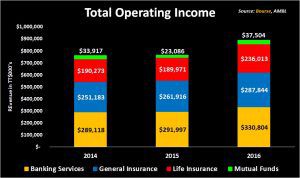 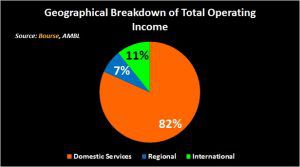 Operating Income for the Life and General Insurance services  segments improved in 2016 after a flat 2015 performance. Continued slowdown in the local economy could impact these segments as the purchasing power of consumers weaken.

At a current price of $40.00, AMBL trades at a trailing P/E of 13.6 times, above the Non-Banking Finance sector average of 10.8 times (excluding N.E.L) and is also the highest among its peers.  The stock offers investors a trailing dividend yield of 3.0%, in line with the average trailing dividend yield of 3.2% in its sector. On the basis of a fair valuation, but tempered by weak economic fundamentals in its main market, Bourse maintains a NEUTRAL rating on AMBL.