This week, we at Bourse review the 2016 performances of Angostura Holdings Limited (AHL) and Unilever Caribbean Limited (UCL), two companies within the Manufacturing I Sector. AHL would have confronted weaker revenues, while UCL’s earnings were impacted by taxation. We highlight some key areas of the performances and discuss possible implications for investors.

Angostura Holdings Limited (AHL) reported Earnings per Share of $0.59 for the year ended December 2016, 26.3% lower when compared to the previous year.

AHL’s revenue declined by $28.9M, while Cost of Goods Sold fell $16.9M. Although Gross Profit decreased year-on-year, the Gross Profit Margin was maintained at 59.8%. Higher Selling and Marketing expenses and Administrative expenses in FY2016 contributed to a fall in the Operating Profit Margin to 28%, from 33% in FY2015. During the year, AHL incurred a one-off legal claim expense amounting to $15.9M. On a positive note, the Group benefited from Foreign Exchange Gains totalling $12.8M. Combined with a higher effective tax rate of 29% in 2016 (versus 25% in 2015), Profit for the period amounted to $121.9M, a decline of 25.5%.

AHL’s revenue has been on a downward trend over the last three years. Revenue from the Commodity Trade segment improved 13% in 2015, but declined 18% in 2016. More importantly, the Branded Trade segment which accounted for 82% of total revenue in 2016, fell 7% and 0.8% in 2015 and 2016 respectively. Higher taxes on alcohol products, which was imposed in October of last year, may have negatively impacted the Group’s revenue. This is reflected in the decline in 4th quarter revenue of 24.6% in 2016, when compared to 2015.

Looking ahead, the declining revenue trend is unlikely to be reversed in the near term as consumer spending remains constrained in the domestic market. Cost containment will be of key importance if the Group is to maintain its efficiency and margins. Lower revenue coupled with higher expenses, led to an overall fall in Profit Before Tax of $46.6M or 21.4%. Profit Before Tax Margin also declined from 34% to 28%. Like all other local companies listed on the stock exchange, AHL would have felt the impact of higher corporate taxes on its Profit After Tax, as evident by a higher effective tax rate. This is likely to continue to weigh on earnings in the future.

Positively for AHL, the Group remains a net earner of USD, which stems from its strong international brand. This could act as a hedge against a depreciating TTD in the long run.

At a current price of $15.00, AHL trades at a trailing P/E of 25.4x, above the Manufacturing 1 sector average of 22.3x (excluding Guardian Media Limited). The group declared a final dividend payment of $0.18 per share, payable on 21st April 2017, which takes trailing 12-month dividends to $0.30 per share. The stock offers a trailing dividend yield of 2.0%, below the sector average of 3.3% (excluding GML).  On the basis of a strong international brand with stable USD earnings, but tempered by lower consumer demand in its local market, Bourse maintains a NEUTRAL rating on AHL. 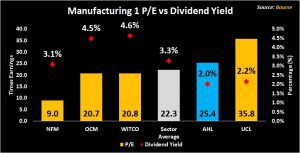 UCL, like most other most other firms, is likely to continue facing a challenging economic environment in its main market Trinidad and Tobago (which accounts for 60% of its total revenue). Difficulty in accessing adequate foreign exchange and higher tax rates could also place pressure on net profit margins.

At a current price of $58.00, UCL is trading at a trailing P/E of 35.8x, higher than its five-year P/E average 28.9x times and the Manufacturing sector I average of 22.3x (excluding GML). The Board of Directors increased the final dividend per share to $1.25, up $0.05. This brings the trailing dividend yield to 2.2%, which is lower than the sector average of 3.3%. On the basis of an above-average relative valuation, below-average dividend yield and continued headwinds in the challenging Trinidad & Tobago economic environment, BOURSE maintains a SELL rating on UCL. 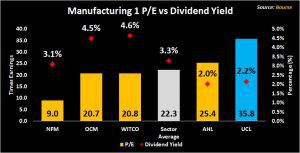