This week, we at Bourse take a closer look at the performances of Trinidad and Tobago NGL Limited (TTNGL) and Guardian Holdings Limited (GHL) for the year ended December 2016. While exports of Natural Gas Liquids (NGLs) remain low, energy commodity prices have steadily improved throughout the year, which resulted in an improvement of TTNGL’s Share of Profit from PPGPL. GHL benefitted from growth in Net Income from Investing Activities. We discuss the main factors which affected the performances as well as provide an outlook. 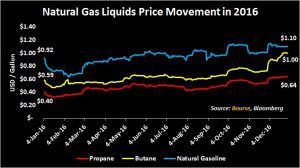 The prices of Natural Gas Liquids (NGLs), based on a weighted basket of propane, butane and natural gasoline, averaged US$ 0.713 during 2015 and US$ 0.685 in 2016, down 3.9%. PPGPL’s revenue would have benefitted from improving NGL prices throughout 2016. Based on publicly available data, exports of NGLs by PPGPL increased in the latter half of the year, which coincided with higher NGL prices.

On the volume side however, export of NGLs from PPGPL remained subdued when compared to previous years. Export of propane, butane and natural gasoline declined by 21%, 27% and 20% respectively, from 2015 levels.

Looking ahead, new gas production – expected to be commissioned in 2017 and 2018 – could boost production and subsequently export levels of NGLs. On 15th March 2017, the Government of Trinidad and Tobago signed an agreement with the Government of Venezuela, with respect to the construction, operation and maintenance of a gas pipeline, connecting the Dragon Field in Venezuela to the Hibiscus Field in Trinidad. Venezuela’s Minister of Petroleum, Nelson Martinez, who signed the agreement on behalf of his Government, stated that the idea was to start producing between 200 and 300 standard cubic feet of gas per day (mmscfd), within 2 to 3 years. This coincides to roughly 7.5% of 2016 levels. This development will likely be viewed as material progress in efforts to strengthen cooperation in the energy space between hydrocarbon-rich Venezuela and Trinidad & Tobago’s well-established processing and logistics capabilities.

In 2017, propane prices have continued to improve, up 3.71%. Butane prices however, have declined 19.7% year-to-date, while natural gasoline have remained relatively flat. 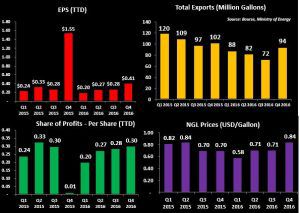 TTNGL reported a cash position of $366M as at December 2016, or roughly $2.36 per share. As a holding company with relatively limited cash expenses, this balance could become available for distribution to investors overtime.

On the basis of (i) a high trailing dividend yield, (ii) a healthy cash position, (iii) the potential of continued stabilization / recovery of revenues through expected improvements in local energy production and global pricing and (iv) an implicit hedge against the TTD through its USD earnings, Bourse maintains a BUY rating on NGL.

For the year ended 31st December 2016, GHL reported Earnings per Share (EPS) $1.61, an increase of $0.18 or 12.6% over the corresponding period in 2015. Net Income improved by $186.0 M (12.8%), driven by growth in Net Income from Investing Activities of $239.4M. This was offset by a decline in Net Income from Insurance Underwriting Activities amounting to $49.6M. In 2015, the Group benefitted from a non-recurring gain resulting from a change in Jamaican tax legislations. According to the Group, Net Income from Insurance Underwriting Activities would have increased year-on-year (YOY) without this impact. GHL’s Operating Expenses climbed by $111.5 M or 12.6%, which was attributed to costs associated with strategic investments, according to the Deputy Chairman. Profit Before Tax increased by $71.9 M (16.0%) in 2016. GHL faced an effective tax rate of 25% in 2016, marginally higher than the 23% in 2015. Profit After Tax increased by $43.6 M or 12.6% YOY. 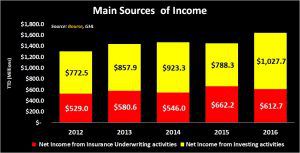 Net Income from Investing and Insurance Underwriting Activities accounted for 99.8% of GHL’s total Net Income in 2016. GHL’s Income from Investing Activities, which account for 62.5% of total income, grew by $239.4 M or 30.4%. This was attributable to improvements in the Group’s major categories of investment income and fair value gains. Looking ahead, the sustainability of this performance could be challenged, given the economic performance in Trinidad and Tobago and other territories in which GHL operates. The Property and Casualty segment posted a $12.6 M fall in Net Income over the comparable period in 2015. The performance of this segment may be subdued in the foreseeable future due to soft market conditions and a challenging economic environment. The Life, Health and Pension segment has continued to grow at a stable rate over the last 5 years.

At a price of $16.00, GHL trades at a trailing P/E of 9.4x, below the sector average (excluding NEL) of 10.9x. The stock offers a trailing dividend yield of 4.13%, above its sector average of 3.06%. GHL’s share price has advanced 26.5% year to date. On the basis of a relatively attractive dividend yield and moderate valuation, but tempered by an uncertain economic environment, Bourse maintains a NEUTRAL rating on GHL.