Budget 2020: Investor Opportunities on the way?

This week, we at Bourse review some of the highlights of the fiscal year 2020 Budget, as presented by the Honourable Minister of Finance on October 7th, 2019. We also take a look at some of the main fiscal stimulus measures mentioned and the investor opportunities which might be on the horizon. 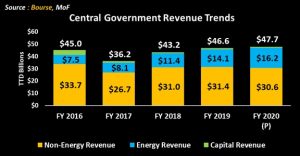 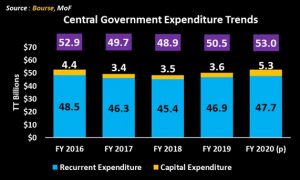 Government expenditure for FY 2020 is projected to grow by 5.0% YoY, amounting to $53.03B. With Capital Expenditure expected to be maintained at FY2019 levels of $3.59B, the increase would be mainly as a result of higher recurrent expenditure. Should the FY 2020 expenditure materialize, the fiscal deficit could widen to $5.287B or 3.1% of GDP.

The depletion of Official Foreign Reserves continued into 2019 with the most recent balance amounting to US$7.1B, 0.4B lower than the US$7.5B reported last year. Resultantly, Import Cover lessened from 8.8 months in September 2018 to 7.9 months in August 2019. While Import Cover continues to trend downward, its current level is still above the 3-month international standard.

Headline Inflation as at August 2019 saw a marginal increase at 1.2% when compared to 1.0% in August 2018. One notable fiscal measure for FY2020 was the decision to increase the minimum wage by 16.67% from $15 per hour to $17.50 per hour. This change should directly increase the disposable income of approximately 194,000 persons in the workforce. Furthermore, the 10% increase in wages for OJT workers, 15% increase in wages for CEPEP workers and contractors and 15% increase in URP payments should result in more disposable income in the hands persons with a higher propensity to spend. Whether or not these initiatives lead to direct/indirect increases in the cost of operations for businesses and/or upward pressure on prices remains to be seen.

FY 2019/2020 marked the progressive implementation of green initiatives into the domestic economy. The government proposed a 100% tax credit allowance on the cost of Solar Water Heating Equipment, an effort expected to take effect from January 1, 2020. The Minister has also promised to improve energy efficiency by limiting inefficient energy usage across government institutions, providing modern LED bulbs to an estimated 400,000 households which currently use energy intensive incandescent bulbs and the removal of taxes and duties on such LED bulbs over the next five years to support the transition.

In a bolder move to create a ‘greener’ T&T, the Finance Minister also proposed a ban on the importation of Styrofoam and a mandate to food containers manufacturers to make their products biodegradable.

The Honorable Finance Minister noted that the ‘preferred’ source of financing the FY2020 deficit of $5.3B would be from ‘non-debt creating’ sources. In the absence of raising debt financing – whether as a direct issue of government bonds or indirectly through bonds issued by an entity holding assets wholly-owned by the state (as in the case of the National Investment Fund) – the state would have to pursue either (i) the sale of assets or (ii) drawdown from savings.

In the case of asset sales, no specific mention was made of any assets which would be made available to the public, for example, through Initial Public Offerings (IPOs) or Additional Public Offerings (APOs) as would have been the case in prior years. In terms of drawdowns from savings, certain conditions would have to be met before any of the US$6.25B in the Heritage and Stabilization Fund (HSF) could be accessed. 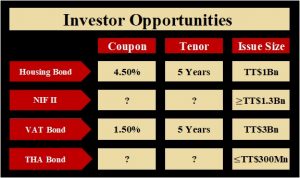 Several potential bond opportunities were, however, noted including: