As we come to the close of 2016, this week we at Bourse review the performance of the major international markets throughout the year. This year can quite aptly be described as the year of surprises, as investors and markets alike witnessed the most unlikely of outcomes in terms of global events. Included among these events was the decision by Britain to exit the European Union (Brexit), the victory of Donald Trump in the U.S. elections, the agreement by O.P.E.C. and non-O.P.E.C. countries on a supply cut in oil production and most recently the announcement of a faster-than-expected path of US interest rate increases. Against this backdrop, investors will be looking ahead to 2017 as a year which promises both opportunity and volatility. We discuss 2016 briefly and consider just how investors might position their portfolios for the upcoming year.

2016 has proven to be a volatile year both for developed and developing markets. The US equity market – as measured by the S&P500 Index – have wildly from a year-to-date decline of 10.5% in mid-February to its current all-time high of 2271 (up 11% year-to-date), which was hit on December 13th.

Depressed energy prices played a significant role in the subdued performance of the market at the start of the year. Crude Oil prices, as measured by WTI, also fell to its low on February 11th (down 29.2%), mirroring the decline in the equity market. As prices started to recover, the S&P500 followed suit. The major event in the U.S. was the surprise result of the elections on November 9th 2016, which saw Republican candidate Donald Trump emerge victorious. Investors seem to have welcomed the proposed new fiscal policies of increased infrastructural investment and corporate tax cuts, rotating investments from defensive sectors to cyclical sectors. This has translated into the S&P500 improving 4.33% post-election. In addition, the Fed increased interest rates on December 14th 2016, bringing the rate to 0.5% to 0.75%. The U.S. economy continues on its path of moderate growth, coupled with a strengthening labor market and increasing inflation. 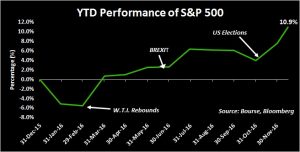 Across the pond, the European equity markets have retreated 5% Year-to-Date (in USD terms). On June 23rd, Britain voted – widely known as Brexit – to leave the European Union. Coming as a surprise to investors and raising global uncertainty, the UK’s FTSE 100 equity index fell 15.8% in the 4 days following Brexit, before the start of a gradual recovery.  Many economists believe the full impact is yet to be felt, while some warn firms to prepare for a ‘hard Brexit’. With subsiding panic and uncertainty, the FTSE 100 has recovered somewhat, currently trading marginally below pre-Brexit levels. Overall, UK equities have returned -5.3% YTD.

Across Europe markets have remained mostly flat. In France, the CAC 40 returned 0.3% YTD (USD), while in Germany, the DAX returned 2.1% YTD (USD). 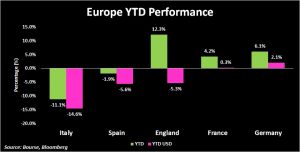 Latin American equity markets have also been a surprise outperformer in 2016 despite weak economic fundamentals, advancing 27% YTD (USD). The positive returns have been driven by the Brazil’s IBOVESPA Index, which has returned 62% YTD in USD terms, with 23.8% of this return attributable to the appreciation of the Brazilian Real. The economy experienced a third consecutive quarter of declines in 2016, meaning that this year’s GDP will follow last year’s pattern of negative growth, as the I.M.F. projects 2016 GDP at -3.3%. Nonetheless, the country’s President continues on the path of structural reform, as its Senate on December 13th approved a spending cap that will limit public spending. The Central Bank has simultaneously begun to introduce monetary easing, as it cut interest rates by 25 basis points on November 30th, bringing the rate to 13.75%. Like most emerging markets, the economy will be impacted when the policies of the President-Elect in the U.S. begin to unfold.

The region’s second largest economy, Mexico, felt the biggest impact of the U.S. elections, with the MEXBOL Index falling 13% since the results were confirmed. The U.S. President-Elect has been very open about policies with regards to Mexico, and has even suggested implementing a tariff of 35% on imports. The negative impact on the equity market has been exacerbated by a weakening Mexican Peso, which has since declined 10.4%.

Asia markets have been somewhat mixed in 2016 thus far. Japanese equity markets, for example, have advanced 5.21% YTD. This is stark contrast to market performance in China. After starting the year on a high at 3539, the Shanghai Exchange Composite Index declined to its low on January 28th of 2655 (-25%). Currently, the index stands at 3140, representing YTD (USD) returns of -17.6%. China’s economy is set to maintain rapid growth of 6.7% in 2016. However, market fears surrounding the Chinese Yuan continue to be driven by pressure on China’s Foreign Exchange reserves. After falling 13% in 2015, reserves fell a further 8.3% in 2016 to US$ 3.05 trillion, leaving investors to speculate whether the currency will depreciate further.

The situation in India differed somewhat. The Sensex stood at 26,117 at the beginning of the year and peaked on November 8th at 29045 (11%). Currently the index stands at 26602, returning 1.9% YTD in local terms. However, the index remained relatively flat when measured in USD.

On November 8th 2016, India’s Prime Minister announced the demonetization of 500 and 1000 Rupee notes, in an attempt to reduce counterfeit currency, ‘black money’ and deter terrorist financing. It is widely viewed that this measure will be beneficial in the long run, but will have negative short term impacts. As a result of this policy and the effect of US presidential elections and US interest rate policies, the index fell 8.4%.

The best performing market in the Asia/Pacific region was the TAIEX Index of Taiwan, which returned 15.6% YTD (USD).

With 2016 beginning to fade into the rear view mirrors of most international investors’ portfolios, the all-important question arises, ‘how should I be positioned for the year ahead?’ As in 2016, some key market-moving themes will continue to prevail. The official assumption to the position of the US presidency is likely influence markets in 2017, as President-elect Trump’s policies and initiatives become clearer. US interest rate policy will also impact both developed and emerging equity performance, with the path of rates hikes weighing on investor expectations for global growth, currency movements and commodity prices. 2017 is also setting up to be another year in which oil prices drive market sentiment, again related to global growth sentiment.

Looking ahead, the overall views on equity markets range between neutral to positive, stemming from moderate economic growth in the global economy. In the U.S., analysts expect the S&P500 to advance between 3% to 5%. Generally, there has been a rotation from bonds to equities since the results of the U.S. elections, even in the wake of an increase in U.S. interest rates.

In the Asian region, major investment houses expect the Japanese market to perform well, in light of the Japanese Yen falling compared to the U.S. dollar. There continues to be mixed views concerning Europe, as various political events are set to unfold in the short term. Finally, with regards to emerging markets, analysts remain moderate on market performance, given political uncertainties coupled with a stronger U.S. dollar.

With increased uncertainty in some markets, conservative investors may shy away from equities and opt for less volatile returns via local USD money market mutual funds. This provides investors with the dual benefit of capital preservation coupled with modest returns. It should also be noted that these funds provide investors with more attractive returns than those provided in local US$ bank deposits.

With a few weeks to go, international equity markets could well present a few more surprises before the year’s end. As always, Bourse re-emphases its long-term investing themes of (i) Lengthening your investment horizon, (ii) targeting positive inflation-adjusted returns, (iii) diversify by asset class, (iv) diversify by geography and (v) diversify by currency.