This week, we at Bourse discuss the Year End results of Scotiabank Trinidad and Tobago Limited (SBTT) and First Caribbean International Bank (FCI). Both stocks have posted commendable full-year results, despite an increasingly difficult operating environment. We take a moment to review their respective performances and provide some perspective on future performance.

Like most other businesses, SBTT will confront the effects of lower economic activity in 2017. As recessionary pressures mount, consumers may use more caution as it relates to loans. For SBTT, the firm may focus on improving its expense management, keeping a keen watch over loan losses and searching for efficiency gains. Corporate Taxation changes in 2017 will also weigh on SBTT like all the companies in Trinidad & Tobago. Specifically, the marginal income tax rate of 30% on all profits over $1M will decrease profit after tax and by extension could lead to a decline in earnings per share.

At a price of $58.69, SBTT trades at a trailing P/E of 16.6x, marginally above the sector average of 14.4x. Shareholders will welcome the special dividend payment for the 2nd year running, while the trailing dividend yield (based on regular dividends) stands at 3.4%. While this falls below the sector average of 3.9%, the trailing dividend yield combined with the special dividend would translate into 5.1%. On the basis of good dividend yield, but tempered by the effects of subdued economic activity and new taxation measures, Bourse maintains a NEUTRAL rating on SBTT. 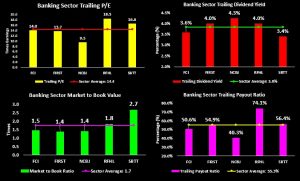 FCI’s revenue is not expected to be significantly impacted from lower economic activity in Trinidad and Tobago, given that just 2% of its revenue comes from T&T. However, the bank’s major markets of Barbados and Bahamas are expected to grow at sluggish rates of 1% and 1.7% respectively in 2017, according to the IMF. For the Trinidad & Tobago investor, FCI offers considerable value being a TT dollar denominated investment which provides US dollar cash flows in the form of dividends. 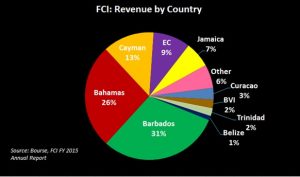 At a current price of $8.50, FCI trades at a trailing P/E of 14 times, just under the sector average of 14.4 times. In addition, the stock offers investors a reasonable dividend yield of 3.6%, with a trailing payout ratio of 50.6%. It should be noted that the stock has appreciated approximately 70% for the year, reflecting investors’ positive sentiments. Given the firm’s low exposure to Trinidad and Tobago, moderate valuation and dividend payments in US dollars, Bourse maintains a BUY rating on FCI. 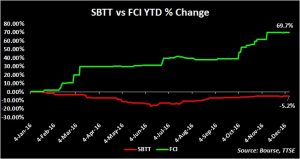 The government of Trinidad and Tobago announced its first public TT dollar bond issue for fiscal 2016/2017. The TT$500 million issue offers investors a coupon rate of 3.80%, maturing on December 19, 2022. The 6-year bond will be issued through the Central Bank via an auction system. Investors interested in submitting bids can contact a listed government securities intermediary for more information. Though the auction will close at 1:00 pm on Thursday December 15, 2016, applications for non-competitive bids will be accepted up to 12:00 noon on Tuesday December 13, 2016.

The auction is likely to be well received given the paucity of fixed income investment options in TT dollars, combined with the persistent excess liquidity overhang.