As we get the ball rolling in 2017, this week we at Bourse review the performance of the local equity market. We take a closer look at the three stock indices, namely the Trinidad and Tobago Composite Index (TTCI), the All T&T Index (All T&T) and the Cross Listed Index (CLX), as well as highlight the major movers of the various indices. Finally, we take a look at some key market drivers for the upcoming year. 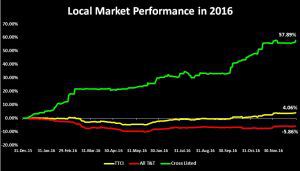 The Trinidad and Tobago Composite Index (TTCI) – which comprises both locally listed and cross-listed stocks – managed to advance 4.06% in 2016 despite challenging circumstances in the Trinidad & Tobago economy. A closer look at this performance, however, reveals that the advance was driven primarily by the positive returns of the Cross Listed Index (CLX), which managed to more than offset the decline produced by the All T&T Index (All T&T). By market capitalization, the CLX securities account for around 23% of the TTCI, with the remainder attributable to the All T&T.

Overall in 2016, 12 securities advanced, 13 declined and 4 remained flat (inclusive of the Clico Investment Fund or CIF). Trading activity on the market portrayed conflicting stories. The total value traded (inclusive of mutual funds) declined 22.3% in 2016 from TT$ 1,499 million to TT$ 1,164 million. However, the total volume traded increased 9.1% over the same period from 93.6 million to 102.2 million. Securities with higher per-share prices such as AMCL and TTNGL saw a decline in trading volume of 0.7 million and 8.9 million shares respectively. On the other hand, securities with relatively lower prices like FirstCaribbean International Bank (FCI), JMMB Group Limited (JMMBGL) and National Commercial Bank Jamaica (NCBJ) all saw increases in volume traded by 2 million, 11 million and 6.6 million respectively. This combined effect led to the decrease in traded value and increase in traded volumes.

The Cross Listed Index returned 57.9% in 2016, following a 18.7% performance in 2015. Returns in the cross-listed space would have been driven by several factors, including (i) generally lower valuations when compared to All T&T stocks, (ii) cross-listed companies having lower exposure to the Trinidad & Tobago economy, (iii) several cross-listed stocks generating/reporting earnings in US dollars and in some cases paying dividends in US dollars, providing investors with an implicit and/or explicit hedge against TT dollar depreciation. Notably, the improving economic situation in Jamaica contributed to better company performance in the case of most cross-listed stocks as well as higher investor confidence, filtering through to price advances. In the case of other cross-listed companies such as FCI and SFC, corporate performance and other factors outweighed concerns of any economic lethargy in the stocks’ major operating jurisdictions.

Impressively, every stock on the CLX advanced in 2016. GraceKennedy Limited (GKC) saw the largest gain of 97.8% in 2016, with improving performance and its three-for-one stock split appealing to investors. FirstCaribbean International Bank (FCI) advanced 69.7% Sagicor Financial Corporation (SFC) saw the ‘smallest’ increase in the index of 24.7%. Other stocks like JMMBGL (up 63.6%), NCBJ (up 42.9%) and Scotia Investments Jamaica Limited (SIJL, up 34%) benefitted from P/E multiples expansion, which pushed prices upward.

The All T&T Index declined 5.86% in 2016, on the heels of a -1.7% move in 2015. In contrast to the cross-listed stocks, companies on the all T&T Index had to contend with lower investor confidence on account of higher exposure to a weaker Trinidad & Tobago economy, a depreciating TT dollar and access to currency for business purposes and new fiscal measures which could affect consumer demand and corporate taxation levels. Despite these challenges, there were a few bright spots in terms of performers. Trinidad Cement Ltd improved 10.3%, on account of CEMEX’s “Offer and Take-Over Bid” at a price of $4.50. Prestige Holdings Ltd and Angostura Holdings Ltd both increased by 8.9% and 7.4% respectively. In terms of stocks declining, National Enterprises Limited (NEL) slipped 34.9%, followed by Massy Holdings Limited (MASSY) which was down 15.4%. Other major declines included National Flour Mills (NFM) down 6.7%, One Caribbean Media (OCM) down 9.5% and Unilever Caribbean (UCL) down 12.4%.

Looking ahead, one of the major influences in 2017 for stocks on the All T&T index will be the impact of a new marginal tax rate of 30% (from the previous 25%) on companies’ earnings in excess of TT$ 1 million per year. This should weigh on after-tax income of most listed companies.

Consumer confidence and spending is expected to remain muted as recessionary conditions persist and the unemployment rate increases. Local economists project a decline in real GDP of 2% this year, which could have far-reaching consequences across all sectors. The banking sector for example, could see slower loan growth while Conglomerates may also feel the effect of lower economic activity in its discretionary purchases such as vehicles.

Although oil prices have doubled since reaching its lows in February 2016 (WTI Crude is around US$53.76 per barrel), it is still 50% lower than its 2014 levels. Given the recent agreement by OPEC and non-OPEC countries to cut production, prices are expected to benefit from some stability in the near term. However, it may take some time before any recovery is filtered into the local economy. On a more positive note, production of natural gas is forecast to improve in the near-term, after declining 6% during January to October 2016 when compared to the same period in 2015. The Angostura Phase 3 oil and gas field, Sercan gas field, Juniper and Angelin are all expected to contribute to improved gas supply gas in the coming months/years.

For the first 6 months of 2016, total imports have declined 6.5% when compared to the prior year. This was on the heels of a 19.2% fall in 2015. With continued challenges in the access to foreign exchange, total imports and headwinds to consumer activity, imports could continue on a downward trend. This could weigh on the corporate performance of several listed companies involved in manufacturing and distribution.

With the above drivers in mind, it would appear that the equity market is set for an uncertain performance in 2017 as investor confidence is influenced by developments in the economy. In a subsequent article, we shall provide more details on our outlook for 2017 by Sector. As always, investors should consult a trusted and experienced advisor, such as Bourse, to help make better-informed investment decisions.