Budget day is finally here. In what could be one of the most impactful moments for the Trinidad & Tobago economy in recent times, this week, we at Bourse consider the potential investor implications and opportunities which could arise as the state looks to fund a highly likely deficit in the fiscal year ahead (FY2021). Could bonds become increasingly available? Could state-owned/controlled assets be sold to the public? Could new revenue collection initiatives affect consumer demand and companies’ financial performance? We discuss below.

At a special pre-budget conference on September 28th, the Honourable Prime Minister, Minister of Finance and other key personnel laid bare the economic realities confronting the Trinidad & Tobago economy. The main points which will likely guide the FY2021 budget included:

Within this context, it is quite likely that FY2021 will produce another significant budget deficit. To fund the deficit, several options remains available to the State, including (i) drawdowns from the Heritage and Stabilization Fund (the HSF), (ii) Borrowing through bond and other debt issuance and (iii) the sale of State Assets. The selected combination of deficit funding could produce several investor opportunities, potentially sparking a mobilization of investor capital in T&T.

Drawing on the HSF

The HSF remains a source of funding in bridging fiscal gaps during periods of revenue downturn. Even with withdrawals of approximately US$980Mn for FY2020 (up to 28th August), the HSF’s value has remained close to US$5.8Bn, benefitting from a recovery in financial markets.

The Miscellaneous Provisions (Heritage and Stabilization Fund, Government Savings Bonds and Value Added Tax) Bill was amended in March 2020 to allow for the withdrawal of up to US$1.5Bn from the HSF in a fiscal year, providing much needed access to national savings under the current circumstances. It should be noted, however, that the resources of the HSF are finite: drawdowns are unlikely to be a sustainable approach to funding persistent budget deficits.

As at June 2020, Net Public Sector Debt amounted to TT$119.3B, comprising of Central Government Domestic Debt (TT$68.4Bn), Central Government External Debt (TT$32.0Bn) and Contingent Debt as well as BOLTs and Leases (TT$18.9Bn). Net Public Sector Debt to GDP rose to a multiyear high of 71% of GDP (June 2020). At the Pre-Budget Conference, the Minister of Finance estimated that T&T’s Debt to GDP would reach 77% at the end of FY 2020.

Within FY2020, the 10-Year cost of domestic borrowing locally narrowly ranged from 4.4% to 4.6%, as reductions in Primary Reserve Requirements and subdued inflation have led to fairly stable and affordable borrowing costs for GORTT. Internationally, T&T’s usually stable borrowing costs were subject to COVID19-related significant volatility, with 10-Year implied borrowing costs reaching as high as 8.2% in March 2020, from a low of 3.6% in February 2020. Nevertheless, low US interest rates and accommodative monetary policies have created a very supportive environment for USD bond issuers – including Trinidad & Tobago – as evidenced by recently oversubscribed US$500M 4.50% June 2030 T&T bond issuance.

In March 2020, the Central Bank implemented a cut to the primary reserve requirement from 17% to 14%, prompting an increase in Commercial Bank’s Excess Reserves in order to stimulate borrowing and economic activity. In the month of February Excess Reserves stood at $3.29B, persistently growing in subsequent months to a multiyear high of $11.6B in August. The build-up of excess liquidity in the financial system is likely to facilitate increased government borrowing, without significantly disrupting interest rates.

Debt to GDP Relative in Context 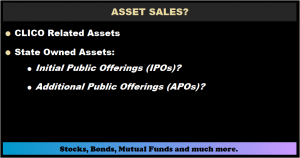 Capital Revenue’s contribution to Total Revenue has averaged approximately 2% in the last three fiscal years. However, with a sizable asset base consisting of equity holdings in almost 50 enterprises, the government of Trinidad and Tobago could look to asset sales to raise revenue, or the collateralisation of assets for debt issuances. At the end of fiscal 2019 divestment initiatives continued for the following enterprises:

In September 2019, Patriotic Energies and Technologies Company was selected as the preferred bidders in the sale of the Guaracara Refining Company Limited. To date, the transaction has not been completed.

In addition to Private transactions, there is the increasing possibility for Initial Public Offerings (IPOs) and Additional Public Offerings (APOs) of state-owned assets. According to the State Enterprises Investment Program 2020, for example, the Home Mortgage Bank and The Trinidad and Tobago Mortgage Finance Company are in pursuit of a merger with the aim of forming a singular entity Trinidad and Tobago Mortgage Bank (TTMB). This could potentially present an opportunity for a future stock market listing.

Being an economy heavily dependent on energy income, Trinidad and Tobago recently faced scrutiny from credit rating agencies with regards to its ability to meet debt obligations. The decline in revenue, leading to the subsequent increases in debt reliance could prompt additional rating actions by relevant agencies in subsequent review periods. Currently, T&T’s credit rating is just within investment grade of BBB- by Standard & Poor’s. With any credit rating downgrade, the possibility of increased borrowing costs on the international market could result. The issuance of debt through financial markets could improve the supply of bonds available to investors, improving access to investment opportunities.

With Asset Sales continuing to be a potential source of financing for the budgetary gap, there exists potential for new listings on the domestic stock exchange. The Government has historically been successful in its public listing of enterprises, in the past 5 years having launched an Initial and Additional Public Offering of Trinidad and Tobago NGL and an Additional Public Offering of FIRST shares. Public listings typically pique the interest of investors, especially with attractive value propositions.

Sharply reduced expenditure by the state could lend to a contraction of the fiscal gap in the new fiscal year. Similarly, more aggressive revenue collection by the sovereign such as the implementation of the Revenue Authority and deployment of new or increased taxes will contribute to a smaller deficit. However, both these methods are likely to lead to negative economic consequences under current conditions. With more taxes leading to a decline in disposable income for consumers, the impact on demand will have knock on effects on corporate profitability, stock market performance and investor confidence. Given current conditions decreased spending is likely to exacerbate the economic burden on some economic agents.

As we enter the new fiscal year, we wish the Honourable Minister of Finance the best in delivering the FY2021 Budget.