With the FY2021 Budget now delivered, this week we at Bourse consider the ‘Pros’ and ‘Cons’ from the perspective of the investor. Several proposed fiscal measures could have significant and far-reaching effects on many facets of the Trinidad & Tobago economy, which we summarize below. 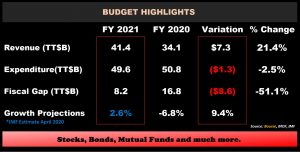 Borrowing Anticipated, Assets to be Sold

Further to guidance from the FY2021 budget, financing for the projected deficit is expected to rely on debt, potentially through domestic and/or international sources. The Sale of Assets through privatization of the Port Authority of Trinidad and Tobago and the sale of all (approximately 60) gas stations owned by the Trinidad and Tobago National Petroleum Marketing Company Limited (NP), is also being pursued. No mention was made of drawdowns from the Heritage and Stabilization Fund (HSF), but the Fund remains as a source of funding if necessary.

Incentives for new listings on the Small and Medium Enterprise (SME) Market Tier of the Trinidad and Tobago Stock Exchange were proposed. Expected to be introduced on the 1st of January, 2021, the initiatives include a full tax holiday for the first five years of listing on the TTSE and a 50% tax holiday for the following five years post listing.

Current economic conditions may present a challenge to the stimulation of new listings in the short term. With lower business performance and muted investor confidence being symptomatic of the current economic environment, listing success in the short run would require compelling valuations and/or ‘recession-proof’ business models to attract investors.

The Minister of Finance (MoF) announced the imposition of a 30% reduction to existing quotas for used car dealers. The measure will come into effect in January, with a quota for the importation of new cars is also expected in January 2021.

The second measure imposed on the vehicle industry is the removal of all tax concessions on the importation of private motor vehicles. Massy Holdings Limited (MASSY) in its most recent quarter saw 18.8% of its Profit Before Tax being contributed by its Motor and Machinery segment. Ansa McAl Limited’s (AMCL) Automobile, Distribution and Trading segment accounts for 54.4% of its Profit Before Tax. With private motor vehicles comprising roughly 67% of total new vehicle sales, the removal of tax concessions could potentially weigh on the performance of these publicly listed companies. It should be noted however, that both MASSY and AMCL’s automotive sales would comprise non-private units and/or have geographically diversified markets.

Effective 1st of January, 2021, Personal Income Tax Allowance has now been increased from $72,000 to $84,000 annually. The measure is expected to benefit 250,000 individual taxpayers with additional income of $250 per month. The move, expected to cost the Government roughly $750M per year in tax collections, is being made with the belief that extra spending power could stimulate the economy beyond the expected tax loss.

However, this benefit could be offset by the cost of living impact of other initiatives.

In attempt to curb expenditure and narrow its fiscal deficit gap, the MoF announced the removal of all remaining subsidies in the domestic sale of liquid petroleum products. Resultantly, the retail prices of premium gasoline, super gasoline, diesel and kerosene will move from a fixed to a floating basis.

The crucial factor in determining fuel pricing is supplier behaviour. Under a competitive scenario with (i) a large number of independent station owners, (ii) maximum allowable margins regulated by the government and (iii) price-based competition, the likely outcome would be a fuel market with fair pricing to consumers and an industry which earns, in economic terms, normal profits. The inevitable inflationary pressures brought about by the removal of fuel subsidies would be more manageable.

In a less-competitive scenario of (i) a small number of dealers, or oligopoly, owning large parts of the station network, (ii) no regulations on margins (as is currently suggested) and (iii) the potential for coordination among dealers (informal, ‘cartel-like’ behaviour), pricing could vary widely from USGC levels. In this scenario, the likelihood for absolute higher fuel prices, regardless of USGC prices, could lead to more significant inflationary pressure across the economy.

Property taxes for Residential properties are expected to be introduced in FY2021, with the expected revenue boost to the state still unclear. While concerns remain about the process in determining Annual Rental Value (ARV), the general rule of thumb applies; higher-value properties should attract higher rental income. However similar to utility rate revisions, the introduction of the Property Tax, regardless of how small, could have the effect of reducing disposable consumer income.

Water and Electricity Tariffs to be Reviewed

The MoF announced a review of the operations of the Water and Sewage Authority (WASA), which includes a tariff review. The report, due November 30th 2020, could bring higher costs of water to residents and businesses alike, given the current annual $2 billion subsidy to WASA, as well as the entity’s “unsustainable” debt position.

A review of water rates across the Caribbean, based on a 2018 report (of 2015 prices) by the Regulatory Industry Commission (RIC), revealed that T&T paid US$0.27/m3 of water, roughly 80% below the average cost of water (US$1.35/m3) in Caribbean neighbours Barbados and Jamaica.

Like WASA, the MoF signaled a review of tariffs for electricity supply, indicating that an increase in rates for nearly 500,000 customers was likely. Available data shows that T&T’s energy cost is currently US$0.05/kwh, 80% lower than the average cost of US$0.28/kwh in Caribbean peers including Bahamas, Barbados and Jamaica. A 2017 publication estimated the full-cost of electricity in T&T to be in the range of US$0.12/kwh. Based on these estimates, electricity tariffs could potentially double, should the elimination of the power subsidy be targeted.

With the proposed fiscal measures and other initiatives, investors should consider the likelihood of:

While the measures proposed were broadly less-intense than expected by most observers, the economy’s response will determine what adjustment – positive or negative – may be required in the coming months.