Pre-Budget Review – Can Expenditure Be Adjusted?

This week, we at Bourse review the expenditure side of the budget equation in the second instalment of our series focused on the FY2020/2021 National Budget scheduled for October 05th 2020. Unlike the substantial swings experienced with Revenue, Expenditure has remained relatively unchanged over the past several fiscal years, despite some attempts at moderation. With the decline in Revenue forecast for FY2019/2020 and the likely Revenue challenges in FY2020/2021, is there scope to make adjustments to the Expenditure configuration of Trinidad & Tobago’s budget?  If so, what could be the likely impact on the economy? We discuss below. 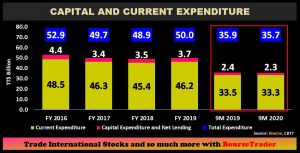 Despite hitting close to TT$60 Billion in FY2015, Government expenditure has remained around the $50.0B range from FY2016 to FY2019. Initial projections in the FY2020 budget suggested a 6.1% increase in Total Expenditure to $53.0B. Even with the enforced reallocation of expenditure as a result of COVID-19, Total Expenditure for the soon-to-be-concluded FY2020 is still expected to be in the vicinity of $53.1B.

Total Expenditure is comprised of two broad components. Current Expenditure, which includes annual operating expenses and other ‘routine’ costs, typically do not have any tangible asset or property to show for the money spent. Capital Expenditure on the other hand, is usually focused on increasing tangible assets; building road infrastructure, industrial plants etc. which can be monetized at a later date if required. 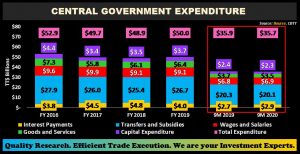 Taking a more detailed look at expenditure patterns, Transfer and Subsidies have accounted for an average 53% of Total Expenditure between FY2016-FY2019. Wages and Salaries were the second highest spend, comprising roughly one fifth of Total Expenditure. In the first nine months of fiscal 2020, Wages and Salaries amounted to $6.9B, marginally higher at 1.9% than $6.8M reported in the prior comparable period.

Spending on Goods and Services contributed 10% of Total Expenditure in 9M 2020, relative to a 14% average. Between the period October 2019 to June 2020, Expenses incurred from Goods and Services declined 6.5% from a year ago. Interest Payments rose 8.3% in 9M fiscal 2020, compared to the year ago period, bringing its expenditure weighting to 8% in line with that of the prior year. With increasing debt issuance likely required to finance the widening fiscal gap, increases in Interest Payments are likely to result.

A Closer Look at Transfers and Subsidies

Can Expenditure Be Adjusted?

Trinidad and Tobago reported its last budget surplus in FY2010 of $188M. Since then, the budget has been run in deficit; spending being greater than what was earned.

With FY2020 expected to produce the largest fiscal deficit on record and FY2021 likely to be similarly challenged, a careful review of expenditure may be required. 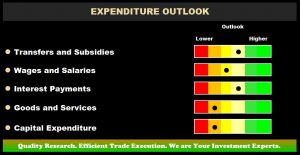 At a glance, reducing spending meaningfully may not be achievable without the pain of changes being felt by all stakeholders in the national economy.

Currently, over 50% of budgeted expenditure is allocated to Transfers and Subsidies, a category consisting of payments to state enterprises and towards individual wellbeing. Prevailing economic conditions have prompted the introduction of temporary relief grants and other measures, further increasing the weighting of Transfers and Subsidies and social spending. Cuts in this area are likely to be felt significantly by the most financially vulnerable members of society.

At the same time, infrastructure and capital expenditure cannot be forgone. Already accounting for less than 10% of overall expenditure, investment in assets to promote economic activity and/or generate additional revenues are essential to building economic resilience. Against the current backdrop of constrained revenues, Capital Expenditure programs are likely to come under increased scrutiny, to ensure the best allocation of financial resources.

Significant reductions to Current Expenditure could result in adverse economic consequences in the short-term, with a gradual and well-articulated adjustment period more likely to be successful to righting the budget imbalance while not shocking the economy. With the economy already facing the burdens of reduced production, demand and consumer spending, government spending will play a key role in supporting overall activity. In this context, expenditure cuts may have to be undertaken in stages, with reliance placed on sales of State assets, drawdowns from the Heritage and Stabilization Fund and Increased Borrowings to fund whatever deficits may be encountered.

With a perspective of both the revenue and expenditure outlook for FY2021, next week we discuss the potential implications for investors in the last of our 3-part series. 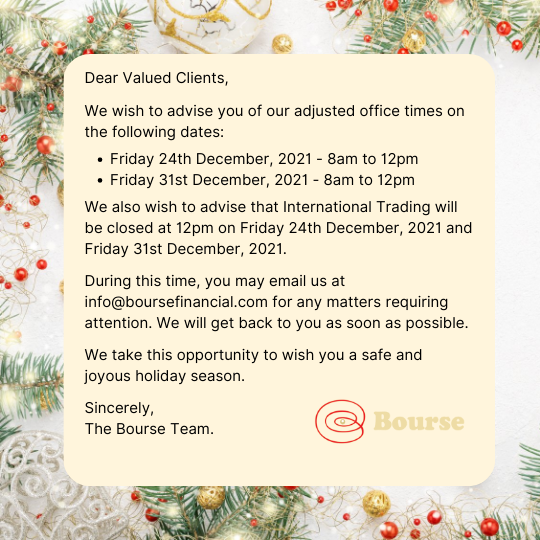