This week we at Bourse take a closer look at the performance of international equity markets year-to-date (YTD). Most major markets across the globe traded in the green, with some indices reaching record highs. We highlight key market drivers and suggest ways by which investors can benefit from these gains.

Overall, global economic activity is strengthening, with GDP growth projected to rise to 3.6% in 2017 and 3.7% in 2018 as per the IMF. Growth for Japan, Asia, Europe and Russia have recently been revised upwards, offsetting the downward revision of USA and the UK. Commodity exporters, particularly fuel exporters, continue to be hit hard by sharp declines in foreign earnings. As the search for returns intensifies, investors may look beyond their traditional playing fields into more risky areas. 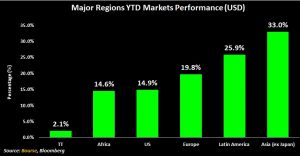 The US economy has continued on its growth trajectory throughout 2017, as inflation (CPI) remained contained at 1.7% year-on-year as at September 2017, slowly approaching the Federal Reserve’s 2% target. With unemployment falling to 4.2% in September, (16-year low), and consumer sentiment at a 13-year high, market participants have responded positively. The US equity market – represented by the S&P500 Index – climbed to its all-time high of 2572 on October 20th. The YTD return currently stands at 14.9%.

This year’s improvements contrast sharply to early 2016, when US stock markets declined 10.5% in February, amidst concerns of the U.S. economy related to a slowdown in China and Europe. While the Federal Reserve has raised its benchmark interest rate twice this year, rates on long-term bonds are still low. That means companies can still capitalize on relatively inexpensive borrowing. 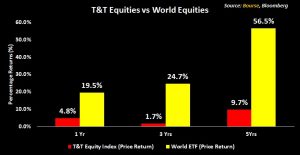 Investors who ventured into international equity markets in recent times would have fared better than the local equity market. Using a broad based exchange traded fund (ETF) as an example, (USD) returns (excluding dividends) on a five-year basis would have been 56.5%. In contrast, the local equity market would have provided (USD) returns (excluding dividends) of 9.7%. Investors, however, should be aware of the local economic and political risks, tax laws as well as currency market trends before investing. Conservative to moderate investors can take the mutual fund route instead of directly taking exposure to US securities. 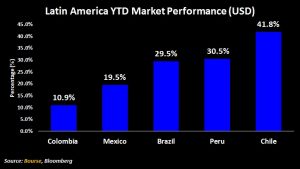 The Latin American market has returned 25.9% YTD. Most major markets in Latin America have provided investors with double-digit returns in USD terms. Investors would have benefited both from market advances and strengthening currencies in the regions. Chile was up 41.8% YTD in USD, followed by Peru (30.5%) and Brazil (29.5%). 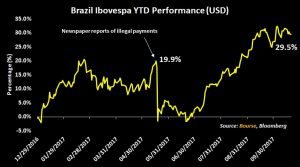 Brazil’s economy has continued to creep out of its longest recession, recording real GDP growth of 1.0% quarter on quarter in the first quarter of 2017, the first positive reading since December 2014. This was followed by 0.25% growth in the second quarter. Investors have responded positively to GDP growth, as well as proposed structural reforms (pension reforms, etc.) which are aimed at reducing the nation’s ballooning fiscal debt. The Ibovespa Index has climbed 29.5% YTD, hovering at record highs.

As at May 16th, Brazil’s Ibovespa index returned 19.9% (USD). On May 18th, the Brazilian market fell by more than 10% in local terms and approximately 18% in USD terms, following news that the country’s President allegedly approved illegal payments to silence a former house speaker. A Federal Prosecutor eventually charged the President with corruption, which has been dismissed.

Investors seeking access to the Latin American markets may do so through one of the various mutual funds available, such as the Bourse Brazil Latin Fund (managed by Bourse) among others. 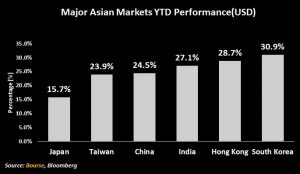 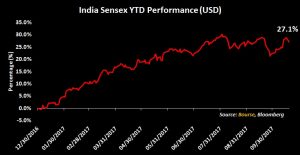 The Indian equity market has marched ahead steadily throughout 2017. Investors have welcomed policy tax reforms through the new Goods and Services Tax (GST), as it signals government’s intention to continue creating required policy environment for boosting economic growth. The Indian Rupee has appreciated 4.3% YTD against the USD. The Reserve Bank of India lowered its growth forecast for FY2018 to 6.7% from 7.3%, after Q1 2018 GDP amounted to 5.7% (below estimates). Nonetheless, India remains one of the fastest growing economies and presents an attractive opportunity for investors in search of capital appreciation. Investors can gain exposure to this market through one of the available mutual funds, such as the Savinvest India Asia Fund (managed by Bourse) among others.

With the above in mind, investors may be wondering how they can capitalize on maximising returns on their US dollars. With USD bank deposit rates locally hovering around 0.1% for some time, it may be more beneficial to invest in USD investment income (money market) mutual funds or USD equity mutual funds, depending on risk tolerance. 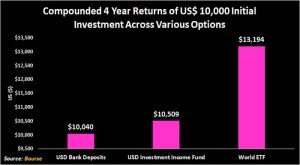 More information on an outlook for 2018 and beyond will be given in a subsequent article. Investors are encouraged to consult a trusted and experienced advisor, such as Bourse, to make a more informed investment decision.