This week, we at Bourse evaluate the impact of potentially lower dividend payments by Republic Financial Holdings Limited (RFHL) on two related investments; the CLICO Investment Fund (CIF) and the National Investment Fund (NIF) series of bonds. With both the NIF and CIF dependent on RFHL dividend payments to service coupon payments and pay distributions respectively, continued lower RFHL dividends could affect investor confidence in the associated investments.

The CIF and NIF are significant shareholders of RFHL. Since its formation in 2012, the CIF has held 40,072,299 RFHL shares representing approximately 24.6% of RHFL’s total shares outstanding. In similar fashion, the NIF holds 42,465,352 million shares of RFHL as part of a portfolio of securities. The portfolio is intended to (i) collateralize TT$4 billion of bonds issued in August 2018 across three series (A to C) and (ii) generate cash flows sufficient to service the bonds’ coupon payments and most/all eventual principal repayment. Collectively, the CIF and NIF account for 50.6% of RHFL’s shareholding.

Dividends Cut Across All Sectors

The cut in dividends experienced by RFHL shareholders is not unique. Significant initial uncertainty and subsequent reduced economic activity have resulted in many companies reducing or temporarily eliminating dividends in 2020 thus far. A simplified look at the 1st Tier market of the Trinidad & Tobago Stock Exchange (TTSE) highlights the cautious approach adopted by most publicly listed companies. An investor holding one of each share listed on the 1st Tier would have received $10.98 in dividends as at the end of October 2020. This was 42.1% lower than the $18.96 paid during the comparable period in 2019. 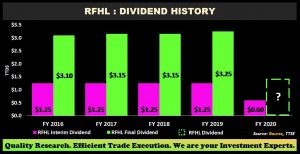 RFHL’s interim dividend payment in May 2020 was cut by 52% from its prior level of $1.25 to $0.60 per share. The move was as a result of a 30.8% Year on Year (YoY) decrease in its Earning Per Share at the half-year mark. In its most recently released financials (9M 2020), RFHL reported an EPS of $4.75, 37.4% lower than prior comparable period. Without any (i) significant improvement in earnings and/or (ii) changes to its usually stable dividend policy (averaging a payout ratio of 58% over 2016-2019), RFHL’s final dividend could also decline. For illustrative purposes, were RFHL’s final dividend payment to be cut by the same proportion as its interim payment, shareholders would receive a dividend of around $1.70. It should be reiterated that several factors, including the aforementioned, would determine the size of RFHL’s final dividend.

Are CIF Dividends at Risk?

For the 2019 financial year, an estimated 86.7% of dividends paid by CIF were attributable to dividends received from its shares in RFHL. Understandably, changes to RFHL dividend payments would affect CIF dividends to its unitholders. RFHL’s interim dividend reduction ultimately resulted in CIF’s interim payment to unitholders being cut to $0.21, 36% lower than the $0.33 previously paid. The anticipated cut in dividends may be one reason for the fall in the price of the CIF, which has declined 11.6% year-to-date.  In contrast, RFHL shares – which account for approximately 90.1% of CIF’s Net Asset Value – have advanced 8.2% YTD. To put into context, the TT Composite Index has declined 10.9%, suggesting investors remain confident in RFHL’s longer-term prospects.

Benefitting from RFHL’s performance, the NAV of the CIF has advanced 4.6% YTD, to stand at $30.96, while CIF itself trades at a market price of $25.20. Changes in the NAV and traded price of CIF have led to a widening between the market and fund’s underlying value, equivalent to an 18.6% discount relative to the fund’s underlying value. Over the past 12 months, the discount would have narrowed to as little as 3.6% (December 2019). Notwithstanding the short-term reduction to its distributions, CIF appears to be offering relatively more attractive value for the medium-term investor.

Could NIF coupons be affected?

Accounting for just over 63% of the estimated value of assets held by the NIF as at October 2020, RFHL is also one of the major contributors to cash flows needed to service coupon payments. 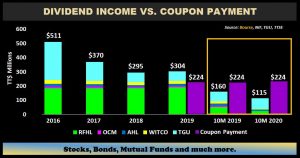 In the event of substantially weaker RFHL dividend payments, NIF may in the short-term have to rely more heavily on income from Trinidad Generation Unlimited and a Bond Interest Payment Reserve, as stated on the company’s financial statements. 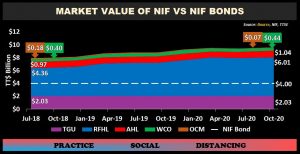 NIF’s investment portfolio has benefitted from an appreciation of RFHL shares, which have gained 37.7% since the inception of the fund in July 2018.

Since issuance, the market value of NIF’s investment portfolio has appreciated 20.8% to an estimated TT$9.6B, buoyed by increases in the market value of its underlying holdings. At present, the value of NIF’s portfolio is an estimated 2.4 times the outstanding value of debt issued by the NIF. The weighting of RFHL has considerably increased from 55% at issuance to 63% currently, reflective of the increase in the stock’s market value. Trinidad Generation Unlimited (TGU), which is solely owned by the NIF carries an estimated weighting of 21%, while the Angostura Holdings Limited (AHL), West Indian Tobacco Company (WCO) and One Caribbean Media (OCM) portion of the portfolio is currently 11%, 5%, 1% respectively.

Investors’ main concerns with NIF bonds would be whether their income or principal could be at risk. Despite likely lower expected dividend income from RFHL, NIF should still be able to comfortably support their coupon payments as usual. With respect to principal repayments at maturity, the NIF’s increasing portfolio value suggests a very minimal risk of repayment difficulties. As stated in its prospectus the NIF does maintain a sinking fund, established to accumulate funds for principal repayment, with such funds intended to be invested in high quality fixed income instruments.

Similar to the NIF, the CIF is likely to face some short-term cash flow pressures arising from economic headwinds faced by RFHL and potential reductions in dividends. In the current environment, CIF might represent good value for investors with a medium-term time horizon. The prospect of normalization of RFHL earnings and dividends, should economic conditions improve, is made more attractive by effectively acquiring RFHL shares at a discount through the purchase of CIF units.