S&P downgraded the credit rating of the Government of Trinidad and Tobago by one ‘notch’ to BBB from BBB+ (July 9th, 2019), on account of lower-than-expected energy production and economic growth, slow implementation of institutional reforms and lack of improvements in timely data collection. While the downgrade will like dent investor confidence, S&P’s rating of T&T still remains in Investment Grade territory. S&P’s Outlook for T&T was changed from negative to stable, based on the country’s liquid financial assets in the Heritage and Stabilization Fund (HSF) and the expectation of a small increase in energy production, which could support an increase in economic growth.

Moody’s Investor Services (Moody’s) affirmed the credit rating of T&T as Ba1 (June 26th, 2019), on account of T&T’s sovereign wealth fund (HSF), projected economic recovery of between 1.5% to 2.5% in 2019-2020 and a low susceptibility to external financing risk based on the country’s high foreign reserves. Despite being affirmed at Ba1, Moody’s rating places T&T in the non-investment grade or ‘junk’ category of bonds. The outlook for T&T by Moody’s was maintained at stable.

Both S&P and Moody’s made mention of the very comfortable level of international reserves and the value of the HSF in the rating reviews. Indeed, the HSF and International Reserves were supportive factors to T&T’s credit ratings.

With respect to the HSF, the most recent value of the Fund was US$6.2 billion at July 2019 according to the Ministry of Finance. This was an increase of US$0.23 billion (3.8%) from September 2018 to date and US$0.54 billion (9.5%) higher since September 2015. The growth of the HSF has been attributable in large part to the benefits of investing in international markets, which have experienced multi-year rallies in recent times.

The reduction in energy production and price volatility, resulting in lower energy revenues, has led to increased borrowing over time. S&P has stated that they expect the country’s budget deficit to grow, as revenue fails to match pace with expenditure growth. In 2019, however, the deficit is expected to narrow, based on higher revenue from energy sector and one-off sources according to S&P. Notably, the majority of T&T’s borrowing has been in the local currency, with TT$66.5 billion (72.0%) of T&T’s outstanding debt being borrowed from the domestic market, while TT$25.8 billion (38.0%) equivalent of outstanding debt has been sourced from external markets as at May 2019. 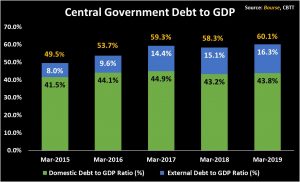 Economic growth is forecast to remain muted, with Moody’s citing a 1.5% growth in 2019 and between 1.5%-2.5% in the subsequent 2-3 years. The country remains highly dependent on the energy sector, with an added reliance on asset sales and dividends from state-owned enterprises. The good news is that Natural Gas production – T&T’s main hydrocarbon resource – is expected to increase from its current 3.8 bcf/d to 4.14 bcf/d in 2021.

One of the concerns raised by both credit rating agencies was the slow implementation of a single Revenue Authority to curb the high level of tax leakages and enhance revenue.

The overall impact of a lower credit rating – all else equal – is typically an increase in borrowing costs for the borrower. This is as a result of investors/lenders requiring a higher rate of return for bearing increased risk. While there has not yet been any significant reaction by investors holding T&T US-dollar international bonds, continued downgrades and/or loss in investor confidence could lead to yields on T&T bonds heading higher. Trinidad & Tobago (TRITOB) US dollar bonds due in 2024 and 2026 were offering a yield of 3.53% and 4.14% respectively, before the rating actions by both Moody’s and S&P. After the downgrade, yields have remained fairly stable at 3.52% and 4.36% for TRITOB 2024 and TRITOB 2026 respectively.