This week, we at Bourse review the latest financial results of two stocks within the Non-Banking Finance Sector, National Enterprises Limited (NEL) and Scotia Investments Jamaica Limited (SIJL). NEL experienced an upswing in earnings mainly due to an improvement in its TSTT joint venture while SIJL saw a fall in profits. We discuss the performances and provide a brief outlook. 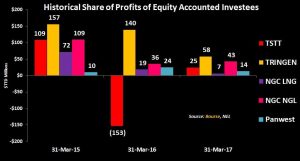 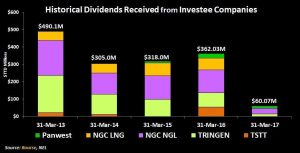 While ammonia exports (for Tringen 1 & 2) have been relatively stable in previous years, ammonia prices remain subdued. In 2016, average annual ammonia prices stood at US$235 /Tonne, 58% lower when compared to 2012 levels of US$560 /Tonne. Ammonia prices averaged US$265 /Tonne in the first quarter of 2017, still some way off the previous levels. Sustained lower ammonia prices could continue to weigh on Tringen’s contribution to NEL’s Share of Profit of Equity Accounted Investees.

Exports and prices of NGLs have reversed the downward trend for the first quarter of 2017. The price of NGLs, based on a weighted basket of propane, butane and natural gasoline, averaged US$90.34 cents per gallon during the first quarter in 2017, 62.1% higher when compared to the same period in 2016. Exports also saw an increase of 14.8%. Improved energy prices may help to stabilize the price of NGLs going forward.

Both NGC NGL and NGC LNG could see an improvement in revenue on account of an expected increase in gas production in the coming months. The performance of TSTT will also have a significant impact on NEL’s earnings going forward.

At a current price of $10.50, NEL trades at a trailing P/E of 35.0 times, higher than the Non-Banking Finance sector average of 10.2 times. NEL offers investors a trailing dividend yield of 3.33%. Total dividends paid for the financial year amounted to $0.35 per share. As at March 2017, NEL’s cash and cash equivalents stood at $348.1M or $0.58 per share. As such, NEL appears capable of maintaining its dividend payments in the near term. On the basis of expected improvements in LNG and NGL production, coupled with improvements in the performance of TSTT, Bourse maintains a NEUTRAL rating on NEL. 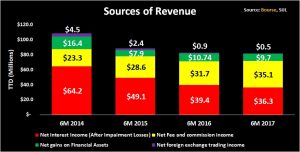 Scotia Group Jamaica Limited, the parent company of SIJL (77% ownership), has proposed to take SIJL private by cancellation of the shares held by minority shareholders at a price of J$38.00 per share. For shares listed on the Trinidad and Tobago Stock Exchange, shareholders will receive payment in United Sates dollars based on the weighted average selling rate for United States dollars published by the Bank of Jamaica three (3) business before settlement.

At a current price of TT$2.05, SIJL currently trades at a trailing P/E of 12.2 times, above the Non-Banking Sector average of 10.2 times (excluding NEL). This is also above SIJL’s three-year average P/E of 9.7 times. SIJL’s trailing dividend yield is 4.64%. SIJL pays dividends in USD, thus providing investors with a hedge against a depreciating Trinidad and Tobago dollar. On the basis of an attractive dividend yield and USD dividend payments, but tempered by a high P/E ratio and declining earnings, Bourse maintains a NEUTRAL rating on SIJL.