This week, we at Bourse recap the performance of the local and international equity market for the first six months of 2017. Although equity markets have been somewhat muted at the regional level, international equity markets have continued to advance despite several sources of potential concern. In the fixed income space, TT dollar interest rates remained relatively subdued, with the continuing theme of low asset availability. Internationally, US bond markets have thrived despite two US dollar interest rate increases in the first half of 2017. We take a closer look at the performance of some major markets below.

The Trinidad and Tobago Composite Index (TTCI) was relatively flat (down 0.03%) in the first six months of 2017, supported primarily by gains in the cross-listed stock index (CLX). The All T&T index – comprising stocks of T&T domiciled companies – retreated 2.4%, while the Cross Listed Index (CLX) appreciated 7.5% over the same period.

In terms of major movers for the first half of 2017, cross-listed securities accounted for three of the top five major advancers on the TTCI. JMMBGL was the best performer, advancing 36.7% by the end of the second quarter. Companies based in Trinidad and Tobago experienced the biggest declines, with One Caribbean Media (OCM) recording a  24.6% decline.

Investors were provided with an opportunity to participate in two Additional Public Offerings (APOs) in First Citizens Bank (FIRST) and Trinidad and Tobago Natural Gas Liquids (NGL). The FIRST APO was eventually undersubscribed, raising TT$1.025 billion out of an expected TT$1.5 billion. The recently concluded NGL APO, on the other hand, should generate well in excess of TT$845.2 million in proceeds.

The T&T economy continues to cope with economic contraction, on account of lower energy prices and a reduction in oil and gas production. In response to lower economic activity and with (reported) weak inflationary pressures, the Central Bank of Trinidad and Tobago has maintained the Repo Rate at 4.75%.

The performance of cross-listed securities, particularly companies based in Jamaica, might be attributable to improving economic conditions in Jamaica. The Jamaican economy has expanded over the last three years, public debt as a percentage of gross domestic product (GDP) has fallen and business and consumer confidence has improved considerably (albeit there has been a decline in business and consumer confidence for the first quarter of 2017). Economic growth in Jamaica is expected to continue at faster pace in 2017 according to the International Monetary Fund. 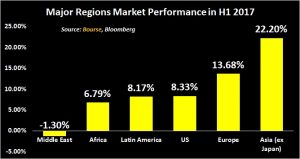 Globally, equity markets have rallied throughout the first half of 2017. Asian markets (up 22.2%) have led the rally, fueled by markets such as Korea (up 24.4%), India (up 22.1%) and Taiwan (up 19.3%). Investors who held Asian Equity Mutual Funds, such as the Savinvest India Asia Fund (managed by Bourse), would have benefitted from this rally.

Despite two interest rate increases by the US Federal Reserve, the US stock market (as measured by the S&P 500 Index) is up 8.33%. A declining unemployment rate of 4.3% continues to suggest improving economic prospects in the US, while core inflation also remains in check (1.7% as at May 2017). It should be noted, however, that forecast for US growth in 2017 was cut from 2.3% to 2.1% by the IMF in its April World Economic Outlook.

In Latin America, the markets have advanced 8.17%. Volatility remains elevated in the region, with developing news of another political scandal in Brazil involving the nation’s President. Despite these and other concerns, investors seemingly remain cautiously optimistic as to the fortunes of Latin American stocks.

Activity in the local bond space has remained subdued for most of the year. Investors remained starved for opportunities and yield, given the lack of domestic bond issues. The Government of Trinidad and Tobago issued just one bond via public auction in February 2017, a TT$1 billion 8 year bond with a coupon rate of 4.10%. The issue was oversubscribed by TT$414 million, with the bond issued at par value or a price of $100 (a yield to maturity of 4.10%).

The year-to-date returns on TTD fixed income investments also left more to be desired by investors. The TT 10-year treasury yield increased marginally from 4.36% in December 2016 to 4.38% in May 2017 while TTD Money Market Fund rates and deposit rates averaged 1.3% and 0.2% respectively. Moreover, the impact of inflation and a depreciating TT dollar pose downside risks to investment returns.

Though headline inflation appeared relatively contained at 2.8% in March 2017, further increases in inflation over time could erode returns for investors generating fixed returns. To avoid this, fixed income investors holding TT dollars would have to pursue longer dated bonds in order to generate positive real returns.

The limited array of investment options and low investment returns in the TTD bond market would undoubtedly encourage fixed income investors, with access to US dollars, to look beyond the local market to benefit from higher investment returns and a wider scope of assets.

Despite the upward trend in US interest rates since the start of the year, international bond markets have provided positive returns. The US Federal Reserve (the Fed) held to its mandate to increase interest rates. Though the US inflation rate (1.7%) is still below the Fed’s 2.0% target, the Fed is expected to hike rates one more time for 2017. Other Central Banks such as Bank of England and the European Central Bank also hinted at adopting a more aggressive monetary policy path, while the Bank of Japan maintained an accommodative stance. 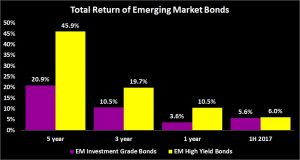 Notwithstanding this, EM high yield and investment grade bonds returned 6.0% and 5.6% year-to-date respectively. The strong performance was driven by improving fundamentals in emerging markets and heavier inflows by investors in search of higher yields. Though the impact of US rate increases has not derailed the rally in emerging market bonds, investors may be cautious when selecting new portfolio additions. Nonetheless, there may be opportunities for investors in USD denominated emerging market bonds suited to an investor’s particular risk profile and time horizon.

Positioning for the remainder of 2017

With the above drivers in mind, investors may be wondering how to position their portfolios going forward. Investors’ willingness to participate in the market will depend on their risk tolerance and investment objectives. Fortune would have favoured the brave in the first half of the year, with global equity markets shrugging off worries including slower growth in developed markets, low energy prices, rising interest rates and event risks. Risk-tolerant investors with access to US dollars may want to benefit from this momentum, seeing this as an opportunity to participate in global markets. High-yield US dollar bonds may also be of interest, particularly to investors with the capacity to adopt a hold-to-maturity investment strategy.

Investors with a lower risk appetite, who may be of the view that markets are at unsustainably elevated levels, may opt out of equity markets, investing instead in lower-risk ‘money-market’ mutual funds, or investment grade US dollar bonds.

Locally, market sentiment has remained negative, although certain stocks do present an opportunity based on their value. In this regard, investors are encouraged to hold stocks with (i) relatively low valuations (low P/E multiples), (ii) above-market dividend yields, (iii) low dividend pay-out ratios (ability to preserve dividends), (iv) lower/diversified exposure to the Trinidad and Tobago economy and (v) an implicit/explicit hedge against TTD depreciation. Stocks which currently satisfy these criteria include Trinidad and Tobago NGL (NGL), Sagicor Financial Corporation (SFC) and Massy Holdings Limited (MASSY), among others.

As always, investors should consult a trusted and experienced advisor, such as Bourse, to make a more informed investment decision.