Scotiabank Trinidad and Tobago Limited (SBTT) recorded an Earnings per Share (EPS) of $3.79 over the course of its 2019 financial year, a 4.4% year-on-year (YoY) increase from the EPS of $3.63 reported in the prior comparable period. 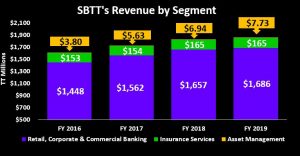 Approximately 90% of Scotiabank’s Total Revenue stream is attributed to Retail, Corporate and Commercial Banking, which grew from $1.45B in FY 2016 to $1.69B in FY 2019 or a Compounded Annual Growth Rate(CAGR) of 5.2%. Insurance Services and Asset Management round up the Group’s operations contributing 8.9% and 0.42% to Total Revenue respectively.

On 27th November 2018, SBTT announced an agreement to sell its insurance operations (ScotiaLife Trinidad and Tobago Limited) to Sagicor Financial Corporation (SFC), subject to regulatory approval and the close of the Alignvest Acquisition II Corporation’s acquisition of SFC. As at November 2019; both remain parties to the share purchase agreement established, in which Sagicor agreed to establish a 20-year distribution agreement for insurance products and solutions in T&T and acquire all outstanding shares of ScotiaLife Trinidad and Tobago Limited. The agreement is expected to be completed in 2020. 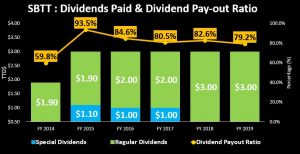 SBTT’s dividend history can be described as one of stability. Dividends have been supported by consistent earnings growth and an above-average Dividend Pay-out ratio, ranging between 79-94% over the past 5 years.

With changes to SBTT’s earnings capacity arising from the eventual sale of its insurance operations, it remains to be seen what (if any) effect this could have on future dividends. Investors might also consider the possibility of a special dividend, which could be paid from proceeds of the sale of ScotiaLife Trinidad & Tobago.

SBTT currently trades at a price of $60.00 and maintains a Trailing Price to Earnings Ratio of 15.8 times, greater than the Banking sector’s average of 14.8 times. The stock also offers a Trailing Dividend Yield of 5.0%, above the sector’s average of 3.9%. On the basis of a relatively attractive dividend yield, but tempered by above-average valuations and slowing revenue growth, Bourse maintains a NEUTRAL rating on SBTT. 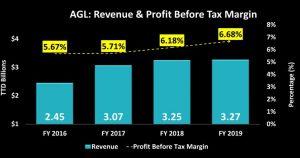 AGL’s revenue increase was driven by growth in its Fast Moving Consumer Goods segment and Industrial, Construction and Holding segment which improved 0.80% and 4.65% YoY respectively. This was slightly offset by a marginal decline in its Pharmaceutical and Personal Care Distribution segment. Agostini was able to report an 8.82% YoY improvement to its Profit Before Tax, demonstrating the company’s commitment to cost containment and operational efficiency. Over the past 4-years AGL has been able to consistently improve its Profit Before Tax Margin moving from 5.67% in FY 2016 to 6.68% in FY 2019. 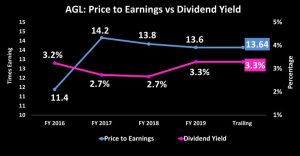 At a current price of $24.00, AGL trades at a trailing Price to Earnings ratio of 13.6 times, below the Trading sector’s average of 15.9 times. The stock also offers a trailing dividend yield of 3.3%, above the sector’s average of 3.0%. On the basis of relatively attractive valuations, but tempered by the ongoing challenging economic environment in relation to its business segments, Bourse maintains a NEUTRAL rating on AGL.