As Trinidad & Tobago’s Fiscal Year approaches its end (September 30th), this week we at Bourse present the first of a two-part series reviewing how the economy has fared. Today, we take a closer look at the Revenue side of the budget equation and how it has been impacted by the sharp fallout in the energy sector. We also review some of the extraordinary initiatives announced to address recurrent revenue declines and their progress. 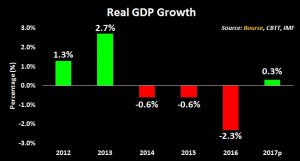 Following three consecutive years of negative Gross Domestic Product (GDP) growth of -0.6% (2014), -0.6% (2015) and -2.3% (2016), the International Monetary Fund (IMF) – in its World Economic Outlook dated April 2017- expects the Trinidad and Tobago economy to improve by 0.3% in calendar 2017. The projection is based on increased production from new natural gas fields, expected to be commissioned throughout the latter half of 2017. 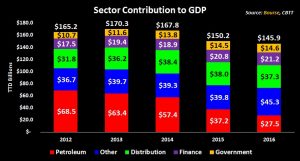 While most other sector contributions to GDP remained constant/improved over the past five years, the Petroleum Sector recorded a significant absolute and relative decline in contribution to GDP. Based on available data from the Central Bank of Trinidad & Tobago (CBTT), this sector accounted for TT $68.5B or 41% of GDP in 2012. In 2016 however, the contribution to GDP was reduced to $27.5B, equating to just 19% of the overall GDP figure of $145.9B. In contrast, all other sectors contributed TT$ 96.7B (59%) of GDP in 2012 and TT$118.5B (81%) in 2016. 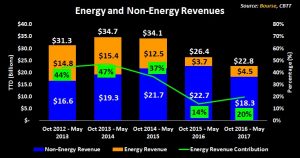 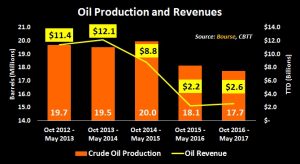 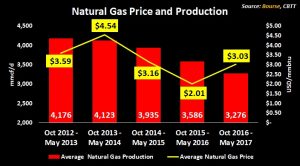 In an attempt to address the sharp decline in recurrent revenues, the Honourable Minister of Finance would have outlined various divestment initiatives in the 2016/2017 fiscal Budget and 2017 Mid-year Budget, which the Government set out to undertake throughout FY 2017. Among the successful initiatives was the 26% sale of Trinidad and Tobago NGL Limited (TTNGL) through the Additional Public Offering (APO). During the 2016/2017 fiscal Budget, it was announced that 51% of TTNGL would be sold. This was later revised to 26% in the 2017 Mid-year Budget. The APO would have raised approximately $845M, equal to the amount intended. The Government also offered 20% of its holdings in First Citizens Bank Limited for sale through an APO. However, only 13% was sold, raising $1.03B out of the proposed $1.55B.

Other divestment initiatives such as the sale of TGU (20%), eTeck (50%), CLF Group Assets and Lake Asphalt are yet to materialize, with understandably longer more complicated routes to execution.

In next week’s review, we take a closer look at Government’s expenditure and borrowing trends.